When life gives you lemons, make lemonade. When the Environmental Protection Agency stunts the growth of renewable fuels and forces you to keep halted construction projects in limbo, make an acquisition. That's exactly what Renewable Energy Group (NASDAQ:REGI) did by agreeing to purchase the assets of Fischer-Tropsch gas-to-liquids, or FT GTL, company Syntroleum. There are some assets that will make a nearly immediate impact, such as a 50% interest in a Dynamic Fuels joint-venture with Tyson Foods (NYSE:TSN), which also allow REG to directly compete with Darling International (NYSE:DAR) and Valero (NYSE:VLO) in renewable diesel. 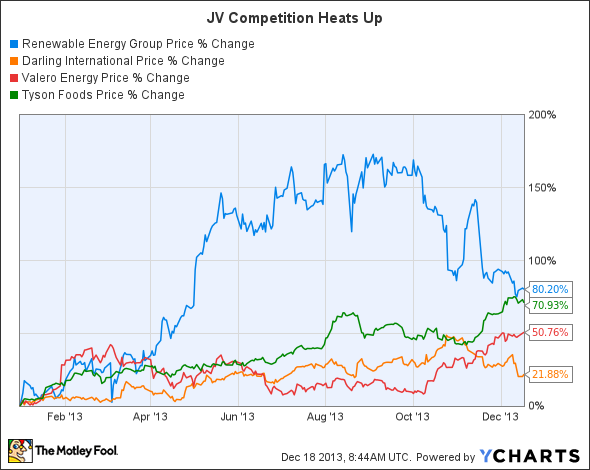 Then again, there are also assets that are difficult to fit into the company's current business plans, such as FT GTL technologies -- dependent on a licensing agreement with ExxonMobil -- that use natural gas or coal, rather than renewable feedstocks, to produce fuels. Given the seemingly divergent focuses, what can investors expect REG management, which has been extremely efficient with prior acquisitions, to do with Syntroleum's assets?

How Dynamic Fuels adds value
REG acquired virtually all of the assets and liabilities of Syntroleum for about 3.8 million shares, which could be reduced if the market value of the shares exceeds $49 million (an average share price of $12.91) or if less than $3.2 million in cash is transferred to REG. Therefore, we'll assume the maximum net value of the transaction is about $46 million. Considering that Dynamic Fuels owns a 75 million gallon per year renewable diesel biorefinery, of which REG now owns 50%, the acquisition price works out to a little more than $1.20 per gallon of annual capacity for a facility that cost $150 million to build.

That's virtually the same as prior acquisitions on a capacity basis, but it could turn into a steal. How?

REG owns the capital, knowledge, and personnel to run the Dynamic Fuels biorefinery in a way that Syntroleum could only dream of. While the facility sports an annual nameplate capacity of 75 mmgy, it has only produced 66.8 million gallons of renewable products since December 2010. A steady stream of delays contributed to higher than expected operating costs that shelved operations and ultimately placed the facility in standby mode over one year ago. Expect Tyson and REG to smooth out production and process kinks and begin production as soon as logistically possible.

A worker monitors a hydrogen compressor at the Dynamic Fuels facility. Source: Syntroleum.

Additionally, renewable diesel (fuel produced with 50% less lifetime greenhouse gas emissions than petroleum diesel and qualifies as an advanced biofuel) currently earns a $1.00 per gallon tax credit, while biomass-based diesel (traditional biodiesel) only earns $0.50 per gallon. That may or may not be extended in 2014, but advanced biofuels will continue to capture premium credits regardless.

Competition heats up for Darling and Valero
The acquisition of assets capable of turning renewable feedstocks into synthetic renewable diesel will allow REG to more directly compete with Darling International and Valero, which formed the Diamond Green Diesel joint venture that consumes 11% of the nation's used cooking oils and animal fats. Darling plays the part of feedstock supplier, while Valero offers the operational expertise to run the company's 137 mmgy renewable diesel biorefinery. Insert "Tyson" and "REG" to develop a similar storyline, although Dynamic Fuels is 45% smaller.

At any rate, I like that REG didn't sit idly by and watch the market supply of an important next-generation feedstock become controlled by a competitor. Tyson presumably has more waste animal fats and cooking oils at its disposal that can be upgraded into fuels. It will be interesting to see how the two proceed now that the nation's largest biodiesel company, rather than financially challenged Syntroleum, owns the technology to make it happen.

Consider the rest gravy
Will REG ever produce a drop of diesel or jet fuel from natural gas or coal? Perhaps, although without a specific vision outlined by management I don't see how FT GTL from fossil fuel feedstocks quite fits. The technologies still require substantial research and development investments to make it to commercial scale, and even that wouldn't guarantee market acceptance. Therefore, I think it's more likely that REG utilizes Syntroleum's FT GTL assets as they relate to biomass feedstocks. Maybe the company pursues the technology, or maybe it sells the assets in the future, but I just don't see natural gas or coal making an appearance as a feedstock any time soon.

Foolish bottom line
I think there is plenty to like about REG's recent purchase, even if it does increase outstanding share count by 10%. The acquisition won't use any of the $135 million in cash on the balance sheet, which could be a huge advantage assuming the Dynamic Fuel facility restarts operations in the first half of 2014. The longer term implications are even better for shareholders: The company's annual production capacity will increase from 257 mmgy to 294.5 mmgy -- with the gains comprised of higher-margin renewable diesel. It also cements REG's leadership position in the biodiesel industry by responding to increased competition from Darling and Valero on the supply of next-generation feedstocks. These are good times to be a REG shareholder.