Last month, beleaguered department store J.C. Penney (JCPN.Q) responded to concerns about overstuffed shelves with the corporate equivalent of "I meant to do that." However, the company has real inventory issues stemming from the hiring -- and quick firing -- of former CEO Ron Johnson. Cancelling Johnson's plans mid-stream has proven costly in multiple ways and these problems can be seen in one key metric - inventory turnover. But is it possible that this number isn't as bad as it appears? How does the company stack up to competitors such as Sears (SHLDQ), Kohl's (KSS -0.61%), and Macy's (M -2.71%) when it comes to inventory turnover?

Reuters mentioned analyst concerns about J.C. Penney's full racks in a piece last month and quoted the response from company spokeswoman Daphne Avila: "What one may misconstrue as clutter is merely a strategic effort to meet high customer demand."

However, attempts to undo Johnson's renovation plans -- and the $850 million borrowed in April to help purchase inventory --have led to a glut of merchandise that the company can only move through drastic reductions.

Here's a look at why investors should focus on J.C. Penney's inventory issues.

Where does J.C. Penney stand compared to industry peers such as Macy's, Kohl's, and Sears Holdings? 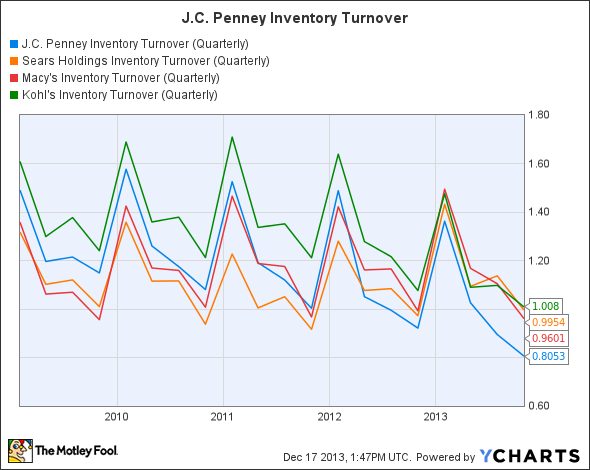 J.C. Penney was holding its own on turnover up until the early part of last year. That was shortly after Ron Johnson came aboard with hopes of breathing new life into the century-old company via Apple Genius Bar styled stores-within-stores. Johnson wasn't able to produce results fast enough, and his retraction of the company's generous coupon offers proved wildly unpopular. Johnson resigned early this year and former CEO Myron Ullman returned.

The inventory influx -- and the accompanying turnover slowdown -- was inevitable during the sort of transition that Johnson was planning. However, the decision to stop the transition midstream left the company with renovation levels of inventory without the actual renovation.

Disadvantage versus competitors
Macy's and Kohl's have maintained historically high inventory turnover, while Sears has stayed near the bottom of the pack. The former two stores benefit from having strong brands that lure particular shopping demographics. Macy's attracts more affluent shoppers than its competitors and benefits from the more relaxed spending. Kohl's appeals to younger shoppers with brands such as Lauren Conrad and Candie's combined with a strong promotional environment.

J.C. Penney and Sears share an identity problem. It's not that the companies lack any quality brands. The brands -- and in-store environments -- simply don't create enough of a pull to dissuade customers from shopping elsewhere. That's particularly harmful when consumer confidence and retail traffic are both low in general.

Same-store sales aren't really improving
J.C. Penney reported a nearly 1% same-store sales increase in the third quarter, which at a glance seemed a sign of life. However, as the Fool's Nickey Friedman pointed out, there was a devil in the details. The company reported that gross margin as a percentage of sales was down 3% year-over-year largely due to lower clearance margins. J.C. Penney had unsold inventory still hanging around from the prior two quarters and it needed drastic price slashing to get the products out the door. So that comps growth was more an act of CPR than a sign of life.

However, clearance deals weren't the only reason J.C. Penney's items left the shelves. The stores have become prime targets for shoplifters.

Shoplifting took one point off J.C. Penney's third-quarter profit margin because the company had stopped an RFID conversion due to costs. The problem was that the company had already removed the old tags from merchandise awaiting RFID so the halt resulted in a number of products without any anti-theft devices attached. J.C. Penney is working to place the old tags back on merchandise, but it would've been better served to finish the RFID process -- which offers better theft protection and inventory management -- despite the initial costs.

Foolish final thoughts
J.C. Penney can frame its overstuffed stores however it wants, but that doesn't change the fact that the company is doing an increasingly poor job of getting inventory out the door without drastic markdowns. This stubborn fact does not bode well for J.C. Penney's bottom line and investors need to pay close attention to any meaningful changes in this retailers' inventory turnover.