The Patient Protection and Affordable Care Act, otherwise known as Obamacare, is one of the most hotly contested pieces of legislation perhaps ever, but there is one thing people need to know before they make a judgment of the controversial plan: The nightmarish financial path that was the status quo.

There is no denying that the cost of health care in the U.S. has been traveling on an unsustainable path for the better part of the last 50 years. Consider the U.S. government's spending on health care as shown in the chart below: 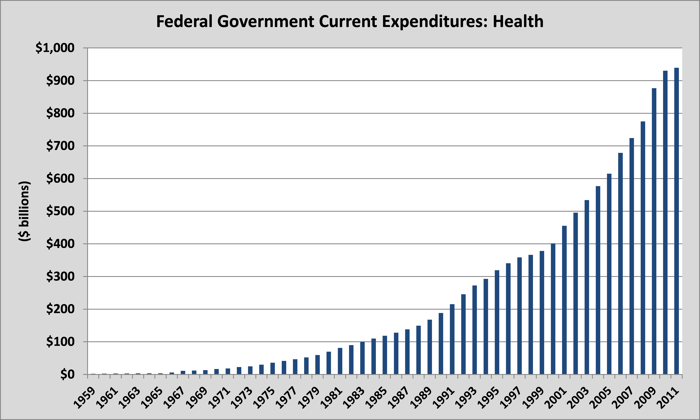 While it's easy to think that because of inflation, it's obvious that chart would look odd, but when shown on a comparable scale to total federal government spending, you can see how dramatically the spending on health care has outpaced total spending: 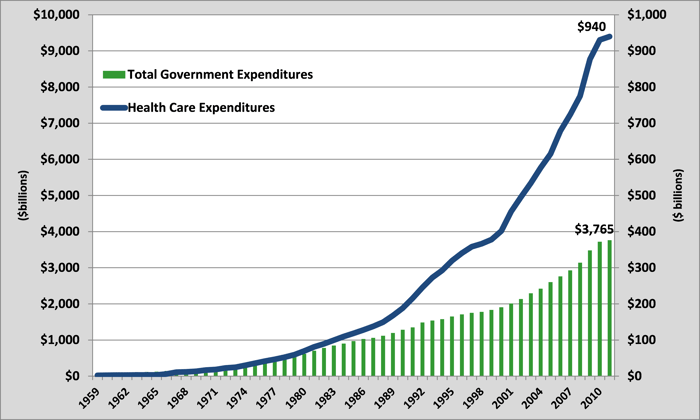 Health care expenditures of the federal government have risen on average by 12.4% per year since 1959, whereas total expenditures have only risen by 7.4% -- a 5% difference. But it isn't simply the government that's spending more on health care -- individual Americans are, too.

Consider that the personal spending on health care has risen from $1.2 trillion in 1999 all the way to $1.7 trillion in 2012, an increase of 50%. This is all while all other expenditures (excluding health care) have only grown by 33%: 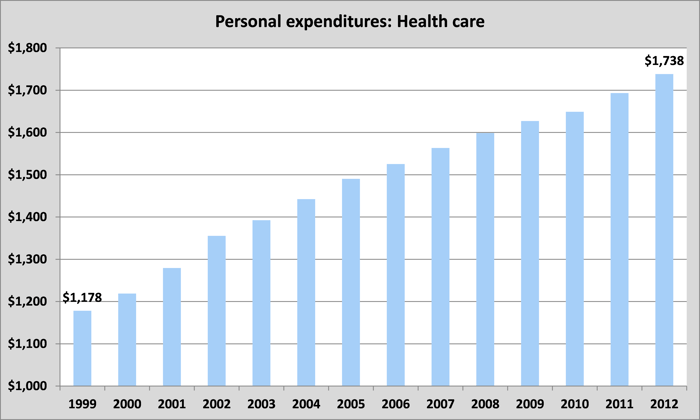 Yet it isn't as though the average American can easily keep up with this unsustainable growth in health care spending, as the median household income in the U.S. has actually fallen by almost 10% over the same time period: 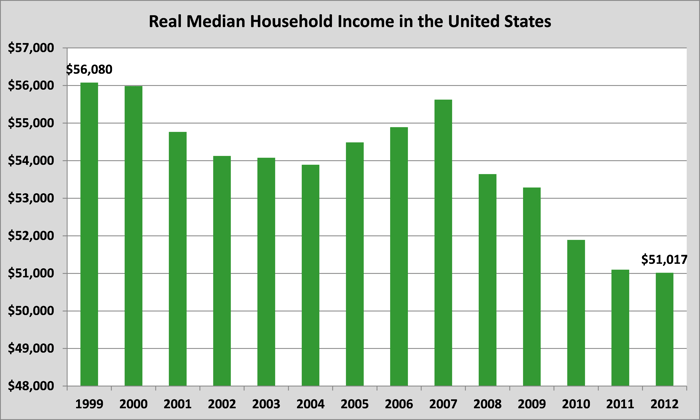 All of these trends led the bipartisan Congressional Budget Office (CBO) to estimate that while the U.S. currently spends 17% of its GDP on health care and related services, that number would balloon all the way to 40% by 2080. Even more troubling, it isn't even as though our health care system has led the to the best outcomes -- a healthier public -- as Bloomberg recently noted, "the U.S. spends the most on health care on a relative cost basis with the worst outcome."

No matter what you think of Obamacare, it's clear that something needs to be done about health care in the United States.

Moving forward
In all of this, we can see why President Obama and many politicians of both parties were so keen on attempting to change the health care system. There is no denying that the current rollout of Obamacare has seen problems, and it may in fact not even be the best solution. But there is also no denying that the health care system in America was (and still may be) spiraling out of control.

Many want to say that simply getting rid of Obamacare would fix all of our current problems, but the previously mentioned CBO also noted that repealing the Affordable Care Act -- as proposed in 2012 by John Boehner -- would actually increase the Federal Deficit by $109 billion between 2013 and 2022.

A June 2011 paper from the National Bureau of Economic Research, Jonathan Gruber, a former Mitt Romney advisory, noted simply when discussing the Affordable Care Act; "[w]hether these policies by themselves can fully solve the long run health care cost problem in the United States is doubtful. They may, however, provide a first step toward controlling costs -- and understanding what does and does not work to do so more broadly."

The reality remains that it is entirely too early to tell what the ultimate impact of Obamacare will be and whether or not it will be a success or a failure. But what we all must know is that health care in the U.S. needed to change, radically, as it was leading our country down an unstable path.

Read This Before You Judge Obamacare @themotleyfool #stocks Next Article
Current