Please ensure Javascript is enabled for purposes of website accessibility
Log In Help Join The Motley Fool
Free Article Join Over 1 Million Premium Members And Get More In-Depth Stock Guidance and Research
By Bill Stoller - Dec 27, 2013 at 8:33AM

It appears that Friday the 13th was a lucky day for shareholders of mall landlord Simon Property Group (SPG 1.12%). Simon is the largest publically traded REIT in the U.S., with ownership interests in 325 properties comprising about 242 million square feet. On the 20th anniversary of becoming a publicly traded company, CEO David Simon announced that the company plans to spin off to existing shareholders 44 smaller malls and all 54 Simon strip and open-air power centers into SpinCo.

How does SpinCo benefit shareholders?

Initially 70% of SpinCo net operating income, or NOI, will come from malls with the remaining 30% from the open-air centers. During the conference call, Mr. Simon made it clear that the open-air component will be the focus for SpinCo new development and growth. Additionally, some of the smallest mall properties may be sold as well.

SpinCo is a bit of a hybrid
Simon chose to use NOI of less than $10 million per year as the metric to decide which malls to be included in the spin-off. But in addition to the 36.4 million square feet of mall space, SpinCo also has 16.6 million square feet of power/strip centers. There really isn't another REIT with a similar dual asset class mix.

CBL & Associates Properties (CBL), and Pennsylvania Real Estate (PEI -2.34%) have similar mall assets. Based upon the size of the portfolio and the asset mix, it seems SpinCo's open-air properties have the most in common with some Federal Realty Trust (FRT) assets.

Federal Realty would be a great company to try and emulate with regard to adding value by redevelopment and new development of power centers. This REIT is a Dividend Aristocrat with an amazing record of 46 years in a row of increasing its dividend! The secret sauce has been selecting properties that are in areas of high income and population density. This has resulted in a sector leading $24.39 per square foot average for its 87 properties which total about 20 million square feet.

Equity REITs often viewed as peers in the open-air retail space include: Kimco, DDR, Regency Centers, and most recently Brixmor. However, they are primarily focused on grocery-anchored shopping centers. Each owns hundreds of properties with average base rents ranging from $17.56 to $12.44 per square foot.

Here is a snapshot of Simon compared to REITs with assets similar to SpinCo: 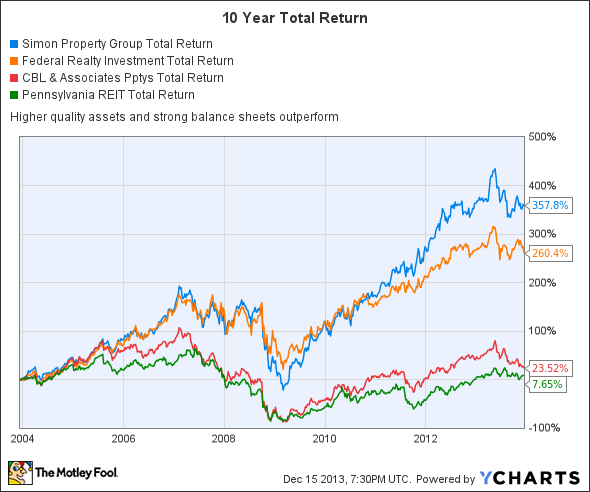 How do the enclosed malls compare?
The 44 enclosed Simon malls slated to become part of SpinCo have average sales of only $300 per square foot. Initially Simon Properties will manage the mall assets to provide continuity and complete ongoing projects. After two years, SpinCo can choose to manage them internally. One of the challenges to be dealt with is that the majority of these malls have Sears and J.C. Penney anchors -- a risk factor that also impacts sales per square foot.

CBL & Associates Properties has been a public REIT since 1993 and currently has a $3 billion market cap. CBL owns 127 properties totaling 82 million square feet with 93.4% occupancy. J.C. Penney is an anchor at 71 of the properties occupying over eight million square feet. CBL malls have average sales of $358 per square foot, with 25 malls under $300 per square foot. CBL has a debt to total market ratio of 55.7% and currently pays a dividend yielding 5.19%.

Penn REIT was initially listed as a publically traded REIT in 1970 and currently has a market cap of $1.2 billion. Its 30.3 million square foot portfolio is comprised of 36 enclosed malls and five power/strip centers concentrated in Pennsylvania. The mall average sale per square foot is $381, with 12 malls under $300 per square foot. Penn REIT has 26 Sears and 28 J.C. Penney anchor stores. Half of the Sears leases expire between now and 2016. Penn REIT has a debt to total market ratio of 54.6% and currently pays a dividend yielding 4.4%.

Investor takeaway
This 1:1 share spin-off seems like a great idea for existing Simon shareholders. When the SpinCo Form 10 is filed with the SEC, there will be more information for all investors to evaluate. I will be looking closely at the SpinCo mall component. Meanwhile, REITs with the Simon Property and Federal Realty business model -- own higher quality properties while maintaining a strong balance sheet -- have provided long-term investors excellent risk adjusted returns.

Bill Stoller has no position in any stocks mentioned. The Motley Fool has no position in any of the stocks mentioned. Try any of our Foolish newsletter services free for 30 days. We Fools may not all hold the same opinions, but we all believe that considering a diverse range of insights makes us better investors. The Motley Fool has a disclosure policy.