Over the past few weeks I have been working my way through the nine dividend aristocrats that are encompassed within the Dow Jones Industrial Average (DJINDICES:^DJI), and today I will discuss Johnson & Johnson (NYSE:JNJ). The health care products giant's consecutive dividend streak started back in 1977, and the current dividend is $2.82. The recent dividend increase will keep that streak going in 2014, giving the stock a yield of 3.05%. That is the 12th-highest yield on the Dow and above the index's 2.7% average.

Let's take a look at how Johnson & Johnson got here and then figure out whether this dividend is sustainable and can continue to be increased in the future.

The past
Johnson & Johnson has increased its dividend for 50 years, starting in 1963. The chart below shows the dividend's steady rise since 1985. 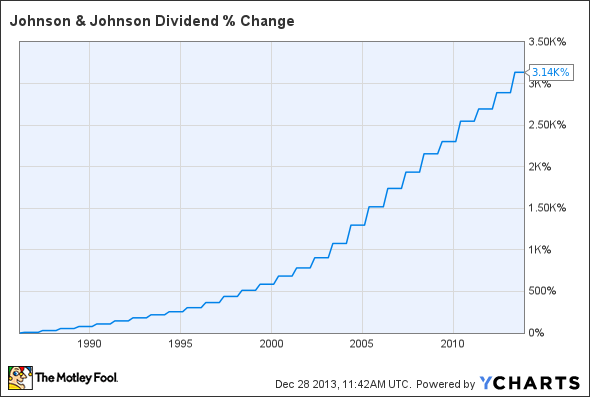 Many investors consider Johnson & Johnson to be one of the most stable companies within the market; and as you can easily see in the chart above, the dividend growth is like clockwork. But how has the share price performed over the same time frame? Let's see. 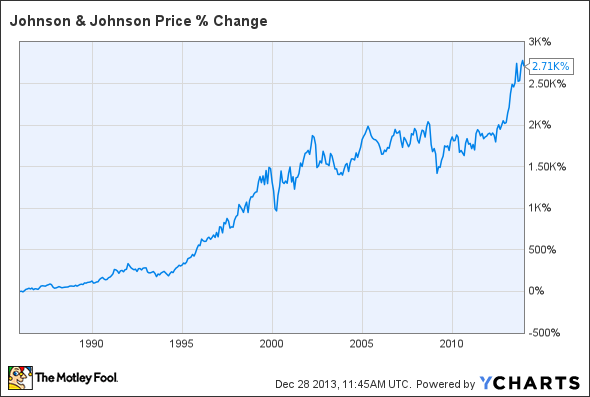 While there have been a few minor hiccups throughout the years, the stock has risen slowly but steadily. If you had been wise enough to purchase shares of Johnson & Johnson 28 years ago, your investment would have given you an annualized return of 12.6%. But if you had taken that one step further and reinvested the increasing dividend for the past 28 years, your return would have jumped from 2,710% to 5,059%, or an annualized return of 15.1%.

Johnson & Johnson has certainly been good to long-term shareholders in the past, but will the future be as bright?

The future
Analysts' expectations for the company aren't great at this time. Estimates for earnings per share for the fourth quarter of 2013 are only $0.01 higher than what Johnson & Johnson reported for the last quarter of 2012. First-quarter 2014 EPS is only expected to be 2.7% higher than in 2013, while revenue growth that quarter is supposed to jump 3.4%.

These figures may not seem remarkable, but when they are put into the context of a company the size of Johnson & Johnson, with a market cap of $260 billion, even what seems like a small amount of growth is really huge. Johnson & Johnson's revenue for the past 12 months is more than $70 billion. So a 3% sales increase in 2014 would mean more than $2.11 billion in additional revenue. That's about what Under Armour delivered over the past 12 months and slightly less than what rising fashion company Michael Kors posted.

A 3% revenue increase may be nothing for most companies, but that equals a massive increase for Johnson & Johnson and should allow the company to continue regularly not only paying, but increasing that healthy dividend.

Furthermore, given the company's size and brand dominance, investors don't need to worry that Johnson & Johnson will disappear anytime soon.