Please ensure Javascript is enabled for purposes of website accessibility
Log In Help Join The Motley Fool
Free Article Join Over 1 Million Premium Members And Get More In-Depth Stock Guidance and Research
By Hunter Hillman - Jan 1, 2014 at 8:00AM

Investors should be worried about fast food.

Major burger sellers have seen a remarkable run in the past year: McDonald's (MCD 0.43%) shares have increased 11%, Burger King Worldwide (BKW.DL) has shot up 43%, and Wendy's (WEN -2.94%) has posted a stunning 85% gain. Both Wendy's and Burger King outpaced their respective exchanges by 40% and 16% apiece, respectively. The average of the three industry leaders even outpaced the typical discretionary stock, as measured by the Consumer Discretionary Select Sector SPDR, which grew 40%. 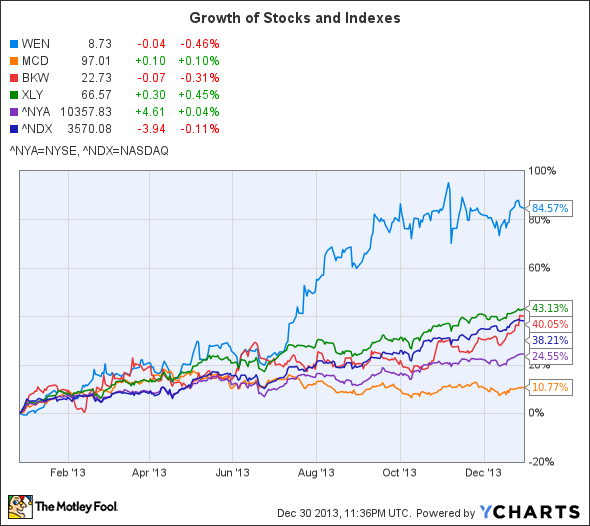 As we move into a new year, we have to wonder if these stocks can repeat their 2013 performance. In the course of our analysis, we'll look at what went right and where we'll see profits in 2014.

Where's the beef?
The U.S. is currently seeing a change in consumer dynamics when it comes to eating habits -- beef consumption has dropped precipitously. It peaked at 79.2 pounds per capita per year in 1985, and is projected to be only 53 pounds in 2014. Meanwhile, poultry consumption has increased as consumers become increasingly health-conscious.

"Burger" restaurants have responded by moving the focus away from the burger itself. Instead, they have emphasized other menu offerings. McDonald's followed a health-centric plan, pushing egg-white items and chicken wraps, even going so far as to eliminate its Angus line. Burger King followed a similar strategy, introducing turkey burgers and lower-calorie fries.Wendy's, however, took a different approach and focused on the burger buns, adding pretzel, flatbread, and brioche buns to its lineup.

These tactics have allowed all three companies to avoid the scourge of changing dynamics. In fact, each company posted significant year-over-year earnings increases. 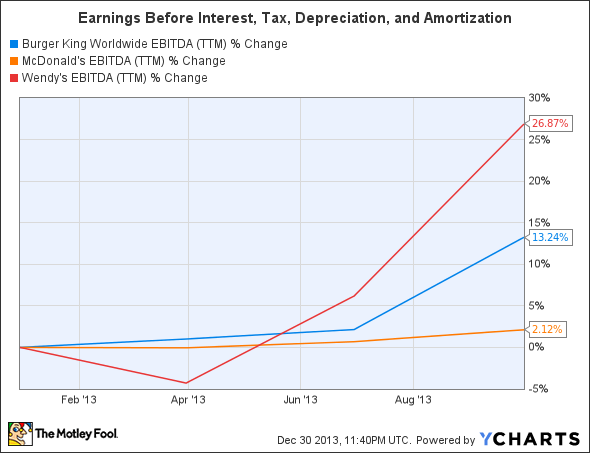 Aside from smart changes in menu offerings, the strong earnings have been the result of ongoing remodeling and rebranding efforts. Wendy's in particular has made a push to rebrand itself as a cut above the typical fast-food joint. The remodeling of its stores in conjunction with high-end menu offerings are intended to paint Wendy's as a mid-level grill with fast-food prices. Burger King and McDonald's have been more focused on healthy choices, which have generated revenue but have not resulted in the drastic improvements that Wendy's has seen.

Franchising
Earnings for all three companies will be highly reliant upon franchising. It's paramount for them to divest their corporate-owned stores to franchisees. As they do so, they cut costs and raise profit margins. For example, Wendy's plans to sell more than 400 stores to franchisees in 2014. This move will generate steady royalties and increase cash flow even though it decreases direct revenue.Burger King and McDonald's are far ahead of Wendy's in terms of franchising, so they don't have as much of an opportunity to cut costs and increase margins, although their reliance on franchising has translated into high earnings per share.

Valuation and growth potential
McDonald's, Wendy's, and Burger King trade at 23.4, 29.7, and 26.7 times their free cash flow, respectively. These are very high results, especially in relation to the relatively low free cash flow that each company holds (with the exception of McDonald's). This indicates that they are overvalued and do not have very large growth potential. None are very cheap in terms of their sale price.

In light of this, it's hard to envision a repeat performance by Burger King or Wendy's. Wendy's posted growth upwards of 80% in 2013 -- another increase of this level would put shares at around $15. Its earnings (although they have increased) are unlikely to justify such a high price. Look for Wendy's to increase in the short run, but as prices rise past $10, investors should short the stock. In the long run, Wendy's should settle around its current price -- not too high, not too low.

Burger King is in a similar situation. It is cheaper than Wendy's, but its earnings will not support a high share price. New offerings will keep customers coming but won't increase earnings. Burger King is likely to fluctuate around its current price.

McDonald's is in a different situation entirely. In 2013, it grew the least of the Big Three. Its increase in price could probably be explained by market forces rather than innovation or earnings increases. However, it is the safest of all three stocks. Despite an off year, McDonald's posted steady earnings increases and a steady price increase. On top of this, it possesses remarkable free cash flow, to the tune of more than $4 billion. Slow but steady growth is to be expected from Mickey D's, and if McDonald's applies its free cash flow to investment, then we could see an increase in earnings that would support an increased share price.

Foolish summary
For the most part, we've reached the limit of the Big Three burger stocks. It's hard to see Burger King or Wendy's posting any significant increase, so investors should put their money elsewhere. McDonald's seems to be a safe long-term bet given its financials, but if investors are trying to make a substantial profit, they should look outside of this industry.

Hunter Hillman has no position in any stocks mentioned. The Motley Fool recommends Burger King Worldwide and McDonald's. The Motley Fool owns shares of McDonald's. Try any of our Foolish newsletter services free for 30 days. We Fools may not all hold the same opinions, but we all believe that considering a diverse range of insights makes us better investors. The Motley Fool has a disclosure policy.