Darden’s underperformance might make it a sell, while Bloomin Brands and DineEquity are going strong.

Darden Restaurants' (DRI 0.63%) patchy performance continued as the company recently posted dismal second-quarter results. Let's take a look at how it performed and its performance as compared to peers such as Bloomin Brands (BLMN 3.00%) and DineEquity (DIN 2.46%) to see which of them are good buys in this space.

Darden in trouble
Darden, which owns and operates restaurant chains such as Red Lobster, Olive Garden, LongHorn Steakhouse, and The Specialty Restaurant Group, appreciated just 13% in 2013 as at the time of this writing. Of the three competing restaurant companies it has the lowest year-to-date gains, as shown in the chart below. 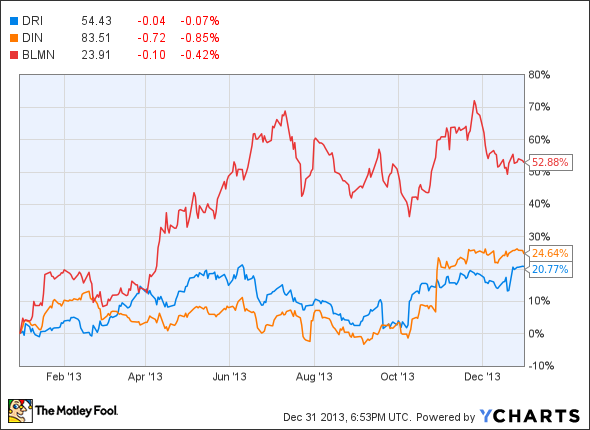 Due to weak results, Darden finally yielded to pressures from activist investor Barrington Capital Group to spin off its Red Lobster chain, which had seen same-restaurant sales decline 4.5% in the previous quarter.

Darden posted consolidated revenue growth of 4.6% year over year to $2.0 billion, primarily fueled by new-unit openings and 4.1% comps growth in the specialty restaurant group. However, just like in the first quarter, Darden failed to match up to the revenue estimates.

The problem
According to Fish and Seafood Trends in the U.S., a new report from market-research firm Packaged Facts, retail sales of fish and seafood products increased from $13.3 billion in 2008 to $14.7 billion in 2012. However, per-capita consumption of fish and shellfish decreased from 16 pounds per capita in 2009 to about 15 pounds in 2011. This decline can be attributed to shrinking wallets as a result of uncertain economic recovery and a stubborn job market.

This could perhaps be one of the reasons why the Red Lobster chain was the worst performer, registering a 5.2% decline in sales, despite attempts at promotions and adding non-seafood items to the menu to attract more customers. In addition, it expects that comps for the year will decline 4% to 5% for Red Lobster. As a result of falling sales and profits, Barrington Capital Group, which owns more than 2% of Darden shares, proposed that Darden spin off both Red Lobster and Olive Garden, to which Darden has yielded in part by agreeing on Red Lobster.

Darden also has heeded other requests from Barrington. For example, it will be suspending investments in new Olive Garden units beyond the ones which are already in progress. It will also be slowing down unit growth at LongHorn and in the specialty restaurant group. This will free up approximately $100 million in cash per year to be returned to shareholders. In addition, Darden will increase savings by at least $60 million annually, which is $10 million more than previously announced.

Bloomin Brands is looking good
Bloomin Brands, on the other hand, significantly outpaced the Knapp casual dining index for sales and traffic by approximately 210 basis points and 400 basis points, respectively. The company is confident that it will continue to perform well despite weakness in the casual-dining industry by taking away market share from others. It has been entering markets currently occupied by Red Lobster, including Connecticut, Massachusetts, and Rhode Island.

Bloomin Brands is also making significant progress towards its 2013 goal of at least $50 million in savings. In the third quarter, the total amount saved was approximately $16 million, bringing the year-to-date total to approximately $42 million. On the back of good strategies and marketing initiatives, revenue increased 1.5% for the third quarter to $968 million, and the company reported adjusted diluted earnings of $0.10 per share. This represented a 43% increase in earnings versus the prior year.

In the third quarter, Bloomin Brands opened 14 new system-wide locations, including six Bonefish Grill locations; three Carrabba's; one domestic Outback; two international Outbacks, one each in South Korea and Mexico; one new Brazilian location; and one international franchise restaurant. In 2014, the company plans to have 45 to 55 new openings.

In addition, during the third quarter, Bloomin Brands acquired a 40% additional stake in its Brazilian joint venture, thus bringing the overall position to 90%. Brazil is a very important market with great growth potential. This is a thriving business by all measures, being in operation for more than 15 years and employing more than 5,000 Outbackers. Management believes that the size of this business can double in the next five years to at least 100 restaurants.

DineEquity is also decent
DineEquity also reported a terrific third quarter. The owner of Applebee's and IHOP posted adjusted earnings of $1.10 per share, comprehensively beating analysts' estimates by $0.18 per share.

Comps at IHOP were positive for the second consecutive quarter, increasing by 3.6%. This is the largest gain since the first quarter of 2008. The comps at Applebee's were down marginally.

DineEquity is focused on increasing business at Applebee's, which is why it launched a joint venture with ESPN to introduce ESPN Fan Zones at Applebee's restaurants across the country. Moreover, 6% of restaurants have been remodeled, and there are plans to remodel the rest by the end of 2014.

Takeaway
All in all, Darden doesn't look like a very good investment proposition right now, as the company is being forced to sell off its underperforming chains. Comparatively, both Bloomin Brands and DineEquity are showing good growth and performing ahead of expectations, making them more lucrative buys in this space.

Amal Singh has no position in any stocks mentioned. The Motley Fool owns shares of Darden Restaurants. We Fools may not all hold the same opinions, but we all believe that considering a diverse range of insights makes us better investors. The Motley Fool has a disclosure policy.