The latest buyout vaults transportation services company to the top of the intermodal services industry.

Another day, another acquisition by XPO Logistics (XPO 0.13%). The transportation services specialist announced that it would acquire Pacer International (PACR.DL) for $335 million, a deal that would make it the third largest intermodal services providers in North America, one of the fastest-growing areas of transportation logistics.

The acquisition is the 11th one being made by XPO since it was created two years ago by Bradley Jacobs, a financier that has a knack for turning small growth stocks into major industry stalwarts. He took United Waste Systems and grew it through rollups until it was acquired by Waste Management and repeated the formula with United Rentals, taking it from a small equipment rental company to a national player by buying up smaller shops.

It's the same game plan he's executing now with XPO, which is rolling up rivals under its growing umbrella. The deal with Pacer will double its revenues to $2 billion annually, putting it well on its way to its stated goal of becoming a $4 billion to $5 billion company in just a few years' time.

In buying Pacer for $6 per share in cash and $3 of XPO stock for each share they own, the logistics specialist receives in return the ability to provide rail services and gives it a large fleet of domestic containers that can be transported by both truck and rail. Pacer facilitates approximately 10% of all domestic intermodal freight movements, and it's the largest provider of intermodal services between the U.S. and Mexico, including through a contract with Union Pacific, where it acts as the railroad's network logistics manager for automotive parts shipments.

It also turns XPO essentially from a non-asset-based logistics services provider to one that -- nominally, anyway -- is an asset-light provider. Where XPO previously relied primarily on third-party providers for its services, Pacer brings with it fleets of double-stack railcars, containers, and chassis. 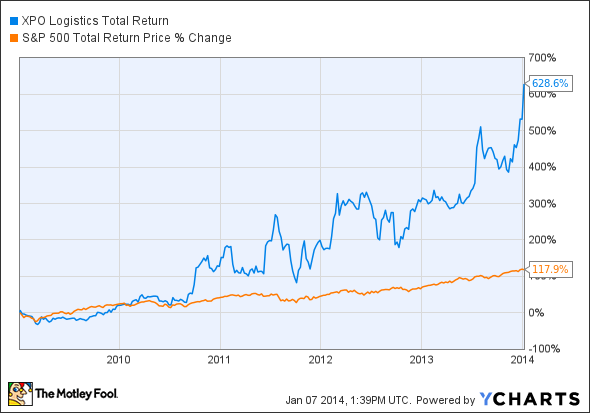 While XPO's CEO has been wildly successful in his growth-by-acquisition pursuits, perhaps because he's exited before problems arise, such strategies are never a problem till they're a problem. A company that grows mainly by buying others, which Jacobs has admitted is the primary means by which XPO will expand, is always a yellow flag regardless of how successful someone's been.

Having established itself now as a premier intermodal leader, we can wait to see which comes first: XPO Logistics makes its next acquisition, or it gets bought out by a larger rival.

Fool contributor Rich Duprey has no position in any stocks mentioned. The Motley Fool recommends and owns shares of Waste Management. It also owns shares of Pacer International. We Fools don't all hold the same opinions, but we all believe that considering a diverse range of insights makes us better investors. The Motley Fool has a disclosure policy.