One Netflix critic sees a potential problem with the DVD division's profit margin. Can Netflix investors ignore this particular risk and still sleep at night?

Is Netflix (NFLX 0.21%) running a huge risk in the DVD mailing division?

I came across a Seeking Alpha article in which Netflix was presented as a short-sale opportunity. Nothing wrong with that; shorting is a healthy market mechanism, and I've recently argued that the stock might be up for a temporary correction anyway. But this article lists risks that simply don't exist. Here's the most glaring error I found, and it's one that might ring true to investors who don't actually follow Netflix very closely.

If someone spending $30 a month on a DVD plan decides to lower the number of discs they get, maybe they only will spend $20 a month, hypothetically. ... [B]ecause of these wide prices, one subscriber loss doesn't just equal $8 or so a month like a normal streaming sub. They could easily lose two or three times that revenue a month, or more.

So Netflix stands to lose a substantial amount of money if DVD subscribers start downgrading their juicy $44 monthly plans to a cheaper alternative. OK, sure. But how big is that perceived risk in reality?

The company does offer DVD plans ranging from $4.99 a month (one disc at a time, maximum two per month) to $43.99 (eight discs at a time, no monthly limits). Netflix doesn't break down its reported numbers to the detail level of plan-by-plan membership counts, but you can get a sense of the relatively low risk by calculating the average monthly revenue per paid subscriber dating to 2011. Let's throw in streaming plans here for good measure: 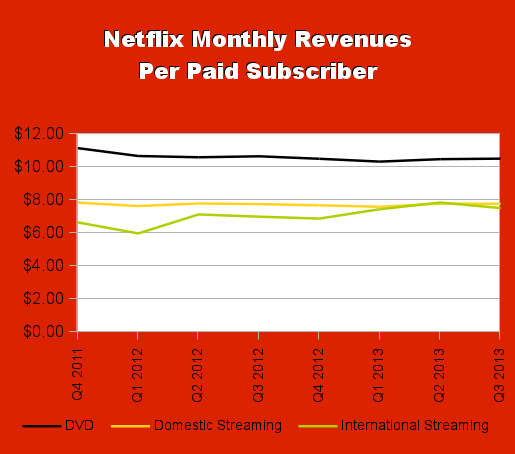 Sure, the Seeking Alpha thesis is playing out -- but it isn't hurting Netflix very much. On average, Netflix customers have settled for something less than the $11.99 two-disc plan ever since the infamous Qwikster split between streaming and mailing services.The average member already settles for something far less than the $30 DVD plans that SA worried about losing, and just a smidgen above the unlimited one-disc plan at $7.99. DVD cancellations is the real risk here, not pricing choices, and Netflix seems comfortable with watching the DVD segment shrink down to a niche operation as streaming takes over.

The other takeaway here is that international subscriptions have pretty much reached parity with the domestic plan. Early overseas expansions moved Netflix into territories such as South America and the Caribbean, where consumers are price-sensitive and Netflix has reported trouble even collecting its fees. Later forays into markets like the U.K. and Scandinavia gave Netflix access to higher-quality subscribers, so pricing has stabilized on a global level.

So if you're looking at a short play on Netflix, make sure you're basing it in reality. You might worry about Amazon.com supporting its Prime subscription service with a massive marketing budget, which is something Netflix would have to take very seriously. Amazon has the budget to really harm Netflix, but then Netflix has always shown the wiles to fight back against superior forces.

The Blockbuster battles of 2007 spring to mind. Even Wal-Mart signed over its DVD subscription customers to Netflix because throwing money at the project didn't work. Big budgets don't always guarantee winning every war. Amazon might fare better than Blockbuster and Wal-Mart, having learned from the past. I still wouldn't invest on that thesis, but you can disagree and still make sense.

But a mass migration of DVD subscribers to lower-cost plans is not something to worry about. Place your bets elsewhere.