If you follow the cruise industry, then you're likely well aware of Royal Caribbean's (NYSE:RCL) Quantum of the Seas, which is due to sail in November 2014. That might be a long time from now, but there are several reasons for investors (and travelers) to be excited.

Thus far, Quantum of the Seas has generated more excitement than Norwegian Cruise Line's (NYSE:NCLH) Norwegian Getaway (maiden voyage Jan. 16) and Carnival (NYSE:CCL) Princess Cruise's Regal Princess (maiden voyage May 20). Furthermore, Royal Caribbean was wise to look at Walt Disney (NYSE:DIS) Cruise Line's success in one area and capitalize on it, prior to its closer peers doing so.

Impressive features
There is an important clue as to why Royal Caribbean's Quantum of the Seas is likely to hold more potential than any other new ship sailing in 2014, but let's first take a look at what makes this ship special.

The standout and most talked about feature is the North Star, which is a mechanical arm that lifts up to 14 passengers toward the sky for bird's-eye views of the ship, ocean, and stars. This feature was inspired by the London Eye.

As far as Royal Caribbean wisely copying Disney, this pertains to Quantum's virtual balconies for 373 interior cabins, which offer real-time ocean views. This concept originated on the Disney Dream and Disney Fantasy ships in 2011. Royal Caribbean didn't think it would be a success, but as is the case with most Disney concepts, it exceeded expectations. Once Royal Caribbean saw that people liked the virtual cabins, it hopped on the bandwagon.

Quantum's Two70 Degrees is a unique approach to entertainment. If you visit this floor-to-ceiling panoramic-windowed space during the day, you'll be treated to great views and a relaxing environment. At night, the space is transformed with music, light shows, and various forms of entertainment.

The Music Hall will feature live performers and DJs, as well as theme parties and pool tables. If you're a thrill seeker, you can skydive (virtually) with RipCord by iFLy. If you want good ol'-fashioned fun, check out the SeaPlex, which will offer bumper cars, roller skating, a basketball court, dancing, and even a circus school. Other features include an indoor pool, an outdoor pool, and an adults-only solarium. Additionally, cabins will be 9% larger on average compared with other Royal Caribbean ships.

All of these features are big selling points for travelers, which is good news for investors in regards to potential. Speaking of potential...

Early high demand
Travel agency Cruise Holidays asked 133 members about the most highly anticipated ship for 2014. The overwhelming response: Quantum of the Seas. More important, Cruise Holidays also reported that bookings for the ship have accounted for almost 20% of all bookings for 2014. If these numbers are accurate, then it should lead to strong momentum for Royal Caribbean. Better yet, that momentum should continue, since Anthem of the Seas is due to sail in the fall of 2015.

Now let's take a look at some peer comparisons from an investing standpoint.

Royal Caribbean vs. peers
Royal Caribbean offers significant growth potential. For example, look at how steady it has been on the top line over the past five years: 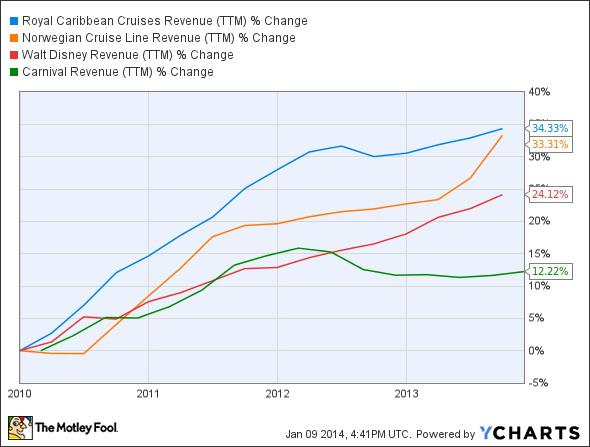 It should also be noted that Norwegian Cruise Line has closed the gap over the past year. Carnival, on the other hand, has consistently lagged its peers.

One negative for Royal Caribbean is that it's currently trading at 142 times earnings, making it very expensive. Norwegian Cruise Line is also expensive, trading at 103 times earnings. Carnival is trading at a more reasonable 29 times earnings, but it's still attempting to rebuild its reputation after several at-sea missteps. Disney, by the way, is trading at just 23 times earnings. And, of course, it offers a lot more diversification with its exposure to film and television entertainment, theme parks, and merchandising. Disney might be lagging Royal Caribbean and Norwegian Cruise Line on the top line, but the gap isn't substantial. If you combine this with Disney's multiple, it appears to offer the best value.

What might surprise you is that while Disney offers a dividend yield of 1.10%, this isn't as generous as Royal Caribbean's yield of 2.10%, or Carnival's yield of 2.50%. Norwegian Cruise Line doesn't pay a dividend, as it's reinvesting its available capital into its business for continued growth.

The bottom line
If you don't mind risk, then you might want to consider looking into Royal Caribbean despite valuation concerns. A generous dividend doesn't hurt, either. Since Norwegian Cruise Line is using its cash flow for business reinvestment, it might offer more top-line growth than Royal Caribbean in the near future. However, keep in mind that Quantum of the Seas, and then Anthem of the Seas, might prove to be significant growth catalysts for Royal Caribbean. If you're more risk-averse, and you're determined to invest in a cruise line, then consider the broadly diversified Disney, currently trading at 23 times earnings.