2014 is still young, but Netflix (NASDAQ:NFLX) analysts on Wall Street have been busy in the last two weeks. Unfortunately, that doesn't mean that they've been giving investors much helpful information.

Two recent analyst moves, by Richard Tullo of Albert Fried & Company and Scott Devitt of Morgan Stanley, show why investors should be wary of relying on Wall Street brokerages for investing insights. Both analyst moves had little or nothing to do with changes in Netflix's prospects -- which is the only thing that matters for long-term investors.

Walking away
On Dec. 31, longtime Netflix bear Richard Tullo decided that his New Year's resolution would be to stop covering Netflix! Tullo has been adamant in his negative view on Netflix; even in late October, when the stock was soaring toward $400, Tullo retained a $122 price target. (That represented his prediction for where the stock would be a year later.)

Tullo has repeatedly argued that Netflix will be unable to support its rising content costs over the long term. He also thinks investors are ignoring the threat from other streaming video services like Hulu, Amazon.com's Prime Instant Video, and Time Warner's HBO GO. However, Tullo apparently got tired of losing to the market, stating, "I am dropping NFLX because for me the shares are a waste of time and my mistake is covering NFLX."

While Tullo's frustration is understandable, it's hard to justify dropping coverage of a stock just because you don't like how it's performing. Tullo would have served his clients better by trying to understand why the stock rose so much in spite of his concerns. If he still felt confident in his original analysis after doing so, then he should have stuck with his bearish call.

A little late to the party
Analysts at Morgan Stanley offered their own strange take on Netflix last week. Scott Devitt and his team downgraded Netflix to "underweight" and set a $310 price target, arguing (like Tullo) that competition from Amazon, Hulu, and HBO GO will cut into Netflix's growth.

Taken alone, this argument makes a lot of sense. I spent much of 2013 urging investors not to underestimate the threat from Amazon and to recognize that Netflix is approaching a point where saturation will lead to slower domestic growth.

However, the timing of Morgan Stanley's bearish move is odd. Amazon made some big moves to acquire high-quality content during 2013, but most of those occurred in the first half of the year. For example, on Feb. 1, Amazon announced that it would be the exclusive streaming home of the popular period drama Downton Abbey.

Less than two weeks later, it announced that it would be streaming new episodes of Under the Dome just four days after their initial broadcast. Finally, in June, Amazon said that it had won streaming rights for popular Viacom children's shows including Dora the Explorer and SpongeBob SquarePants. These shows had been available on Netflix until just a few days earlier.

In spite of this threat that has been growing for at least a year, Devitt and his team were bullish on Netflix as recently as September. What's changed since then? It's true that valuation had something to do with Morgan Stanley leaving the bull camp; by the time of the recent downgrade, Netflix was trading at $360. However, Netflix had been priced around that level (or higher) since late November! 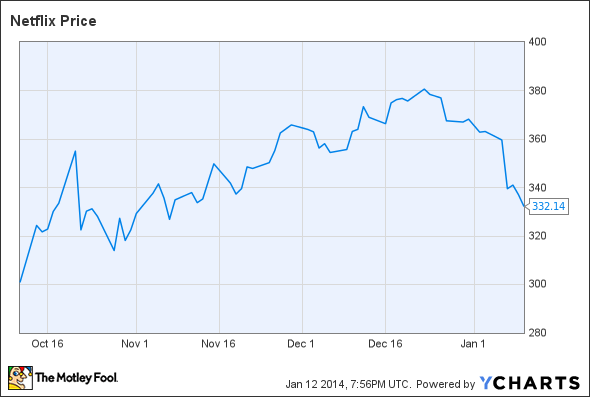 The most plausible explanation for the delayed downgrade is that the Morgan Stanley team was afraid of fighting a momentum-fueled rally. Rather than raise their concerns about Netflix while the stock was in a dizzying upward spiral, they chose to wait until the rally fizzled -- Netflix stock had fallen about 5% in the two weeks before they downgraded it.

Focus on what matters
It's easy for individual investors to become thoroughly confused by trying to follow advice from Wall Street analysts. Yet while a Wall Street analyst's job description seems clear -- predict how certain stocks will perform -- in practice it's not that straightforward.

The extreme volatility of Netflix stock has encouraged Netflix analysts to lose track of the long-term picture. In the last two weeks alone, one analyst has stopped covering Netflix after getting fed up with the stock, while another downgraded the stock based on developments that occurred nearly a year ago. Long-term investors would be better off tuning out this Wall Street noise and focusing on Netflix's fundamentals and long-run prospects.