2013 was a good year for GE, which continues to focus on its industrial business and should be poised for a better 2014.

The Dow Jones Industrial Average (^DJI 0.09%) is trading 0.39% higher as the market digests economic data and earnings reports today. U.S. housing starts fell 9.8% to 999,000 in December from the previous month. Despite the drop, it was still higher than economists' expectations of 975,000 starts. To keep this in perspective, housing starts in 2013 were up 18.3% from 2012 levels. In other news, U.S. industrial production rose 0.3% in December from the previous month, which was in line with expectations, and production was up 3.7% for the year. Keeping with the theme, here are some industrial companies making headlines Friday as we close out the trading week.

General Electric (GE 1.10%) is 2.7% lower in midafternoon trading despite posting a strong fourth-quarter earnings result. General Electric reported this morning that revenue was up 3% in the fourth quarter to $40.4 billion, and up to $146 billion for the full year. The company also posted operating earnings of $5.4 billion, or earnings per share of $0.53.

Two things stuck out in GE's report: value returned to shareholders and its industrial business. GE's industrial segment profit rose 12% to $5.5 billion, with six of its seven segments reporting positive earnings growth. Moreover, GE's backlog of equipment and services hit a record high at $244 billion; that's a $15 billion increase from the last quarter.

As far as returning value to shareholders goes, General Electric has been consistent. As it continues to repurchase shares and increase its dividend, it will form an "X" when charted. 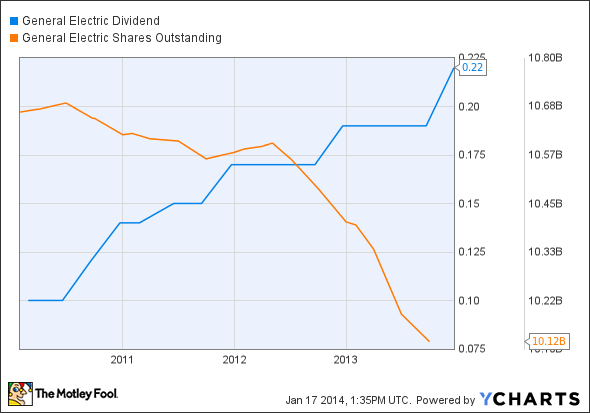 During the fourth quarter GE announced a 16% boost in its quarterly dividend, which was its fifth increase in slightly more than three years. GE also repurchased $10.4 billion of stock. Between the buyback and dividend payouts, the company dished out $18.2 billion in value back to shareholders.

Fool contributor Daniel Miller has no position in any stocks mentioned. The Motley Fool owns shares of General Electric Company. Try any of our Foolish newsletter services free for 30 days. We Fools may not all hold the same opinions, but we all believe that considering a diverse range of insights makes us better investors. The Motley Fool has a disclosure policy.