Best Buy bulls have recently valued the company as if it is primed for long-term growth. Last week, they got a costly reality check.

Nothing about electronics giant Best Buy's (BBY 0.15%) strategic situation changed very much last week. At the beginning of the week, it was a struggling company with stagnant sales facing robust competition from competitors like Wal-Mart and Amazon.com. At the end of the week, that was still the case. However, you wouldn't know that from Best Buy's stock performance. 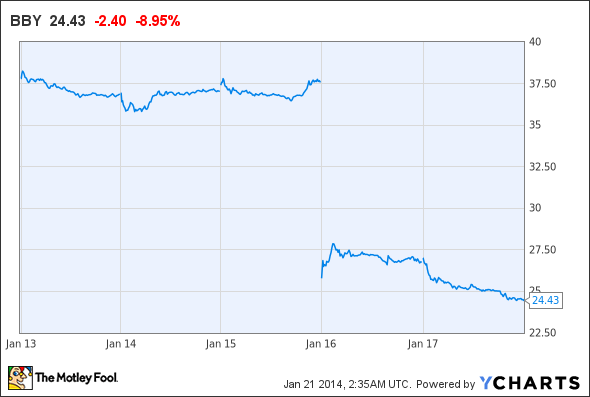 Best Buy stock plunged 35% in the span of two days last week after it gave an update on its holiday performance. This holiday update highlighted the depth of its challenges, but the only surprising thing about it was that so many investors were surprised! Before last week's plunge, Best Buy was being valued like a growth company, which it has not been for years. Best Buy's big drop merely corrected its valuation to a more defensible level.

Best Buy has been hit hard by the growth of e-commerce.

Second, discounters like Wal-Mart, Target, and even Costco like using big-ticket electronics items as loss leaders during the holiday season. With the 2013 holiday season being particularly competitive, all of these stores could feel some pressure on their holiday quarter profit margins. However, electronics items are just a small part of their businesses, and these chains are consistently profitable throughout the year.

A terrible quarter
Up until last week, Best Buy analysts and investors seemed to ignore this risk. At that time, analysts projected that the company would grow earnings ever so slightly this quarter. Investors rewarded this expected earnings growth with a generous earnings multiple that peaked at about 17 times forward earnings.

As it turns out, both the earnings estimates and the valuation multiple were too optimistic. On Thursday, Best Buy announced that domestic comparable-store sales dropped 0.8% for the first nine weeks of Q4, comprising the key holiday selling period. Meanwhile, heavy "investments" in price competitiveness undermined Best Buy's profitability, leading to a drop of 175 to185 basis points in Q4 adjusted operating margin.

Going the wrong way
Best Buy's management noted hopefully last week that online sales are growing rapidly (up 23.5% in the nine-week holiday period) and that the company gained market share during the period. However, the heavy discounting seen throughout the electronics industry -- such as big Black Friday iPad sales at Wal-Mart and Target -- did not stimulate additional consumer spending. Instead, it just compressed margins.

Best Buy's Q4 results should clarify for investors the depth of Best Buy's dilemma. Even after slashing hundreds of millions of dollars in annual costs, Best Buy still cannot compete on price with Amazon, Wal-Mart, and other discounters without severely damaging its profit margin.

Best Buy's operating margin was 1.9% through the first three quarters of FY14, and its Q4 results suggest that its full-year operating margin will land around 2.5%. After accounting for interest and income tax, Best Buy's profit margin will be barely more than 1%. Best Buy may gain market share this way, but its victory will be Pyrrhic, because it won't be able to earn back its cost of capital.

Foolish bottom line
Throughout the holiday season, Best Buy executives have been fond of saying that "price competitiveness is table stakes." In other words, if Best Buy wants to be a winner in the U.S., it needs to prove to customers that its prices are just as good as Amazon's or Wal-Mart's.

If that's really the case, Best Buy should find another table with a lower ante. Best Buy would be better off gradually losing market share and downsizing in order to protect its profit margin than following its current strategy. A long-term market share battle plays right into the hands of Best Buy's better-capitalized competitors.

Best Buy Is Shrinking: Time to Sell the Stock?
376%