Investors love stocks that consistently beat the Street without getting ahead of their fundamentals and risking a meltdown. The best stocks offer sustainable market-beating gains, with robust and improving financial metrics that support strong price growth. Does Anadarko Petroleum (NYSE:APC) fit the bill? Let's take a look at what its recent results tell us about its potential for future gains.

What we're looking for
The graphs you're about to see tell Anadarko's story, and we'll be grading the quality of that story in several ways:

What the numbers tell you
Now, let's take a look at Anadarko's key statistics: 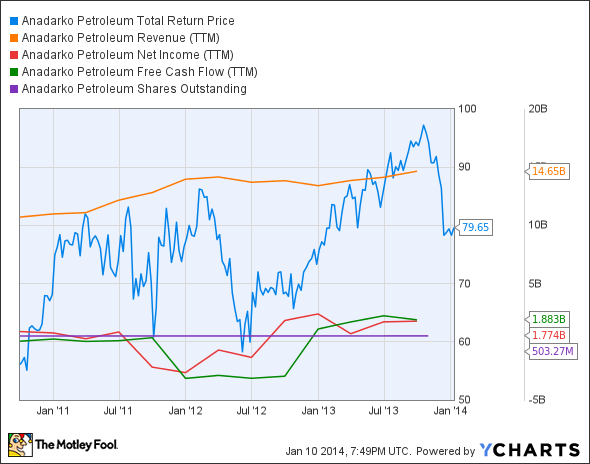 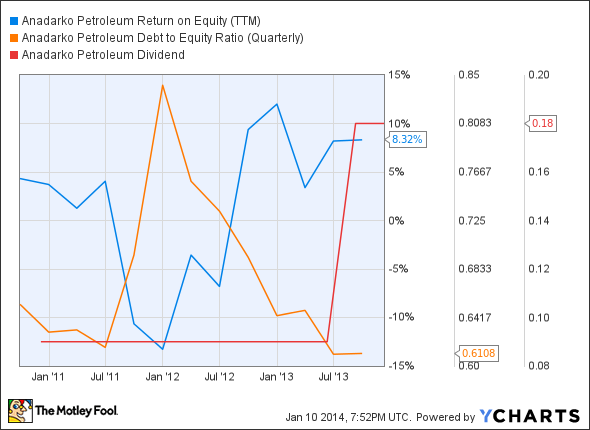 How we got here and where we're going
Anadarko Petroleum comes through with flying colors, as it's picked up a rare perfect score on this test with all nine possible passing grades. Anadarko's revenue has boomed over the past three years, but the company's done even better on the bottom line -- the company's trailing 12-month nominal free cash flow is actually higher than net income at the moment. This strong progress has allowed Anadarko to double its dividend payments while maintaining sustainable free cash flow payouts. This is a great performance, but will Anadarko be able to maintain its progress? Let's dig a little deeper to find out.

Anadarko boasts a strong portfolio of domestic and international assets, with dominant positions in key U.S. onshore shale plays and the Gulf of Mexico. Fool contributor Arjun Sreekumar notes that the company's Wattenberg and Eagle Ford assets might continue to deliver substantial profits over the next few years, thanks to strikingly low development costs of just $13 per barrel of oil equivalent (BOE). Anadarko still has plans to drill more than 2,500 Eagle Ford Shale wells over a span of about nine years at its current rate of exploration. The company also holds the Caesar/Tonga, Lucius and Heidelberg oil fields in the Gulf of Mexico, which add up to about three million gross acres in the region. Anadarko has also recently installed a production facility in the Keathley Canyon block, while it's doubled its economic interests in the Gulf's Shenandoah basin. The Lucius and Heidelberg oil fields could start producing by 2015 and 2016, respectively, further adding to the company's resource flow.

Additionally, Anadarko has discovered massive amounts of oil in the TEN complex -- Tweneboa, Enyenra and Ntomme off the shore of Ghana -- as well as in the Teak and Akasa fields north of the Jubilee field in the same waters. The company is also involved in production and development activities in Algeria's Sahara desert regions as part of the Groupement Berkine partnership, and it's already producing oil from the Ourhoud, HBNS and El Merk fields in the region. Fool contributor Matt DiLallo notes that domestically focused oil producers could face more downsides as oil production from the Permian Basin might push prices to as low as $70 per barrel in 2014. On the other hand, internationally diversified producers like Anadarko should be well-positioned to withstand lower U.S. oil prices, due to OPEC policies aimed at keeping petroleum prices over $100 per barrel worldwide.

On the other hand, Anadarko sold off 14,000 acres in the Pinedale natural gas field to Vanguard Natural Resources (NASDAQ: VNR) for $581 million, at a price roughly half that of a similar sale made by other parties in 2012. The company also swapped 50,000 acres in the northern and eastern parts of the DJ Basin with Noble Energy, providing the latter a more competitive position in the play thanks to a tighter centralization of its field facilities. Anadarko also divested its stake in one Mozambique gas field to fund key onshore U.S. shale plays, such as the high-growth Eagle Ford in Texas and Colorado's Wattenberg field.

Rising natural gas prices could also help Anadarko reap more profits from its Brasada natural gas processing plant. However, over the past few quarters, global LNG facilities have faced many challenges, from high development costs to buyers' hesitancy toward long-term contracts. Arjun Sreekumar notes that Anadarko's Mozambique LNG project experienced a major setback after Japanese customers expressed a reluctance to sign long-term deals amid policy-driven uncertainties. The Mozambique national gas company is also fighting for a greater interest in its gas fields, which may lead to reduced profits for Anadarko. Larger oil producers have had similar problems -- Chevron's (NYSE:CVX) Gorgon LNG project and ExxonMobil's PNG project in Papua New Guinea have each exceeded their budgets due to high labor and development costs.

Worse still, Anadarko could be liable for damages of anywhere from $5.2 billion and $14.2 billion to the creditors of Tronox (NYSE:TROX), which was spun off by Anadarko-acquired Kerr-McGee in 2005 to divest liabilities. As a result, Moody has downgraded its outlook on Anadarko's debt to "developing," citing the negative repercussions on its cost of capital. This weight, more than any other, seems likely to undermine Anadarko's perfect score next year. Investors will have to dig deep into legal matters to determine whether or not today is still a good day to buy Anadarko's shares.

Putting the pieces together
Today, Anadarko Petroleum has many of the qualities that make up a great stock, but no stock is truly perfect. Digging deeper can help you uncover the answers you need to make a great buy -- or to stay away from a stock that's going nowhere.