Science loves a great story. Archimedes leaping from the bath, shouting "eureka!" The apple that dropped on Isaac Newton's head. Alexander Fleming's accidental discovery of penicillin in a petri dish. These discoveries and many others, distilled to that one big breakthrough, show luck and genius coming in ways that spark our ambition and make us believe that with the right mind-set, we might one day make a big breakthrough as well.

But that's rarely the way that science actually works. Penicillin was a shot in the dark, but it took years of trial and experimentation for scientists and chemists to turn that discovery into the first mass-produced antibacterial drugs. The story of genome sequencing might not have the same "eureka!" moment of one lone genius and one big breakthrough, but it's no less compelling -- and, in the long run, it may be of even greater value to the human race than the accidental penicillin in the petri dish. Let's explore that story and its implications now.

Unlocking the human code
The story of genome sequencing is one of a contest and a cost. The Human Genome Project was one of the costliest "contests" ever held, a multibillion-dollar government-led effort to sequence the entire human genome -- which was nearly beaten to the punch by a private company called Celera, with far fewer resources but far more ambition. The story of the race to sequence the genome became the subject of The Genome War, which followed Celera leader Craig Venter on his failed quest to be first. The "cost" is simply how much it costs to sequence a full genome, and it has been falling at an incredible rate since the first full genome was sequenced over a decade ago: 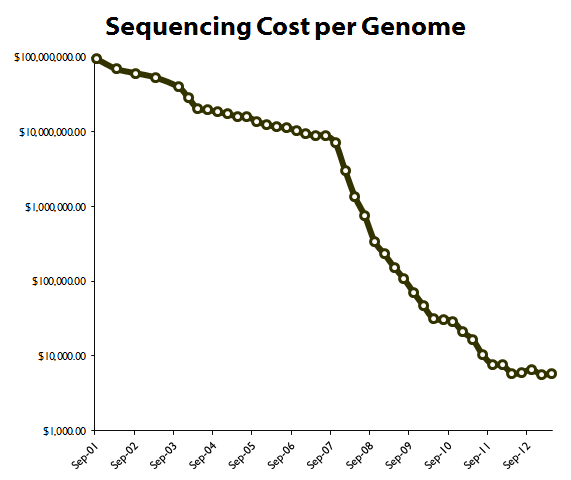 This graph is represented as a logarithmic scale, which is a popular way to show exponential growth (or shrinkage) in numbers. If genome sequencing costs had merely proceeded to fall at exponential rates, then the line would make a fairly uniform downward slope from left to right. I first wrote about this progress two years ago, a day after Life Technologies (NASDAQ: LIFE) -- since acquired by Thermo Fisher Scientific (NYSE:TMO) -- announced the impending release of a $1,000-per-genome sequencing machine. At the time, sequencing costs were still declining rapidly, and the available data showed that the $1,000 genome would arrive no later than the start of 2014.

That estimate may turn out to be more accurate than I anticipated. Last week, sequencing leader Illumina (NASDAQ:ILMN) announced the launch of its HiSeq X sequencing machine, which is designed to process 20,000 genomes a year for $1,000 apiece. The Life Tech machine that received so much hype two years ago was not actually able to meet the $1,000-sequence claim at first, as it would only sequence the entire exome, which is just the portion of DNA that codes for proteins. There's a lot of useful information in the exome, but it comprises only a small slice of the whole genome.

Illumina's new sequencer, the HiSeq X Ten, promises to reach this figure inclusive of all various external costs beyond the directly necessary materials when used "at scale," which essentially matches the National Human Genome Research Institute's (NHGRI) cost-calculation methodology. However, reaching scale may take time -- one of the device's launch customers told Forbes that full capacity and the promised $1,000-genome level won't be hit till next year.

That tracks with my calculations for sequencing cost declines, which have now been revised with new data to reflect a slight flattening of the cost curve since 2010. While 2014 might have been an ambitious target for the $1,000 genome, 2015 is still well within reach, and from there onward, costs are bound to continue declining: 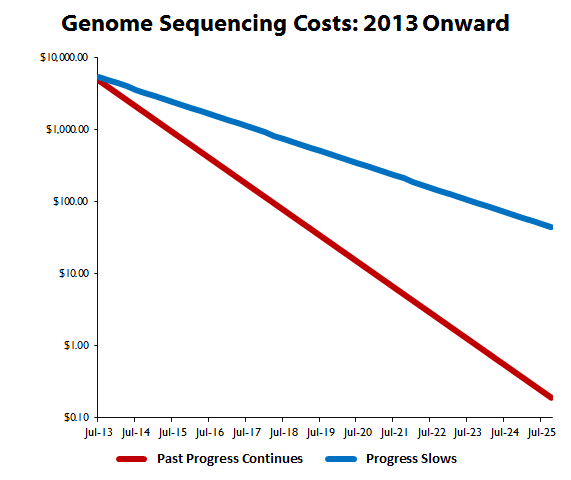 Before we examine what this means, let me first explain how these projections came about. The baseline assumption of continued progress simply calculated the average periodic cost decline from the NHGRI's data. The more conservative estimate cut that decline in half. As you can see, even if progress does slow -- which seems unlikely, as it would push the $1,000 genome out to late 2017 when it's already a near-lock for next year -- the total cost to sequence an entire human genome is going to fall below $100 by the middle of the next decade.

Knowing the code
It stands to reason that a process that becomes cost-competitive with many other standard medical screenings ought to become a standard screening itself. There are obstacles that must be overcome before that can happen, which I covered two years ago, but none of them are insurmountable. Indeed, plunging sequencing costs are likely to give rise to a robust genomic-analysis industry built to minimize the time between sequencing the genome and understanding it. Our scientific understanding of the genome is presently somewhere closer to the accidental discovery of penicillin than it is to understanding its effect on the body and producing it in commercial quantities, which is why low-cost genome sequencing is so important -- our understanding will grow as our data improves, and more genomes from more people will be the best raw data science can get.

Once low-cost genome sequencing is properly paired with analytical tools that can make sense of the millions of genomes that will be processed at sub-four-figure costs, the human race can finally begin to understand what makes its bodies tick. This won't be easy, but software solutions to other big data problems are already advancing at impressive rates, and the genome is one of the most fundamental big data problems for the human race to solve. Storing one genome's worth of raw data would require roughly 750 megabytes of space. If we went out and sequenced the genomes of all the world's seven billion-plus human beings, we'd have about 4.8 exabytes worth of data, or about 500,000 times the amount of text stored in the Library of Congress. That's if we only sequence each human once -- if genome sequencing becomes routine, millions of people will likely have their genome sequenced dozens of times throughout their lives to identify changes that might require medical intervention. You might think that this is a lot of data to handle, but it's only about three months' worth of the world's mobile data traffic today. 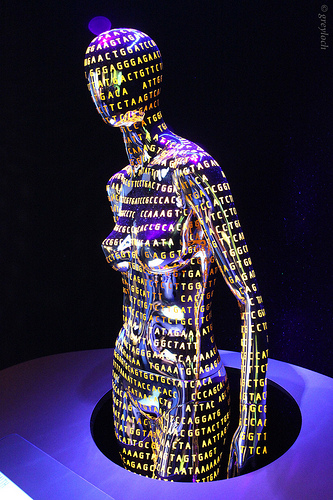 Understanding the most basic components of the human body ought to allow us, in time, to tweak those components. Human augmentation and modification -- transhumanism -- is an important component of the technologies that will drive the future, and it will also force society to adapt to the changes wrought by those technologies in profound ways. You can read more about transhumanism in the latter sections of "The Shape of the Future," but let's highlight very briefly some of the more obvious human defects that would be targeted for correction by advanced genomic techniques.

Aging and its associated ailments are high on the list for this sort of modification. Why do we age when some organisms can effectively remain biologically young forever? Once we understand how the genome ages us, why can't we modify it to make ourselves biologically young forever, too? Gerontologist Aubrey de Grey has championed the Methuselah Mouse Prize for over a decade. It has already succeeded in producing mice with lifespans over twice as long as those of normal mice using techniques far more primitive than would be available to scientists working with a full understanding of individual mouse genomes and how to modify them. That's just a starting point -- de Grey hopes to one day enable humans to "oscillate between being biologically 20 [years old] and biologically 25 indefinitely."

A world of thousand-year-old young adults may seem like the stuff of dystopian science fiction, but identifying and fixing a child's inherited conditions before birth would be just as popular with millions of young parents as living longer might be for their grandparents. The Genetic Disease Foundation identifies over 6,000 inheritable genetic disorders, and nearly eight million babies are born worldwide with serious genetic defects each year. There are already specialized genomic screenings for some of these defects -- Sequenom's (NASDAQ: SQNM) MaterniT21 tests look for several rare abnormalities, including Down Syndrome, and the company also markets a cystic fibrosis carrier screen for potential parents -- but they remain a small slice of a very large and diversely defective pie. Identifying defects is the first step. Fixing them is the logical next step.

Author and futurist Ramez Naam has one of the best books on the subject of human enhancement in More Than Human, and it's a highly recommended read for anyone interested in the technical, biological, and social aspects of transhumanism. One of Naam's core arguments in this book is that changing our human source code isn't something to be feared, but something to embrace -- provided, of course, the proper ethical safeguards are in place:

Far from being unnatural, the drive to alter and improve on ourselves is a fundamental part of who we are. As a species we've always looked for ways to be faster, stronger, smarter, and longer lived. Every past enhancement -- from transfusions to vaccinations to birth control -- has been called unnatural or immoral. Yet over time we've become accustomed to these new levels of control over our minds and bodies, and used them for the betterment of ourselves, our families, and our world... Embracing our quest to understand and improve on ourselves doesn't call into question our humanity -- it reaffirms it.

How will we use the $1,000 genome? What progress will the $100 genome make possible? For many of us, the answer will be found in our lifetimes -- and not too far in the future, either. We should start thinking about how to answer these questions now.