In the past year, Jack in the Box has seen its stock rise comparably to Chipotle, while industry heavyweights McDonald's and Yum! Brands' stock prices stagnated for much of the same time period. Unlike many of its competitors in the fast-food sector, Jack in the Box is still a growth story and could rise much higher in 2014.

In the past year, Jack in the Box (JACK 0.56%) has soared more than 76% for shareholders -- nearly matching the stock performance of its competitor Chipotle Mexican Grill (CMG 1.04%). In contrast, fast-food Goliaths McDonald's (MCD -0.54%) and Yum! Brands (YUM -1.33%), owner of KFC, Pizza Hut, and Taco Bell, have struggled in the same time period to just keep up with the S&P 500 index's 25% increase -- with each experiencing single-digit stock gains.

Unlike many of its peers within the quick-service restaurant industry, Jack in the Box is still a long-term growth story and could potentially pop much higher in 2014 and beyond.

2013 fourth-quarter earnings beat estimates in earnings per share and revenue, coming in at $0.45 and $338 million, respectively. It also marked the fourth straight quarter where Jack in the Box beat EPS expectations.

During its presentation, Jack in the Box highlighted many of its priorities, innovations, and plans going forward for both its Jack in the Box and Qdoba restaurant concepts. Both concepts are already the second-largest  quick-service hamburger chain and fast-casual Mexican concepts, respectively, by profits, margins, and returns.

Franchising has been a key priority for several years under CEO Linda Lang, who retired from the company at the beginning of this year. In an effort to increase margins and decrease general and administrative expenses, Jack in the Box has gone from a 46% franchised company in 2009 to 79% today. The company stated that its long-term goal is to be 80%-85% franchised, and restaurant operating margins can easily increase 100 basis points to reach approximately 19%.

Innovations for the company include menu changes and service speed. Jack in the Box is drifting away from discounts and coupons in favor for more limited-time offers. The company believes it can easily trim a minute off its average speed of service, which significantly lags rivals McDonald's and Yum! Brands' Taco Bell by more than a minute each. 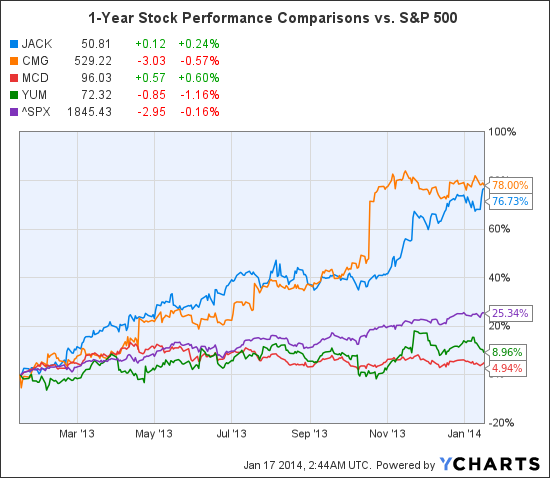 Jack in the Box data by YCharts

Jack in the Box versus...
Qdoba is the bigger growth story within the company since it only contributes 17% of total earnings. Jack in the Box believes the long-term growth potential for Qdoba is to grow its 615 locations to 2,000 across the U.S.

Chipotle has a stronghold on the Mexican fast-casual restaurant sector. However, Qdoba is still growing quickly in its own right, with same-store sales beating out the Jack in the Box concept last year 0.8% to 0.3%, respectively.

Qdoba's greatest strength may be in the diversity of its menu. While Qdoba and Chipotle have comparable burritos, Qdoba's quesadillas, nachos, salads, and even breakfast offerings help differentiate the brand and to compete against Chipotle.

Furthermore, Yum! Brands' Taco Bell serves as a market indicator for the expansion opportunity for Qdoba. Same-store sales grew 8% for Taco Bell in 2012. Yum! Brands has a long-term goal to increase its 5,000 Taco Bell locations to 8,000 in the future.

There are 34,923 McDonald's locations worldwide and counting. Within the U.S., there are more than 14,100 locations. However, there are only 2,251 Jack in the Box locations within just 21 states. The tremendous market opportunity is further highlighted by the fact that in big markets like Washington, D.C., the closest Jack in the Box is more than 300 miles away in Statesville, N.C.

Late-night focus increases growth opportunities
Jack in the Box is an outlier within fast food. While many of its peers focus on hours of operation, Jack in the Box is mostly a 24/seven operation. This gives the company an enormous advantage when many competitors are closed.

During the ICR XChange presentation, the company stated it is doubling down its focus on a late-night initiative, which began late last year. The late-night version of Jack in the Box takes place between 9 p.m. and 5 a.m. and includes unique music, new lighting, and different employee uniforms.

Because the company believes in serving anything on the menu at anytime of day, this offers additional perks. The ability to have breakfast anytime of day could be the leverage Jack in the Box needs for the customer who is deciding between an egg and cheese biscuit or a hamburger.

Recently, the American Trucking Association estimated that the trucking industry will increase 2.3% this year and continue growing over the next decade. With more truckers on the road looking for meal options in the middle of the night, Jack in the Box could be in the perfect spot to capitalize on the late-night crowd.

Bottom line
Jack in the Box has well-positioned its two restaurant concepts to capitalize on the $200 billion fast-food industry. The company's franchise goals are already paying dividends in reduced costs and an improved profit margin. It is able to differentiate each brand against industry rivals like Chipotle, Yum! Brands, and McDonald's.

However, its renewed focus to capture late night may still be underestimated by analysts and shareholders. Late night already makes up more than 15% of all Jack in the Box sales. Therefore, Jack in the Box isn't reinventing the wheel  -- it is just making it better.