Despite McDonald's stock overcoming lackluster earnings, unsettling news from China's manufacturing sector has the Dow diving deep into the red.

What happened to the market's momentum? That's what investors are asking today in the midst of a horrible outing from the Dow Jones Industrial Average (^DJI 0.02%), which has lost 210 points as of 2:30 p.m. EST. All but a select few blue-chip stock have fallen in a gut-churning plunge that hasn't discriminated by industry, as stocks across nearly every sector are in the red. Still, a few picks have managed to outperform the market: McDonald's (MCD -0.42%), despite reporting underwhelming earnings, has managed to claw its way to slight gains by midafternoon, while IBM's (IBM 0.27%) hanging flat after a big sale of its own. Let's catch up on what you need to know.

Volatility runs amok
First, let's dive into what's behind the market's broad plunge today. The market's "fear indicator," the CBOE Volatility Index (^VIX), or VIX, spiked 10% after China's manufacturing sector fell unexpectedly in January. It's a big shift for the VIX, which had fallen drastically over the past five years as investors have grown more confident about the market's direction in the aftermath of the recession. 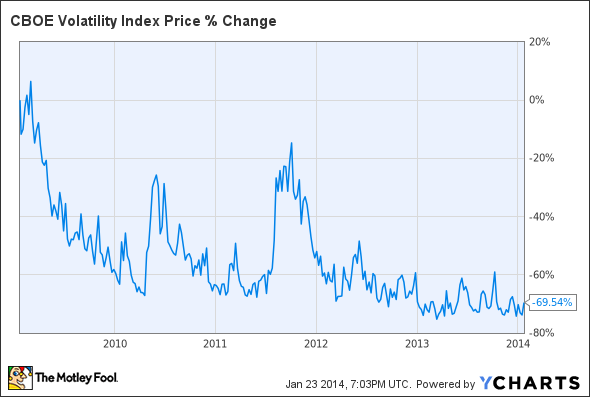 The HSBC/Markit's flash purchasing managers index showed Chinese manufacturing falling to a reading of 49.6 in January, diving nearly a full point below December's 50.5 mark and dipping under the neutral reading of 50 that marks neither expansion nor contraction in the manufacturing sector. Most worryingly, new export orders picked up losses in the month after already contracting in December. While many analysts and China observers have pointed out that the global economy's steady gains of late make today's misfire more of an anomaly than a long-term source of worry, investors should keep an eye on what the final reading for Chinese manufacturing in January shows at the end of the month.

While that's pushed investors to flee today, McDonald's isn't participating in the market dump. The stock's gained about 0.4% after the Golden Arches reported fourth-quarter earnings of $1.40 per share that topped analyst expectations by a penny. However, the fast-food giant's global same-store sales fell 1.2%, far below the 0.6% average analyst estimate.

A 3.8% drop in the U.S. alone comes while McDonald's tries to keep sales afloat as pushes for healthier eating choices grow in America. The company has tried new approaches with menu items such as wings and smoothies, but so far the challenges have outweighed the results. However, the company's performance in other major geographical markets hasn't impressed, either: McDonald's saw its Asia-Pacific, Middle East, and Africa sales fall 2.1%.

IBM, up 0.08%, is doing its part to keep the Dow from further losses today. The company's recent earnings results cast a dour look on its future, but IBM shook up the status quo today by selling its low-end server group to Chinese computer maker Lenovo. The $2.3 billion deal comes as IBM looks to maneuver away from hardware, a division that's smoked the company's revenue as of late: IBM's seen falling sales in the past seven consecutive quarters. Big Blue is still maintaining its high-end server division, but investors should applaud the company's pivot toward software and services as hardware continues to weigh on this lackluster Dow stock.