Nintendo announced on January 17th that it'd be slashing Wii U sales forecasts for the year. Here are three "crazy" ways Nintendo can save itself before its slide deepens.

How much has Nintendo been struggling since the Wii peaked in popularity? Well, a picture (or... chart) is worth a thousand words. 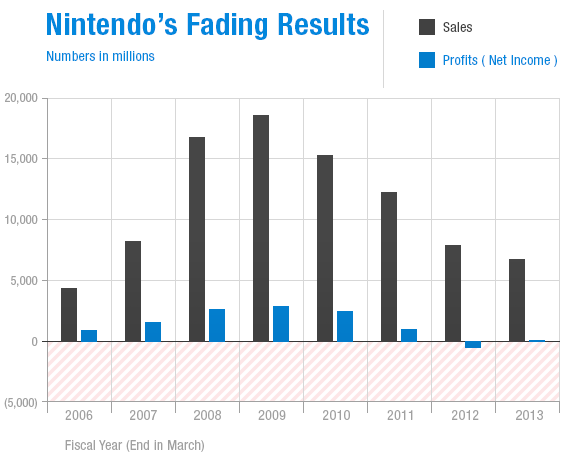 The most recent blow to the company came on January 17th when it announced shipments for the Wii U during its current fiscal year (April 2013 to March 2014) would come in at 2.8 million. That was down from the company's original forecast of 9 million.

Nintendo walking back expectations wasn't shocking. Between April and September of this year, the company shipped an astonishingly low 460,000 Wii U's over a six-month period. Everyone knew there was no way the company would come close to its target of 9 million systems shipped. However, Nintendo's January 17th announcement did verify suspicion that the Wii U's holiday season wasn't particularly strong.

The good news for Nintendo? It has over $10 billion in the bank, which is an impressive war chest. Yet, even with vast sums of money, technology companies can quickly fall behind and be forgotten. Microsoft (MSFT 1.70%) had a pretty mighty cash hoard of its own across the past decade as rivals in mobile blew by it.

For that reason, Nintendo needs to act decisively in a few key areas, or risk an astonishingly fast collapse from its golden age in 2009. Below, are three bold moves Nintendo should consider.

1.) Attack smartphone gaming by creating the "Netflix of Video Games."

Those opposed to Nintendo putting its games on smartphones liken the situation to picking up pennies in front of a bulldozer. App store sales charts have shifted toward games that are free and offer in-game purchases. Think FarmVille or Candy Crush. Games like Angry Birds that charge an up-front cost -- rarely of more than $10 -- have declined in popularity. Nintendo could put its past library, or even new Mario games on a smartphone, but the potential revenues would be minuscule relative to what it gets from selling mobile consoles. In addition, the company selling games on smartphones could depress sales of its still popular 3DS system.

One suggested alternative would be to think about mobile entirely differently than app stores. I recently put forth the case on how Nintendo could create a very successful Netflix-like video game subscription service.

If you want more details on the specific plan, the article can be read here. The simple idea is that streaming services can be more appealing than selling a la carte digital sales. Revenues collected by digital film services came in at $3.16 billion in the U.S. last year while sales of individual digital films were $1.19 billion.

Nintendo has exactly what Netflix has managed to build up, a deep catalogue of classic titles. Renting out its entire library at a fixed, monthly cost (excluding certain areas like recent systems, much like how Netflix's catalogue of newer films is lighter) could prove far more lucrative than selling individual titles. The best part is that advances in cloud-technology make such a service very feasible not only on mobile, but across other devices like television.

At the end of the day, a Nintendo streaming service could not only be a big revenue generator on its own, but also increase awareness of Nintendo games, providing a boost to newer systems.

2.) If sticking with new hardware, abandon the Wii U faster than expected.

Suggesting Nintendo abandon the Wii U already might seem like madness. After all, the system was just released in late 2012. However, sticking with the platform too long could leave Nintendo doomed to repeated its mistakes when it next releases a system.

A huge reason for the Wii U's failure is that it doesn't feature enough extremely popular first-party games. Sure, a full-fledged 3D Mario game hit the system with the release of Super Mario 3D World this holiday season. However, buyers of a Wii U are still waiting on new Mario Kart, Zelda, Metroid, Donkey Kong, and other major franchises to hit the system. Nintendo says the games are coming, with a new Donkey Kong slated for a February release and Mario Kart 8 slated for Spring.

There are reports that Nintendo has already begun prepping for its next-generation system. While you don't want to look too far into unconfirmed rumors, Nintendo's own comments do seem to indicate the company is conducting a rethink of its overall business strategy. Such soul-searching is likely caused by a realization the Wii U missed the mark. If reports are correct, that's a difficult, but necessary move on Nintendo's part.

If Nintendo is expecting to launch a next-generation console faster than expected, it'd be wise to shift developers on some of its best franchises toward the new system as fast as possible. The company has already lost third-party support from developers like EA with the Wii U. If Nintendo wants the chance to bring third-party developers back to its camp and have strong initial sales of a new system, the company needs to have a very strong slate of game releases near the system's launch. If that means most major franchises get only one (or zero) games released on the Wii U and game releases dry up after 2014? That's a tough pill to swallow for current Wii U owners, but it's the kind of difficult decision Nintendo needs to make if it wants to give its next system the best shot at succeeding possible.

3.) Do something really crazy.

I was at CES earlier this month, and the one product everyone was talking about was Oculus VR. The company is still small, with its last funding round at about $75 million. With the company's newest VR set winning a barrel of "best in show" awards, isn't that precisely the kind of "reinventing video games" product Nintendo would love to invest in? Nintendo should consider investing in some proven innovation outside its walls with just a fraction of its total cash.

Or, if Nintendo's situation continued to worsen, and it looked at leaving the home console market more seriously, why not strike a major deal? Between the launch of the Xbox and the first quarter of 2012, the financial units at Microsoft that contained its Xbox division lost a cumulative $4.1 billion. The red-ink around Xbox has largely turned black in recent years, but the bottom line is that Microsoft also has a lot of money, and is open to big-spending to win the war for the living room.

What if Nintendo signed an exclusive agreement with Microsoft to produce video games for Xbox, in exchange for a big payday? Microsoft would get an ultimate trump card over Sony. If the deal was structured properly, Nintendo could pour its payments from Microsoft back into its valuable mobile gaming console business as well, while moving past console gaming. If rumors surrounding Nintendo's next-generation "Fusion" gaming system are correct, the company might be moving in this direction anyway.

Would such a move ruffle feathers? Of course it would. Yet, the major point isn't that Nintendo would need to do that specific deal. Instead, it's that Nintendo has valuable enough franchises, and its name means enough that it could command some pretty incredible deals. If Nintendo were to enter smartphones, could it negotiate with Apple (AAPL 2.14%) to go exclusive to the iOS and get a default main screen link to a "Nintendo Hub?" Such an arrangement would keep Nintendo away from the cutthroat world of App Store best-seller lists. Also, two of the markets where iOS has its best market share -- Japan and America -- happen to be areas of strength for Nintendo.

Maybe Apple would never go for such a deal, or maybe it would see an exclusive pact with Nintendo as a fantastic way to stay differentiated from Android.

Either way, Nintendo's name still means enough it could dare to dream big. Those that compare Nintendo leaving hardware to Sega underestimate what a kingmaker Nintendo could play between Sony and Microsoft in the console wars, or even in something like smartphones. Sega never had the kind of leverage Nintendo possesses. The house of Mario would be wise to at least explore what kind of deals it could get.

Eric Bleeker, CFA has no position in any stocks mentioned. The Motley Fool recommends Apple and Netflix. The Motley Fool owns shares of Apple, Microsoft, and Netflix. Try any of our Foolish newsletter services free for 30 days. We Fools may not all hold the same opinions, but we all believe that considering a diverse range of insights makes us better investors. The Motley Fool has a disclosure policy.