If you're reading this article, then there's a good chance that you remember a time when, as a child, you would play with G.I. Joe figures, Transformers, Hot Wheels, Barbie, and/or plush toys. Imagine that someone asked you the following question back then: "What will toys be like twenty to thirty years from now?"

Your answer likely would have had a lot to do with technology and robotics. Those toys have made an impact on the toy industry, as you will soon see. Overall, and just like on Wall Street, the winners keep winning. In other words, many of the same toys, or at least the same brand names, are just as popular with kids today as they were when you were a kid.

Industry results
According to NPD Group, toy sales in 2013 slipped 1% in comparison with 2012. This isn't reason for panic, but it's not a number to get excited about, either. The common theory is that the shorter holiday shopping season had a lot to do with the subpar performance. This is a justifiable analysis considering Cyber Monday toy sales jumped by 23%, and Black Friday/Cyber Monday sales combined increased 12%.

However, these numbers still aren't overly impressive. A 4% increase is good, not great. While a 23% jump in Cyber Monday toy sales looks amazing, almost all Cyber Monday sales -- regardless of the product -- are up a lot year over year, simply because more people are shopping online than last year. However, there were winners.

Youth electronics was the strongest category in 2013, enjoying an 18% spike in sales. This was primarily thanks to kids' tablets and robotic toys such as Zoomer (interactive dog) and Flutterbye Fairies (wave your hand and a toy fairy floats, twirls, dances, and flies). Zoomer and Flutterbye Fairies are both sold by Spin Master, a private company.

Arts & crafts saw an 8% increase in sales, and plush toys grew at a 2% clip. Action figures slid 6%, and preschool toys pulled back 4%. But there were exceptions.

Disney aligns the stars
Licensed toys are 31% of industry sales, and the category grew at a 3% rate in 2013. Disney owned three of the top five fastest-growing toys in 2013, including Doc McStuffins, Sofia the First, and Disney Planes. Disney also owned two of the top five properties overall, including Disney Princess and Star Wars.

Star Wars toy sales in 2014 might do well, but the result will be nothing in comparison to 2015, when consumers get excited about the release of Star Wars Episode 7. No title for the movie has been revealed yet, but if you would like to take a shot at it, go for it in the comments section below. As far as 2016 goes, sales of Star Wars toys should go through the roof. Known characters will generate interest among young consumers, and the wise Disney will surely have new and cool characters to show off. Younger generations might like Yoda, Darth Vader, and Luke Skywalker, but they will now have new Star Wars characters to call their own. Let's not forget that there will be three new Star Wars installments, not just one.

Two of the other top five properties for 2013 were Barbie and Monster High, both of which are owned by Mattel (NASDAQ:MAT). The fifth property on the list was NERF, which is owned by Hasbro (NASDAQ:HAS).

If you're considering an investment in one of these three companies, then you might want to take a look at a top-line growth comparison for them over the past year: 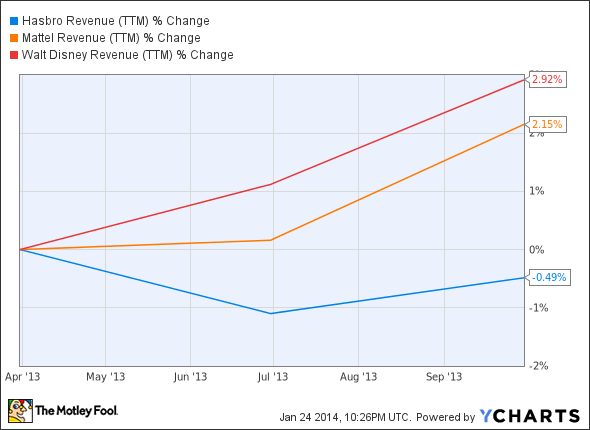 HAS Revenue (TTM) data by YCharts

Of course, Disney is also the most diversified, with theme parks, movies, television networks, and a cruise line. However, if you're looking for dividend payments, then it should be noted that Hasbro and Mattel currently yield 3.10% and 3.30%, respectively, whereas Disney yields just 1.10%.

The bottom line
The toy industry is ho-hum right now, but Disney is performing well despite current industry trends. More importantly, the upcoming release of Star Wars Episode 7 should drive toy sales at an unfathomable level. This, of course, is based on the movie resonating well with kids while also not upsetting loyal Star Wars fans of older generations. This will be tricky to accomplish, but if you look at Disney's track record for entertainment, no company has done better. Conclusively, a long-term investment in Disney should pay off, and future merchandising sales will play a role. Please do your own research prior to making any investment decisions.