Consumer spending in the U.S. rose in the month of November as compared to earlier months. It is obvious that consumers have started opening their wallets and welcomed the winter shopping season wholeheartedly. This should create ample opportunities for investors to strengthen their portfolio with interesting investments.

One of the most attractive companies is Michael Kors (NYSE:CPRI). It has been a wonderful performer, with a stock price appreciation of 58% over the last year. Despite operating in an industry such as luxury apparel and accessories, which customers tend to shun when cutting their spending, Michael Kors did a commendable job of attracting customers and expanding its business.

The outperformer
The luxury retailer has outperformed other players in the industry such as Ralph Lauren (NYSE:RL) and Coach (NYSE:TPR), as shown in the chart below: 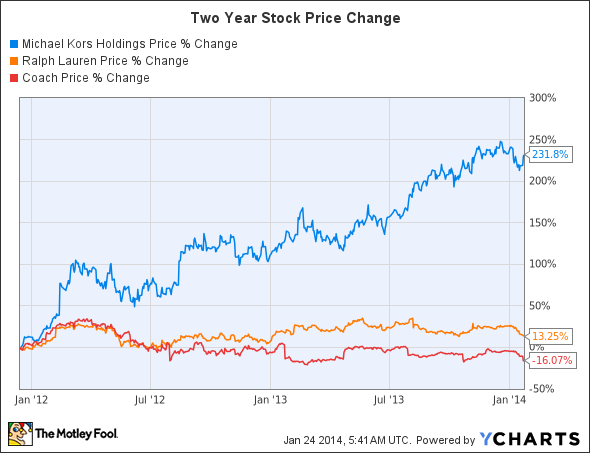 Clearly, Kors has been an exceptional performer. It has returned 231.8% to its investors over the last two years. This is way beyond that of Ralph Lauren and Coach, and is all thanks to Kors' growing sales during the period.

In fact, Kors' recent quarter was a blockbuster one with a revenue surge of 39%, clocking in $740.3 million and earnings growth of 45% to $0.71 per share over last year's quarter. Although it might seem to be the contribution from 83 new stores added during the year, it was also aided by same-store sales growth of 23%.  This is an important metric in the retail space since it eliminates the effects of any new store openings or closures during the period.

On the other hand, both Coach and Ralph Lauren are struggling to post positive same store sales. Although Ralph Lauren managed to meet analysts' estimates in its last quarter, its revenue increased slightly as same-store sales fell by 1%. This was mainly because of lower customer traffic and unfavorable currency movements.

Coach has also been unable to stir demand for its high-end products as customers are shifting to Kors for their needs. This led to a drop of 1% in its recent quarter's top line as well as a same-store sales decline of 6.8%. Hence, a drop of 4.4% in Coach's stock price is justified. Nonetheless, the company has been trying to improve its revenue by expanding its products and increasing its marketing .

Some numbers to consider
Kors' trailing P/E multiple, which stands at 33.6, is higher than that of both Coach (15.6) and Ralph Lauren (22.6). Kors looks expensive compared to the others, but its price is justified because of its great performance since it went public two years back. Moreover, the forward P/E multiples of Kors, Coach, and Ralph Lauren stand at 23.7, 14.7, and 18.0, respectively. The drop in forward P/E is the highest for Kors, which indicates that it is expected to earn more than its peers.

Additionally, the PEG ratio is 1.16 for Kors, 1.64 for Coach, and 2.12 for Ralph Lauren. Michael Kors' lowest PEG ratio indicates that it is expected to grow faster than its peers. Hence, despite being expensive, Kors seems to be the best pick among the three.

Conclusive thoughts
Michael Kors' products continue to resonate well with customers, which is driving its sales higher. In fact, sales at its existing stores jumped 20.4% for the month of December. Most importanly, it's the best company compared to the other players in the industry, and is expected to grow much more than them, making it a great investment.

Is This the Best Luxury Retailer That You Can Buy? @themotleyfool #stocks $CPRI $TPR $RL Next Article
Current