First things first, specialty coatings company RPM International (NYSE:RPM) is not a cheap stock. Its current P/E ratio is close to 28, but investing isn't really about where a stock has been. In the case of RPM, Foolish investors are looking at a stock with significant leverage to any upside to the U.S. commercial construction markets. Moreover, its restructuring activities, new product launches and geographic growth initiatives promise more growth in the future. It's not cheap, but if you buy a recovery in commercial construction, then you might want to buy RPM.

Paintings and coatings companies with large housing exposure like Valspar (NYSE:VAL) and Sherwin-Willliams (NYSE:SHW) outperformedin 2013 thanks to a recovering U.S. housing market. Meanwhile, a company with more of an industrial focus like PPG Industries (NYSE:PPG) also outperformed, partly due to its household paints products, and partly due to its convenient exposure to aerospace and automotive -- the standout areas in the industrial sector.

But why has RPM underperformed the sector? 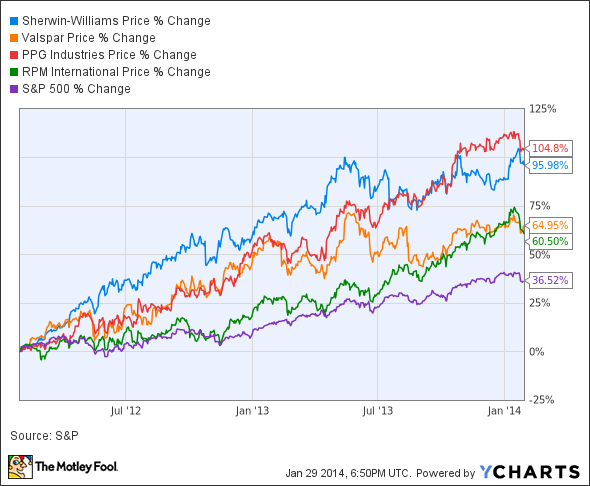 The answer is that RPM has much more exposure to commercial construction, and growth in the industry has been lackluster at best. For reference, RPM's consumer businesses only made up 35.6% of its sales in the first half; it's the industrial business that counts.

The simple idea behind buying RPM is that, historically speaking, the commercial construction sector (which its industrial business is focused on) tends to lag behind residential. And since the residential market started a recovery in 2013, then commercial should follow.

Unfortunately, this argument has been somewhat weakened by recent falls in the commercial/industrial index from the Architectural Billings Index. However, this is possibly due to the unseasonally bad weather; a similar effect can be seen in the dip in the Spring of 2013. 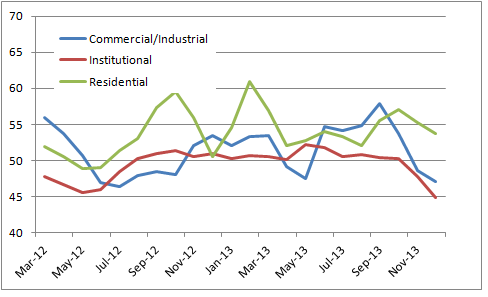 Ultimately, it only makes sense to buy RPM if you believe that the commercial construction market will be stronger in 2014. However, there are many other reasons to like the stock.

Why RPM is attractive
First, the company has demonstrated an impressive ability to expand margins in its consumer segment.  For example, earnings before interest and taxes, or EBIT, margins have expanded more than 360 basis points over the last three years. This is partly due to new product introductions and restructuring initiatives, but it's also due to a stronger housing market pushing up its consumer sales up over the last two years. In fact, consumer sales rose an impressive 11.2% in the last quarter.

Meanwhile, industrial margins have been lackluster. However, if commercial construction picks up then it's reasonable to expect its industrial margins to do so as well. And margin expansion plus revenue growth equals larger profits. 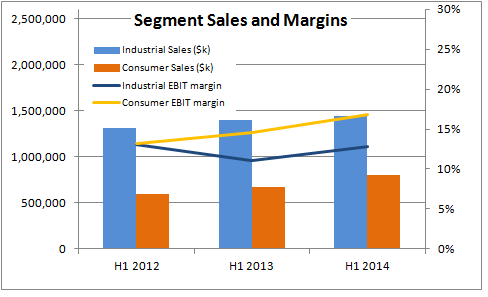 Second, RPM has also restructured its European operations and, according to management on the conference call, " modest increases in this fiscal year in revenues are resulting in strong bottom line leverage."

Third, in the commentary on the conference call, management gave a cautious outlook on U.S. commercial construction. When questioned on the matter in relation to its guidance for 2014, RPM's management answered:

In other words, any upside from the U.S. commercial construction market isn't baked into RPM's full-year EPS guidance of $2.05-$2.10. =

Fourth, significant investments are being made to expand its product reach in Latin America, and since RPM starts from a low base, it should generate growth by grabbing market share alone.

Why RPM is unattractive
The headline risk is obviously concerning the commercial construction market, and it should be noted that RPM's management did not make positive noises on the state of the current market.

In addition, the weather has been a factor for construction activity, and RPM may disappoint in its next quarter. Furthermore, its free cash flow is a bit of a concern. Excluding the effects of a contingency payment, operating cash flow fell to $83.3 million in the first half from $127.6 million in last year's first half. Around $18.1 million of the difference is due to spending more on inventory (to support faster growth), but CEO, Frank Sullivan was candid that he wasn't "satisfied" with RPM's working capital management.

The bottom line
As noted above, RPM isn't conventionally cheap (cyclicals rarely are just before their cycle is about to turn), and if commercial construction doesn't pick up then the stock is likely to suffer.

On the other hand, it has raised guidance twice already this fiscal year, and it's operationally leveraged to a market that could turn up in 2014. If you like its end markets, then this is a stock well worth watching in order to buy some in the current market sell-off.

Can This Company Catch up to Its Competitors? @themotleyfool #stocks $RPM $SHW $VAL $PPG Next Article
Current