Aratana Therapeutics recently announced conditional approval by the USDA of its lymphoma treatment for dogs, a big potential revenue driver.

Aratana Therapeutics (PETX), one of the best-performing biotech IPOs last year, rallied on January 28 after the company announced that the USDA had granted a conditional approval for AT-005, Aratana's T-cell lymphoma treatment for dogs. This is the second of Aratana's lymphoma canine treatments to be approved, following the conditional approval of the B-cell lymphoma drug AT-004 in 2012.

AT-005 is highly significant for Aratana, since it represents the company's first internal commercial opportunity. Its predecessor, AT-004, was licensed to Novartis Animal Health for commercialization in the United States and Canada. 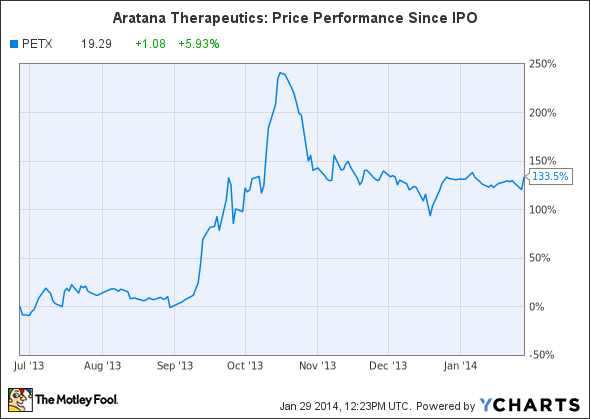 Is this recent bullish development a good reason to invest in Aratana, which has already rallied more than 130% since its market debut? Let's take a look at three key factors to consider.

1. An exclusive bet on pet health products
What makes Aratana an appealing investment is that there aren't many companies like it.

Other animal health companies, such as Zoetis, focus on both farm animals and companion animals. The same can be said of the other leaders in the field -- Novartis Animal Health, Merck (MRK -1.58%) Animal Health, Eli Lilly's Elanco, and Sanofi's (SNY -0.16%) Merial.

While those companies are affected by both pet and livestock issues, Aratana is a pure bet on the growing demand for veterinary pharmaceuticals. According to the company, annual spending by U.S. pet owners has surged 212% from $17 billion in 1994 to $53 billion in 2013.

Market trends reflect Aratana's forecasts. Last quarter, Zoetis, the largest pure animal health play on the market, reported that sales of its companion animal products rose across all four of its geographical regions. Sales were particularly strong in the U.S. and in Canada/Latin America, where revenue respectively rose 10% and 19% from the prior-year quarter.

However, when we compare Zoetis to Sanofi, Merck, and Lilly's animal health units, we see some glaring discrepancies:

Sanofi and Merck's negative growth shouldn't worry Aratana investors, however. Sanofi posted negative sales growth due to generic competition for its Frontline flea and tick control treatment -- a market that Aratana is not involved in. Meanwhile, Merck's animal health segment stumbled after its non-hormone growth promoter Zilmax was banned by major customers after it was found to cause lameness in cattle. Again, Aratana is not exposed at all to the livestock market, which makes it a more attractive, higher growth animal health play than any of the above companies.

2. An attractive pipeline of better treatments
Last December, Aratana announced that it had met all of its 2013 milestone developments. Here were the key highlights:

AT-001 and AT-003 could represent substantial improvements over the broad spectrum of NSAIDs (non-steroidal anti-inflammatory drugs) which are currently used to treat pain and inflammation in dogs.

AT-002 could compare favorably to the current treatments for inappetance, which surprisingly include human allergy drugs like Johnson & Johnson's Benadryl (diphenhydramine) or cyproheptadine. In addition, AT-001, AT-002, and AT-003 are all being tested for cats as well.

Meanwhile, both AT-004 and AT-005, which Aratana gained via its $30 million acquisition of Vet Therapeutics in October, have huge market potential, since lymphoma is the most common blood cancer in dogs and accounts for roughly 6% of all canine cancers. The most common treatment today is chemotherapy, which can cost between $3,500 to $10,000 per dog. Therefore, AT-004 and AT-005, which are both monoclonal antibodies, have game-changing potential as two of the first targeted treatments for dog lymphoma. Aratana expects a full approval license for AT-005 in 2015, make the drug Aratana's first pillar of real revenue growth.

Earlier this month, Aratana also acquired Okapi Sciences for its rich portfolio of feline antiviral and immunodeficiency drugs, and oncology drugs for both cats and dogs. If Okapi's lead drug candidate, a treatment for ocular disease caused by feline herpes, is approved, Aratana intends to commercialize the product in several territories under a current commercialization agreement with Novartis Animal Health.

3. A proposed public offering could mean lower prices ahead
Although Aratana has a robust pipeline, it finished last quarter with only $52.3 million in cash and equivalents. Meanwhile, it has a negative operating cash flow over the past 12 months of $13.8 million, $4.9 million in debt, and no meaningful sources of revenue.

Therefore, to fund upcoming studies, Aratana proposed a public offering of 6.5 million shares of common stock, priced at $19.00, on January 29. Aratana will sell 5 million shares, and two other major stockholders will sell 1.5 million shares. Considering that there are only 23.8 million outstanding shares on the market, that new offering will significantly dilute existing shares.

The company intends to raise $95 million from the sale, which will help cover its acquisitions of Vet Therapeutics and Okapi Sciences and upcoming trials. However, this means that lower prices could be on the horizon, which could be the ideal time for new investors to pick up some shares.

The Foolish takeaway
In closing, Aratana is a speculative, pre-revenue biotech company fully dedicated to the growing market for veterinary therapeutics. Aratana's robust pipeline and ambitious inorganic growth all indicate there is plenty of room for growth, but investors should remember that until the company actually generates revenue, no one can be sure what the stock is really worth. Aratana has had a spectacular triple-digit run over the past 12 months, and a new public offering is right around the corner, so lower prices could be ahead. Therefore, this is definitely a stock better suited for investors who can stomach the near-term volatility.

Why Aratana Therapeutics Is Tumbling Today