The solar industry seems to be immune to emerging market fear.

Swirling around the media, talk of a correction has many investors spooked. As of this writing, the Dow Jones Industrial Average is down about 6% from the 16,588.20 high that it reached at the end of December; the S&P 500 is down about 4% from its highs.

Although Foolish investors with long-term focus shouldn't be concerned, the uncertainty regarding the emerging markets and how it affects one's investments should certainly be considered. Nonetheless, one sector that continues to profit from the emerging markets is the solar sector.

It's always sunny in South Africa
Looking to secure over 17,000 MWs of solar power by 2030, South Africa is clearly committed to renewable energy. Abengoa Solar, headquartered in Seville, Spain, is developing two concentrating solar power, or CSP, plants in South Africa. Khi Solar One and Kaxu Solar One represent a combined 150 MW of solar power that will be incorporated into South Africa's grid. This is just part of the $5.4 billion that South Africa's Department of Energy has allotted for solar power development, with the goal of bringing 1.4 GW of wind, solar, and geothermal power online by 2016.

U.S.-based companies also recognize the value in South African solar investments. Google contributed $12 million for an equity stake in a consortium of investors that is providing $260 million in financing for the 96 MW Jasper Power Project. Looking to begin construction in the second half of 2014, Total S.A. and affiliate SunPower (SPWR -4.64%) will be developing an 86 MW project in the province of the Northern Cape. The ground-mounted solar system will use SunPower's Oasis Power Blocks System, high-efficiency panels, and single axis trackers. SunPower will provide engineering, procurement, construction services and long-term operation and maintenance for the project.

In other southern news
One country renewable energy companies are paying particularly close attention to is Chile. According to a report released in June of last year, the country's Environmental Evaluation Service (SEA) has already approved 4 GW of new projects with 2.2 GW under review. Taking advantage of this concerted effort to develop solar projects is SunPower. Building a 70 MW solar power plant in the Atacama desert, SunPower's majority shareholder, Total, will own 20% of the project by means of a long-term fixed price operation and maintenance agreement.

Another company operating in Chile is SunEdison (SUNEQ). Construction is about to begin on SunEdison's 92 MW Gramadal PV power plant project, which is expected to be completed by the end of Q1 2014. Also expected to be completed in the first quarter is the 51 MW project, San Andres, located in the Atacama desert. Is SunEdison only looking at Chile for exposure to emerging markets? Not at all. Looking back at the Q3 2013 earnings release (Q4 is due out next week), the company noted that with construction activity up over nearly 180% quarter over quarter, 30% is comprised of projects in emerging markets.

Additional opportunity
Although the country is not currently heavily vested in solar power (about 2,000 MWs installed), India is making a big push toward having solar account for a larger parts of its energy needs. The country is currently working on converting 20,000 acres of arid land to one of the largest utility-scale solar power plants in the world. The government is attempting to build a facility capable of producing 4,000 MW of electricity. Constructed in phases over the next seven years at a cost of over $1.1 billion, the solar farm would dwarf what are currently the largest solar farms in the world.

Recently announcing that it would be supplying Delhi International Airport in India with a 2 MW solution, Canadian Solar (CSIQ -6.32%) recognizes the value in the emerging markets. Last April, the company supplied a Chilean project with over 1,200 of its PV modules. During its last earnings conference call, management specifically mentioned the important role which emerging markets will play, "Our focus going forward is to continue executing the key elements of our strategy. That is, to grow and expand our module business by entering new emerging markets" Recent stock performance suggests that investors also recognize the value and importance in operating in various worldwide markets. When solar stocks suffered from news that Chinese PV demand would slow down in 2014, Canadian Solar seemed immune. 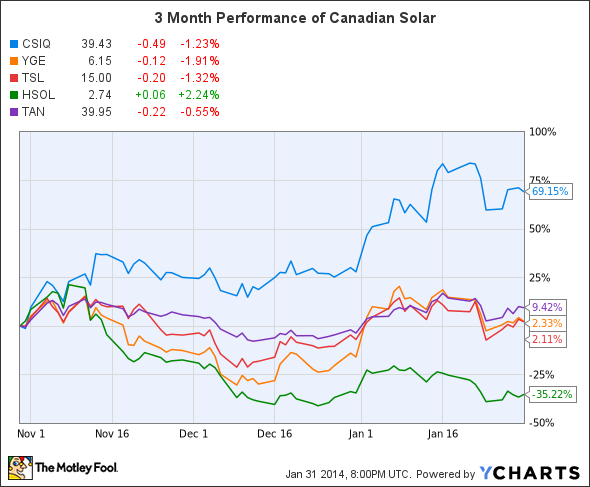 The Foolish conclusion...
Those interested in solar may benefit from Buffett's famous advice, "Be greedy when others are fearful." Though investors may look to exercise caution in considering emerging markets, they must remember that where there may be weakness, there may also be opportunity.