Only four of the 30 Dow Jones stocks delivered positive returns in January. Here's how they did it.

January was a brutal month on the Dow Jones Industrial Average (^DJI 0.10%) The blue-chip index lost 878 points, or 5.3%. Three member stocks dropped more than 10% last month, all of them tripped up by weak earnings reports.

But it wasn't all bad news for Dow stocks. Four of the 30 member tickers managed to trade higher over the month. This is the story of those four renegade risers in a sea of sinking returns. 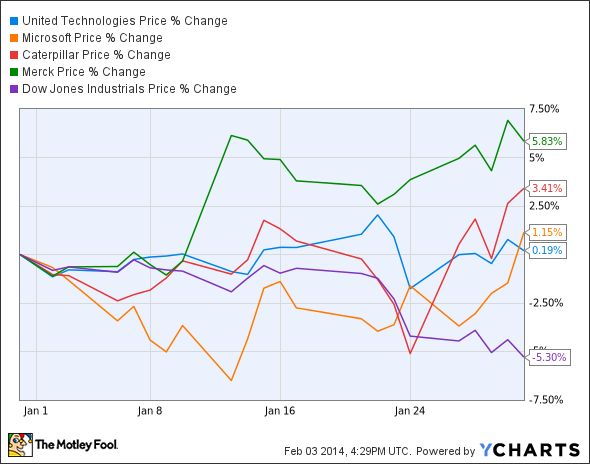 United Technologies (RTX 1.52%) just barely scraped out a positive January return, ending the month 0.2% higher. The industrial parts manufacturer beat earnings estimates at midmonth to spark a small share price surge, but lost it all on rumors of the Sikorsky helicopter division being on United's trading block. All told, United Technologies ended up being nearly dead money in January -- which made the stock a top performer in that miserable month.

Up next, Microsoft (MSFT 0.13%) struggled through most of January, at one point dipping more than 6% lower. But Redmond's fourth-quarter results turned out to be a pleasant surprise. The stock got another boost right at the end of the month on reports that the board may have settled on the third CEO in Microsoft's history. A 1.2% one-month gain may not exactly quicken the pulse, but it's still a welcome break from the market's negative trend.

And now we're getting into more substantial gains. Caterpillar (CAT 0.19%) had its ups and downs but delivered where it counted. Shares bounced back from pre-earnings pessimism with a 7% surge in two days, crushing Wall Street's estimates thanks to a phenomenally successful cost-cutting program. Caterpillar ended January 3.4% higher. Deliver that kind of monthly returns for a year and you'll end up with a 49% surge, so this is a big one.

But not as big as Merck (MRK 0.22%) and its 5.8% January gain. Do that for a full year and the stock would double. The medical giant entered into a partnership to research cancer diagnostics instruments, reported good results in an FDA review of blood-clot medication trials, and was upgraded by a prestigious analyst firm. Nope, no earnings-related boost for Merck, which reports fourth-quarter results this Wednesday. But this stock was the top performer on the Dow in January, even without any earnings-based catalysts.

Anders Bylund has no position in any stocks mentioned. The Motley Fool owns shares of Microsoft.