The Dow Jones today is little changed after a weaker than expected jobs report. 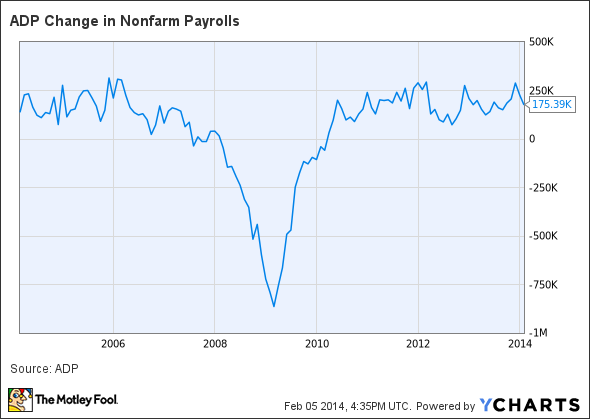 The private sector jobs report gives economists an advance idea of how the government's main jobs report will turn out. Analysts expect the Labor Department on Friday to report that the public and private sectors added 190,000 jobs in January, after only adding 74,000 jobs in December. December's weak report was attributed to bad weather affecting jobs and reporting. 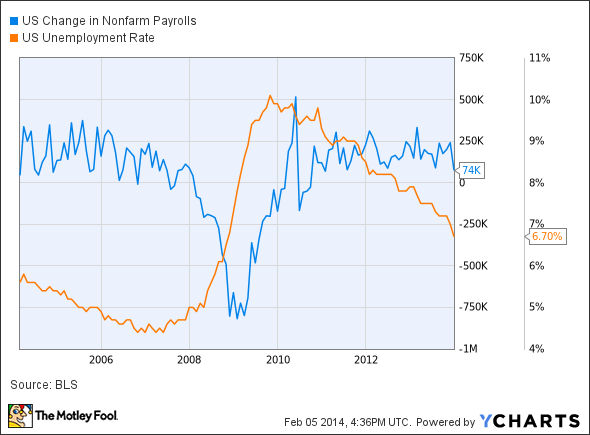 We will have to wait and see what happens on Friday. Unless the January jobs report is also terrible, which seems unlikely, the basic story of the past few years remains unchanged. The economy continues to add roughly 180,000-200,000 jobs a month, which combined with baby boomers retiring is lowering the unemployment rate faster than many expected. More people with jobs and a lower unemployment rate is good for the economy. The flip side of this is that it may be bad for the market.

The Federal Reserve has been surprised by how fast unemployment has fallen. As such the Fed taper of its economic stimulus has started with unemployment near its target of below 6.5%. With the central bank purchasing fewer long-term assets each month, I expect rates to stay above last year's level and profit growth to be challenged.

Foolish takeaway
So what can an investor do in times like this? It's hard to stay sober while everyone around you is drunk on Fed-stimulus punch, telling you to join in on the fun. My advice: Keep learning, focus on your goals, have an investing plan for the long term, stick to it, and ignore the crowds.