Satya Nadella faces a number of challenges as he takes over as Microsoft's CEO, but his biggest may be convincing customers to adopt Windows 8.

Newly named Microsoft (MSFT -0.80%) CEO Satya Nadella faces a lot of challenges, but the biggest may be getting customers to adopt the Windows 8 operating system.

According to NetMarketShare, which tracks operating system usage, Microsoft closed 2013 with 90.7% of the desktop/laptop OS market – handily leading Apple's (AAPL -0.34%) 7.5%. But adoption of the latest Windows has been much slower than it was for Windows 7. Of course, Windows 7 followed the largely disliked Vista, which likely sped adoption, but as the chart below shows, Windows 7 reached 10% market share in 10 months. Windows 8, which was a major redesign of the OS, took 15 months to reach that milestone. 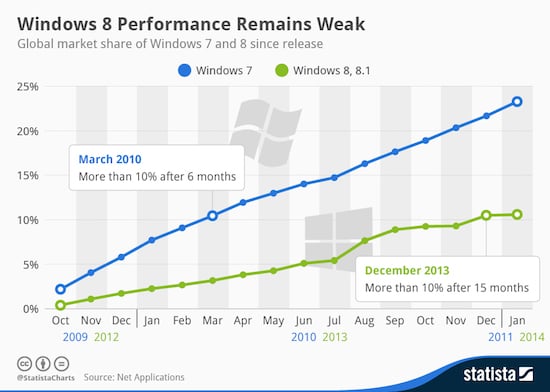 Windows 8 changed Microsoft's traditional operating system to one that more closely resembled Apple's iOS, which powers the iPhone and iPad, and Google's (GOOGL -0.94%) Android, which is also for mobile devices. Windows 8 dropped the look and feel that had been in place since Windows XP was released in 2001 and replaced it with an icon-based interface.

Windows 8 does have an alternate start screen that looks more like traditional Windows, but the mainstay start button was entirely removed in the initial release. That button was sort of restored in October's Windows 8.1 update, but the new version only brought users to the new graphic interface, not the old file menu.

And though it was not entirely pushed that way at launch, Windows 8 represented Microsoft's attempt to have the same operating system across desktop, laptop, and mobile (including tablets and phones) platforms).

What is it worth to Microsoft?

Windows is no longer the main revenue driver for Microsoft. The Office division is the most profitable for the company and the Server/Tools division brought in more revenue (but made less money), according to the company's 2013 financial reports, which showed an overall $26 billion profit. But while the numbers may not be as big as they once were, the Windows division still brought in over $19 billion in 2013, producing a profit of over $9 billion. Office may have done better at over $16 billion in profit on nearly $25 billion in revenue. Entertainment makes a small profit and Online Services lost money.

However, since Office and Servers/Tools are Windows-based, if Microsoft does not keep customers in the Windows universe, sales will fall correspondingly in the other divisions.

Why has it not worked?

Whereas Apple has always been an innovator and real tech geeks may experiment with alternate operating systems like Linux, Windows has always been the steady player used in the business world. Microsoft may have innovated under the hood, but the company slowly evolved its interface, keeping things familiar for the millions that used the system for work purposes. There were, of course, changes from Windows XP to Windows Vista to Windows 7, but those alterations were subtle -- not massive overhauls to the system.

And though the perceived botched launch of Windows 8 likely forced former-CEO Steve Ballmer from his job, the much-criticized executive should be lauded for seeing the need for change. Microsoft may dominate the OS market for traditional PCs, but traditional PCS are rapidly fading in popularity.

"Although PC shipments continued to decline in the worldwide market in the fourth quarter, we increasingly believe markets, such as the U.S., have bottomed out as the adjustment to the installed base slows," said Mikako Kitagawa, principal analyst at Gartner. "Strong growth in tablets continued to negatively impact PC growth in emerging markets. In emerging markets, the first connected device for consumers is most likely a smartphone, and their first computing device is a tablet. As a result, the adoption of PCs in emerging markets will be slower as consumers skip PCs for tablets."

So, while Ballmer might not have handled the Windows 8 launch perfectly, had he not developed the product and simply stuck to slowly evolving Windows, Microsoft would be left without an answer for the exploding mobile and tablet markets.

Microsoft has around $84 billion in cash and marketable securities, so the company can afford to play a long game. Windows 8 numbers have been creeping up (albeit slowly) for PCs and the Surface tablet jumped from .4% market share in the United States and Canada in December 2012 to 2.3% in December 2013. Windows 8 Phone, which had been steadily climbing, dipped from 3.3% market share in September 2013 to 3.1%, according to Comscore, which is a troubling development for Nadella.

Still, with PC sales dismal but stabilizing, Nadella has the money and time to attempt to convince his customer base – still 90.7% of the PC market – to stay in the family. If he can do that, while building mobile share with Surface and putting Windows 8 phones back on a growth path, the new CEO cand be perceived as a success whereas the same results from Ballmer would likely have been perceived as a failure.