The problems leading up to this year's Winter Olympics are nothing short of biblical. Do they spell trouble for the corporate sponsors involved?

The week leading up to this year's Winter Olympics might be the most controversial in history. The first wave of reporters is now in Sochi, and complaints range from undrinkable water to wandering packs of wild dogs. Public sentiment has gotten so bad, the term "#SochiProblems" has been trending on Twitter.

In addition to being the most expensive Olympics ever, corporate sponsors have millions of dollars invested. Does the negative publicity hurt?

The benefits of sponsorship
According to IEG Consulting, the Olympics' 10 Tier One partners -- which include Coca-Cola (KO 0.88%), McDonald's (MCD), and Procter & Gamble (PG 0.91%) -- dole out an average of almost $20 million annually to be a part of the Games. Most contracts last at least a decade, and some are as long as 20 years. 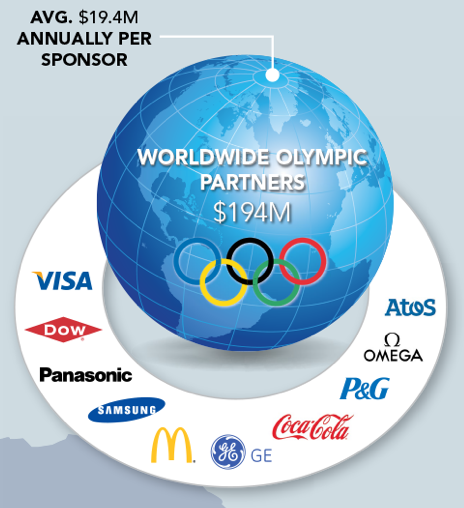 As you'd guess, the benefits of sponsoring a global event that can reach over a billion viewers are significant. Research from Havas Sports & Entertainment suggests that in the London 2012 Olympics, consumers were 50% more likely to associate a sponsor with words like "inspiring" and "trustworthy" than before, and those polled were 25% more likely to think of a partnering brand as "admired" or "world-class."

Procter & Gamble is one of the few to place a dollar value on this benefit. The consumer goods company says sales in Olympic quarters are close to $100 million above normal levels -- a profit margin of about 150%, assuming it spends $20 million a year.

But that's not the entire picture.

The long-term outlook
I spoke with Jim Andrews, a senior VP at IEG (whose consulting clients include P&G and Samsung) about how sponsors are tackling this year's Games. He stressed that the companies are focused on the long-term benefits of partnering with the event, despite the potential negative press associated with Sochi, and that "as a sponsor, they know the risks and rewards that go into being part of the Olympic family."

For most, the reward outweighs the risk because of the benefits described above. Coca-Cola, for example, has been involved since 1928 and plans to remain a sponsor until at least 2020, while P&G is in the middle of a 10-year deal that stretches through next decade.

Depending on the year, however, there will be Olympic destinations that aren't ideal. For every London or Rome, there's bound to be a Sochi every few cycles. As Andrews explained to me, "if they had been making the choice, I'm not sure any of the sponsors would've chosen Sochi, but it's not up to them, it's up to the IOC. They have to live with the decisions made for them."

Perhaps this is why early data from the consulting firm suggests Olympic partners are doing less promotion than usual.

Andrews says IEG isn't "seeing the level of activity [it] normally sees around other Games," and with such a long time horizon in play for most, it's reasonable that a company like Coca-Cola or P&G could simply cut back on marketing during years of elevated controversy.

The risks that remain
With that being said, it's impossible to account for all of the potential problems that could occur during an Olympics. In Sochi, for example, most companies likely understood that an area facing over $50 billion in development costs could face problems. As The Washington Post reported this week, infrastructure shortcomings include everything from unfinished construction to uncovered sewer entrances.

More seriously, the U.S. State Department has already issued a travel alert for Sochi, and a recent CNN poll indicates nearly 60% of Americans "think a terrorist attack on the Games is likely." As of late January, 30% of tickets remained unsold.

From a sponsorship standpoint, Bryan Cave's Steve Smith told me that most partners "traveled to Sochi in advance ... so they knew there were issues," but pointed out, "you never really know just how difficult things are until you actually get there."

Smith, who has advised Olympic sponsorships in the past, also said there isn't a "rule of thumb" to quantify just how badly a brand can be affected by negative press at the Games, but some sponsors could be protected by their contracts:

Most likely, a sponsor will have some sort of remedy in the agreement for certain breaches of the agreement or failure of Sochi to deliver on certain promises. However, it's very hard to anticipate every contingency, so I suspect there will be some battles over what relief a sponsor should receive because of what happens in Russia.

Many times, sponsors entertain clients at events like the Olympics, so it's possible that a poor transportation or lodging experience could lead to monetary compensation.

The future
As of now, the sponsors I've talked to say their marketing plans haven't been changed by Sochi's negative press, and it makes sense. All budgets were likely finalized months before the Games, and as IEG reveals, they're spending less than usual on marketing.

The Olympics' biggest partners shell out $20 million a year, and like Coca-Cola or P&G, they're in it for the long haul, Sochi issues be damned. Because sponsorship generally leads to improved perceptions among consumers, this viewpoint is understandable, and assuming sponsors planned ahead, most probably aren't losing sleep over "#SochiProblems."

But it's likely they're looking forward to the discussion turning from Sochi's lack of preparedness, unsafe venues, terrorism threats, and packs of roving stray dogs to the athletic achievement and grandeur of the Games.

Jake Mann has no position in any stocks mentioned. The Motley Fool recommends Coca-Cola, McDonald's, and Procter & Gamble. The Motley Fool owns shares of Coca-Cola and McDonald's. We Fools may not all hold the same opinions, but we all believe that considering a diverse range of insights makes us better investors. The Motley Fool has a disclosure policy.

Stock Market Power Rankings: Down Is the New Up

Can McDonald's Corporation's Turn Its Fortunes Around?