The Dow Jones is up by triple-digits today as Disney beat earnings expectations and some economic reports came in better than expected.

Disney has been pursuing a strategy of building franchises around movies. As part of this strategy it has acquired Marvel Entertainment and Pixar, which continue to pay off in both organizational talent and a stable of well-liked characters and stories. The other strong point was Disney's cable channels, where net income grew 34% to $1.28 billion, led by ESPN. ABC was a weak point, however, with a 32% drop in net income to $178 million.

While Disney's stock jump is on top for the day, 25 of 30 Dow stocks are in the green on good news from three U.S. economic releases.

The latter reports indicate together that while fourth-quarter GDP may be revised lower to roughly 3% growth from 3.2%, it does not appear we will see a drastic reduction that some feared. 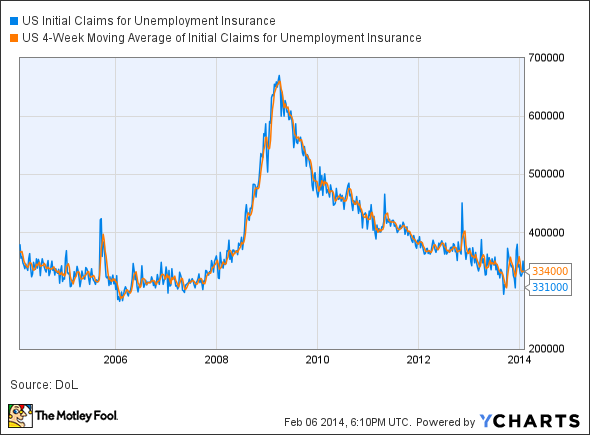 The basic story behind the jobs and unemployment numbers remains the same: the economy continues to add roughly 200,000 jobs a month and new unemployment claims are slowly trending lower. We have to wait till tomorrow for January's nonfarm payrolls report from the government, but I don't expect there to be a meaningful surprise in either direction there.

What's an investor to do?
In any event, your investment strategy shouldn't be dependent on a few economic reports. Constantly educate yourself, find great companies, and invest for the long term.

Dan Dzombak can be found on Twitter @DanDzombak or on his Facebook page, DanDzombak. He has no position in any stocks mentioned. The Motley Fool recommends Walt Disney. The Motley Fool owns shares of Walt Disney. Try any of our Foolish newsletter services free for 30 days. We Fools may not all hold the same opinions, but we all believe that considering a diverse range of insights makes us better investors. The Motley Fool has a disclosure policy.

Michael Burry Sells Everything Except This One Stock