Just as expected, Walt Disney moved the Dow like nobody else on the release of first-quarter results.

Disney yesterday reported stellar numbers in the first quarter of the 2014 fiscal year, with the studio entertainment segment reporting a 75% year-over-year boost in operating profit. Surprise hit Frozen now looks like a likely franchise starter, and Thor: The Dark World proved that even the lesser names in the Marvel universe can swing a big hammer at the box office. 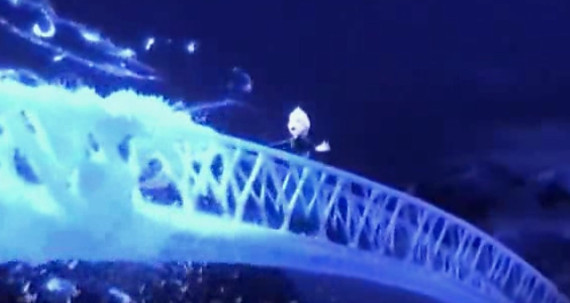 Disney is ready to scale new heights, thanks to creative victories like Frozen. Image source: Official sing-along video for Frozen.

"We're obviously proud of our performance this quarter, and it's very satisfying to see long-term strategies come to fruition, delivering results and driving greater value for our company and shareholders," said CEO Bob Iger on last night's conference call.

Disney investors took those words to heart, driving share prices 5.3% higher by late morning. That translated into 25 Dow points, just from Disney. Needless to say, no other Dow stock comes close to these gains today.

I'm a happy Disney shareholder today, because I see the company navigating the tricky consumer waters with an expert hand. Giving the Pixar crew a controlling say-so over other animated Disney films was exactly the right decision, taking full advantage of the creative talents on hand. The Marvel and Lucasfilm brands will have the boy side of the young movie market locked up for years to come, so it makes perfect sense to launch another princess on the animated side.

And if you think I'm talking too much about Disney's movies, forgetting about the sprawling conglomerate that grew around that core, make no mistake -- this is where it all starts.

Without high-quality movies, Disney doesn't have a brand to hang its hat on. Every hit movie leads to more theme park attractions, themed cruise vacations, Disney-branded video games, and lunch boxes -- and the beat goes on. If Disney ever loses its silver screen magic, the company is doomed in the long run.

But right now, the Walt Disney machine is making all the right moves. One megahit like Frozen makes up for scores of failures like John Carter and Lone Ranger. I expect to own Disney shares for decades to come, as long as the company stays committed to its creative core.