"House of Cards" returns for a second season, and you can stream it all on Valentine's Day.

House of Cards returns for a second season on Valentine's Day. Political backstabbing isn't as romantic as a dozen flowers or a box of chocolates, but it's not a stretch to picture many couples capping off a nice meal come Friday with a little Kevin Spacey and Robin Wright plotting to rise up the ranks of hungry politicos. They'll catch the first episode of the second season. When it's over they are welcome to stream another -- and another. House of Cards is a deck to be shuffled at everyone's own pace.

Netflix (NFLX 1.64%) is the champion of binge-viewing. Unlike traditional networks that offer shows in weekly installments, Netflix offers entire seasons of its original programming on the same day. It's been this way since Netflix got into this game two years ago this month with Lilyhammer. It was a gutsy strategy. Instead of building up momentum for the serialized drama about a mobster sent to Norway as part of the witness protection program, Netflix chose to let everyone watch it at their own pace. There would be no Twitter eruptions at the same time every week. There would be no water cooler buzz since everyone would be at a different point in the series.

However, the approach certainly differentiated Netflix from the conventional programming mind-set. Netflix has gone on to stick to this "binge viewing" approach in all but one of its subsequent offerings. The only time it strayed was back in December. DreamWorks Animation's (DWA) Turbo FAST -- an animated series based on the studio's Turbo about a speedy snail on the racing circuit -- made its debut with only the first five installments. That wasn't intentional. Netflix just went with the episodes that were ready.

The rest of the streaming industry doesn't seem to agree. Amazon.com (AMZN 0.11%) offered its first shows in November, choosing to make just three episodes of Alpha House and Betas available at the launch. New episodes would follow on a weekly basis. When Hulu rolls out Farmed and Dangerous later this month, the four episodes will be unveiled across four consecutive Mondays.

Netflix may have a right idea with how it's making all of House of Cards available on Valentine's Day, but the rest of the industry apparently either isn't buying into binge viewer or just doesn't feel that it's financially feasible for their particular models. 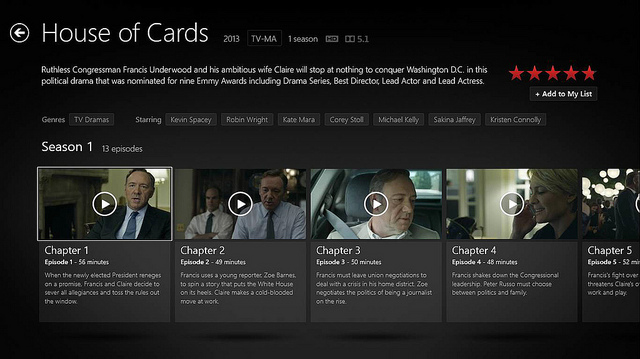 Rick Munarriz owns shares of Netflix. The Motley Fool recommends Amazon.com, Apple, DreamWorks Animation, Google, and Netflix and owns shares of Amazon.com, Apple, Google, and Netflix. Try any of our Foolish newsletter services free for 30 days. We Fools don't all hold the same opinions, but we all believe that considering a diverse range of insights makes us better investors. The Motley Fool has a disclosure policy.