Let's see what the numbers say about United Technologies (UTX).

Investors love stocks that consistently beat the Street without getting ahead of their fundamentals and risking a meltdown. The best stocks offer sustainable market-beating gains, with robust and improving financial metrics that support strong price growth. Does United Technologies Corporation (RTX 1.52%) fit the bill? Let's look at what its recent results tell us about its potential for future gains.

What we're looking for
The graphs you're about to see tell United Technologies' story, and we'll be grading the quality of that story in several ways:

What the numbers tell you
Now, let's look at United Technologies' key statistics: 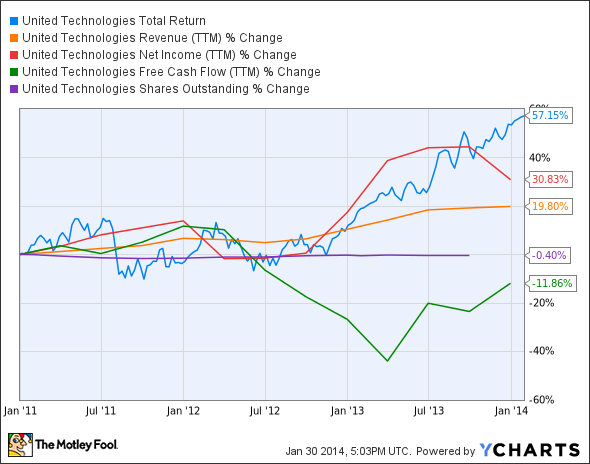 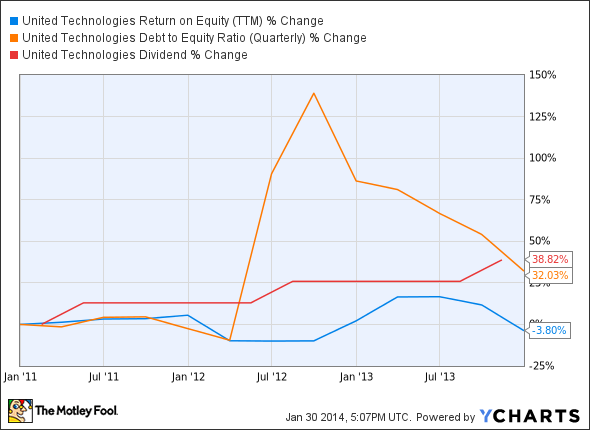 How we got here and where we're going
United Technologies puts together a passable performance by picking up four out of nine possible passing grades. United Technologies' revenue has been growing quite steadily, but the company's free cash flow started to diverge from its net income over the past few quarters. Moreover, United Tech's stock growth has been outpacing the growth of its bottom line, which could be a sign of unsustainable valuations. How might this diversified manufacturer fuel greater revenue growth and reverse the decline in its free cash flow? Let's dig a little deeper to find out.

United Tech recently posted market-topping revenue and earnings -- which are up 9% and 16% respectively -- as compared to 2012's results. United Tech's management noted that the company sports a strong pipeline of commercial orders for the upcoming year, and it expects to invest almost $4 billion in capital expenditures, acquisitions, and share repurchases this year. However, United Technologies has been plagued by persistent problems with Boeing's (BA 4.03%) 787 Dreamliner aircraft, for which it supplies important components, as well as underwhelming ongoing economic conditions in Europe coupled with falling demand from military customers.

The company should benefit from its underlying competitive advantage in aerospace and building systems business as both air travel and urbanization continue to grow in sync with each other. With its acquisition of Goodrich, United Technologies is expected to save around $500 million from cost synergies by 2016, which will boost earnings by the tune of $250 million per year.

United Technologies stumbled last week due to rumors of a spinoff of its Sikorsky helicopter division, which has become the focal point of a heated debate among shareholders. Fool contributor Rich Smith points out that Sikorsky would be valued at just one time its annual sales, whereas United Tech's shares currently trade at 1.65 times sales. Sikorsky also continues to benefit from increased Department of Defense spending -- the segment recently won a $724 million contract to provide 57 Black Hawk helicopters by June 2015. United Tech also bagged a $549.9 million contract to deliver 37 Sikorsky Seahawk helicopters to the U.S. Navy.

Other United Tech divisions also continue to earn big contracts, including one $167 million award for operational and maintenance support on F135 engines for Lockheed Martin's F-35 stealth fighter jets through December 2016. Rich Smith notes that United Technologies has several government defense projects in other countries as well, including a $183 million contract to set up and install ground stations for the Royal Saudi Air Force, and a $4.7 billion contract with Canada to deliver 28 Cyclone Maritime helicopters built by both Sikorsky and General Dynamics.

Putting the pieces together
Today, United Technologies has some of the qualities that make up a great stock, but no stock is truly perfect. Digging deeper can help you uncover the answers you need to make a great buy -- or to stay away from a stock that's going nowhere.

Alex Planes has no position in any stocks mentioned. The Motley Fool owns shares of General Dynamics and Lockheed Martin. We Fools don't all hold the same opinions, but we all believe that considering a diverse range of insights makes us better investors. The Motley Fool has a disclosure policy.