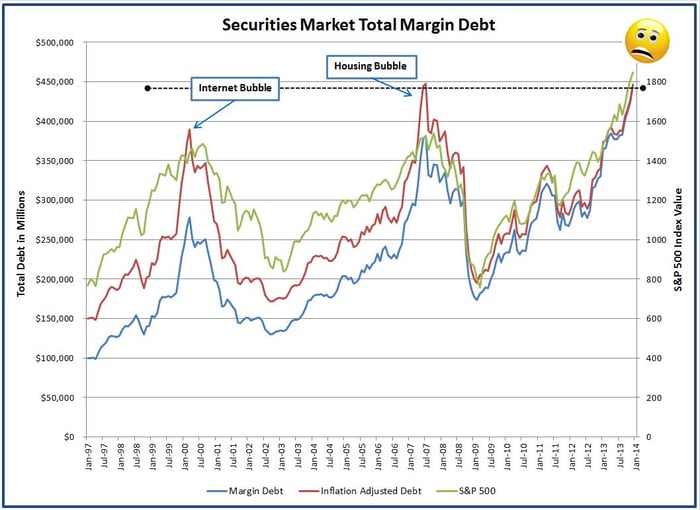 Borrowed money in the stock market, known as "margin debt," hit an all-time high of $444.9 billion in December, which was an increase of 5% over the previous month. This puts margin debt, adjusted for inflation, extremely close to the levels seen during the housing bubble and above highs set during the dot-com bubble. To put that into perspective, if this margin debt were a country's GDP, it would be the 30th-largest economy in the world, right below Taiwan's.

Margin debt is accrued when someone takes out a loan and invests that money into the stock market. Due to historically low interest rates, the appeal of margin debt is much greater today than in previous bull markets. Based on the attractiveness of low-interest debt, it's likely that margin debt could surpass the adjusted highs set during the housing bubble. Look for January data to further support this.

One stock benefiting from the bull market
SolarCity (NASDAQ:SCTY.DL) has been a prime benefactor of the recent bull market, rising 403% year to date, compared to the Dow Jones Industrial Average's (DJINDICES:^DJI) gain of 13%. This rally stems from the belief that the company will continue to aggressively grow its install base, but there seem to be some problems brewing around how the company calculates its cost of capital, and it could be taking on unprofitable projects in the long term. This could be quite the volatile stock in 2014, and definitely one to watch during earnings seasons this year.

What to look for
In the following video, Motley Fool analyst Blake Bos goes over the most recent margin-debt data, gives examples of how margin debt works in the market, and explains how investors can make use of this data.