A big drug breakthrough pushes Furiex Pharmaceuticals into the lead, but Rubicon Minerals and Rentrak are flying high, too.

One of the best things about being a long-term investor is that the law of gravity doesn't have to apply to good stocks -- what goes up doesn't necessarily have to come back down. But some stocks can still fly too close to the sun, burning investors who bought in at too dear a price. When we're talking about momentum stocks, one investor's long-term winner could be another's warning sign, so it's important to separate the hype from the truth to find out just why a stock is really soaring today, and whether it can keep rising tomorrow.

Furiex Pharmaceuticals
Furiex continues the trend of biotech monster pops, as our first weekly recap of past-month performances was dominated by biotech doubles, and last week saw positive pancreatic cancer drug trial results push NewLink Genetics to a near-double. Furiex is up big for similar reasons -- its irritable bowel syndrome, or IBS, treatment eluxadoline came through with good data in phase 3 trials, and shares more than doubled in a day: 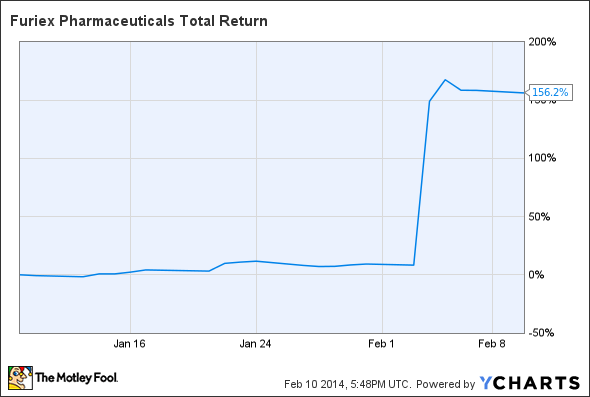 According to a company release, up to 28 million people suffer from the form of IBS eluxadoline is meant to treat, and Furiex will seek FDA approval for the drug this summer. That could bring even more upside, but it's hard to say how much -- the only price-target upgrade issued by any analyst since the test results were made public was Ladenburg Thalmann's boost to $137 per share, which is a 25% upside from here. That's solid, but hardly as spectacular as the stock's recent double.

Rubicon Minerals
Gold is again a glittering part of the complete investor portfolio after enduring a miserable 2013, and Rubicon has been coming along for the ride. However, that doesn't fully explain Rubicon's pop, as gold spot prices have risen less than 5% in the past month: 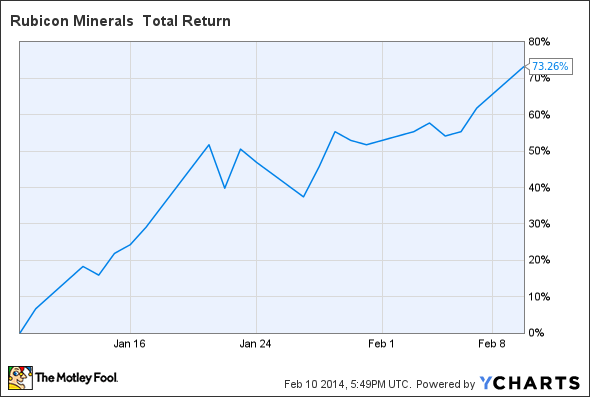 This thinly traded smaller miner has been rising since the end of last year on very little news, but investors may well be responding to the company's progress at its Red Lake property in Canada. The "Phoenix" deposit has a purported net present value of roughly $530 million, according to a recent Seeking Alpha forecast, which is a 27% upside from Rubicon's current market cap. However, several other Seeking Alpha reports have highlighted Rubicon's riskiness, as a significant chunk of the company's resource base is far from a sure thing. The Phoenix property lies in a well-established gold-producing region, which heightens the possibility of major extraction success. Still, this stock appears to be rising on hope, which, over the long run, is about as effective at keeping a portfolio solvent as hot air.

Rentrak
Rentrak is one of those companies you've probably interacted with dozens of times over the past few years without realizing it. It compiles weekly box office results, including demographic data, and it also analyzes viewership trends for television. The latter tidbit is key here, because Rentrak's big pop came after announcing that it had signed CBS up for its advanced demographics-rating service: 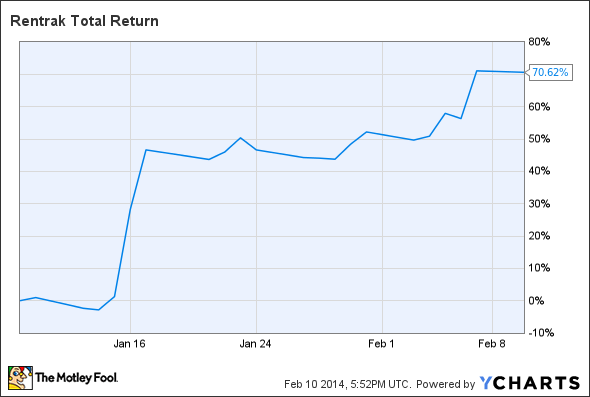 Rentrak has long trailed behind Nielsen (NLSN 21.18%) when it comes to television tracking, so this is an important win for the company. However, it's important to note that the company still operates at a loss, and despite a notable rise in revenue for its latest quarter, Rentrak's market cap remains at 6.6 times trailing-12-month sales. Rentrak is highly optimistic about its future, especially about the TV tracking segment, which it anticipates will grow its revenue at an annualized rate of 80% per year "for the next several years." That would result in the TV segment pulling in about as much in annual revenue as Rentrak makes as an entire company today by some point between late 2015 and mid-2016. That might be worth a small investment, but Rentrak has yet to show the market that it can sustain long-term growth on the bottom line and on the top.