Increased access in the US is great news, but there are still reasons to remain concerned.

About half of insured Americans now have access to Arena Pharmaceuticals' (ARNA) anti-obesity drug Belviq thanks to deals with Aetna and more recently CVS Caremark. Despite crossing these important hurdles, investors should still be wary of an ongoing outcomes study and competition from Vivus (VVUS) and Orexigen Therapeutics (NASDAQ: OREX). While the market for a safe and effective obesity drug is an exciting opportunity, let's take a look at what could still go wrong with this stock.

An important hurdle
When the FDA approved Belviq, over a year and a half ago, the agency required a long-term outcomes study that should monitor about 12,000 patients. The trial, expected to start last month, will monitor patients receiving Belviq or placebo for about 5 years. If an independent monitoring committee reports a statistically significant increase in either cardiovascular events or conversion to type 2 diabetes, it's game over for Belviq.

If Belviq can successfully complete this trial, you can bet its sales will pick up. Until then, I expect physicians that remember the dexfenfluramine debacle will likely hold back from prescribing Belviq to some extent. During a late stage trial, less than half of patients exhibited a loss of more than 5% of total body weight. I think that when physicians balance the benefits such as modest weight loss against the unknown likelihood of serious side effects, the scales are not likely tip in Arena's favor often.

An important distinction
There's good reason to be wary of side effects with Belviq. Both fenfluramine and dexfenfluramine act on the 5-HT receptor family, as does Belviq. About a year after the FDA approved dexfenfluramine, physicians began reporting heart valve damage and pulmonary hypertension among its users. The number of patients that showed these side effects was small enough to escape detection during pre-commercial stage trials, but large enough among the wider population to result in their removal from the market in 1997.

Turns out it was unintended stimulation of the 5-HT2A and 5-HT2B receptor subtypes present on both heart valves and pulmonary arteries that has since been attributed to fenfluramine's serious long-term side effects. Belviq acts more specifically on subtype 5-HT2C, which is found in the brain and associated with feelings related to appetite. As such, it should be safe, but physicians, and investors, still have very good reason to wait for more cardiac and diabetes outcome data.

How important is Belviq to Arena's future?
Beyond Belviq, Arena has four compounds in early to mid stage development. The most advanced is APD811 for the treatment of pulmonary arterial hypertension (PAH). Most therapies for the indication are injected or infused, but APD811 can be delivered orally. Also, its pharmacokinetic profile suggests a single pill daily might do the trick. The company expects to begin a phase 2 trial in the first half of this year.

Even if mid and late stage development of this PAH therapy goes as well as can be hoped, it is unlikely to reach the market before the Belviq outcomes study is finished. It seems Arena will be almost entirely dependant on Belviq revenue for the long term. The good news is that the company is fiscally responsible and has plenty of cash to keep the lights on while physicians slowly gain confidence with the drug. 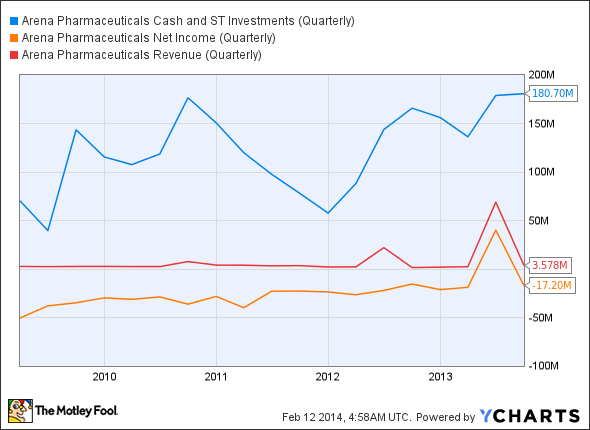 The competition
Qsymia from Vivus combines phentermine and topiramate. Both affect patients' perception of appetite and satiety, but act via a different mechanism than Belviq. Overall, Qsymia appears more effective than Belviq, both in terms of average amount of weight loss and percentage of patients exhibiting significant weight loss levels.

Qsymia won approval in the US in July 2012, less than a month after Belviq. But Vivus hasn't has nearly as much luck in the EU. In October 2012 and again in February 2013, the CHMP refused to to recommend its marketing approval due to safety concerns.

Moving up from behind is Orexigen Therapeutics and its obesity contender, Contrave. Like Qsymia, this is a combination of two previously approved drugs. But unlike Belviq and Qsymia, Contrave is not considered a controlled substance, a fact that physicians should appreciate, if it wins approval.

It looks like marketing of Contrave could begin sooner rather than later. Although the FDA took issue with a lack of sufficient safety data in early 2011, the agency seems to have softened its stance. Orexigen has been allowed to resubmit, and we should know if Belviq has another competitor in the U.S. market by June 2014.

Final take
Arena is looking at what will probably be a slow rollout, due to well deserved caution, and a slight, but real possibility of removal from the market if Belviq fails a 5 year outcomes trial. The company's four early stage compounds are much better than nothing, but for now practically everything hinges on that outcomes trial.

Regulatory concerns aside, competition in the U.S. from Vivus' Qsymia and potentially Orexigen's Contrave are likely to put a significant amount of pressure on sales. Terms of the partnership with Eisai will further limit the amount of profits available to Arena. To me, it seems the limited upside doesn't outweigh the potential losses.