Which states reported the worst Obamacare enrollment figures? There's a better chance than you might think that your state is on the list.

Yet another batch of numbers have been released for enrollment on the marketplaces established as part of the Affordable Care Act, commonly known as Obamacare. Around 3.3 million Americans have now signed up. That's worse than the 4.4 million projected for the end of January by Centers for Medicare and Medicaid Services, or CMS. However, it's better than many expected after the disastrous launch of the online exchanges.

Digging into the data reveals that some states lag well behind others. Which states have the most abominable Obamacare enrollment numbers of all? It depends on your perspective. Here are two ways of ranking the worst-performing states. 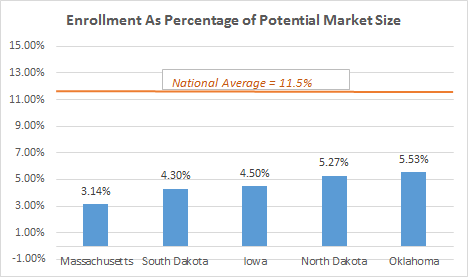 Massachusetts comes in at the bottom of the list. However, it's important to note that the state already implemented a health insurance program several years ago that is similar in many respects to Obamacare. A lower enrollment figure for Massachusetts, therefore, shouldn't be a surprise.

All of the other four states performing the worst in terms of enrollment as a percentage of potential market size rely on the federally operated HealthCare.gov website. South Dakota reported only 5,077 individuals signing up for health insurance -- 4.3% of the state's potential market size as estimated by the Kaiser Family Foundation. Iowa wasn't far behind with a 4.5% figure, representing 11,788 enrollees.

North Dakota and Oklahoma rounded out the bottom five using this method. Both states reported enrollment as a percentage of potential market size less than half of the national average.

By percentage of younger enrollees
Looking at low enrollment might not be the best way to determine which states have the most abominable numbers, though. Ranking states by the percentage of young, presumably healthier individuals is probably a better approach. If too few younger residents sign up for Obamacare, insurers could incur losses. 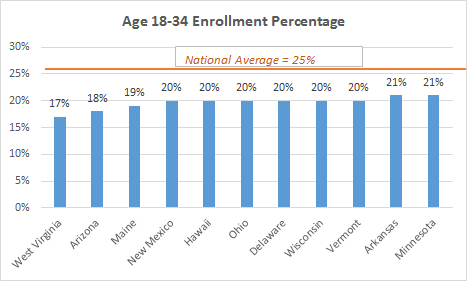 West Virgina, Arizona, and Maine stand out as the three worst states in terms of enrollment of younger individuals desired by health insurers. There is a six-way tie for fourth-place. New Mexico, Hawaii, Ohio, Delaware, Wisconsin, and Vermont all reported only 20% of total enrollment from residents between the ages of 18 and 34. Fifth-place also ended in a two-way tie between Arkansas and Minnesota.

If we use actual enrollment numbers of younger residents to break the tie, the worst-performing "honors" go to Hawaii and Delaware. The Aloha State only reported 723 younger residents signing up for health insurance. Delaware wasn't much higher, with 985 residents between the ages of 18 and 34 enrolling.

How abominable is abominable?
Actually, the numbers reported by the states are worse than the actual enrollment figures. That's because the Health and Human Services totals include individuals who haven't paid their first month premiums. These non-payers won't really be enrolled by health insurance companies. The problem is: We don't know how many haven't paid yet.

Aetna (AET), however, said recently that over 70% of individuals signing up for insurance through the Obamacare exchanges have paid their first premium. The large insurer isn't participating in any of the states ranking at the bottom in terms of enrollment as a percentage of potential market size.

Even though total Obamacare enrollment might be well behind projections, it's not a big problem for everyone. WellPoint (ELV 0.50%) announced that enrollment in its Obamacare health plans is ahead of expectations. CEO Joe Swedish said that the company is "encouraged" by its results so far.

However, even surpassing expectations might not be good enough for WellPoint. Analyst A.J. Rice of UBS estimates that the company could report a net loss of $236 million in 2014 due to its participation in Obamacare exchanges. While WellPoint will gain some individual customers from the Obamacare signups, Rice doesn't think that will be enough to offset the number of customers the company will lose because of health reform.

What about those low numbers of young Americans enrolling? That could be a bigger issue, but research by the Kaiser Family Foundation suggests the problems won't be too damaging. According to Kaiser, even if enrollment of younger Americans is 25% of total enrollment, "overall costs in individual market plans would be about 2.4% higher than premium revenues."

So while the states discussed above do have the worst Obamacare enrollment numbers, those sub-par results might not matter much in the big scheme of things. Today's abominable figures probably won't seem all that abominable down the road.

Is This Fast-Growing Dividend Stock a Buy?
351%