The economics of an Apple iTV simply don't make sense, and here's why.

For a good long while, many have believed that the "next big thing" -- both figuratively and literally -- from Apple (AAPL -0.34%) would be a smart TV. Everybody from the typical retail investor to some of the sell-side analysts were promoting the idea that Apple would get into the TV business and revolutionize it in much the same manner that it did computers, phones, and tablets. However, a sober look at the sheer economics of an alleged Apple smart TV simply don't make sense.

TVs are a commodity
In TVs, the heavyweights are the likes of LG, Samsung (NASDAQOTH: SSNLF), and Sharp. One commonality between all of these players is that they all manufacture their own displays, which is one of the largest -- if not the largest -- parts of the bill of materials for a TV. Apple, right off the bat, would be at an immediate cost disadvantage. Even with in-house component manufacturing, the margins in this space are just terrible, as shown here: 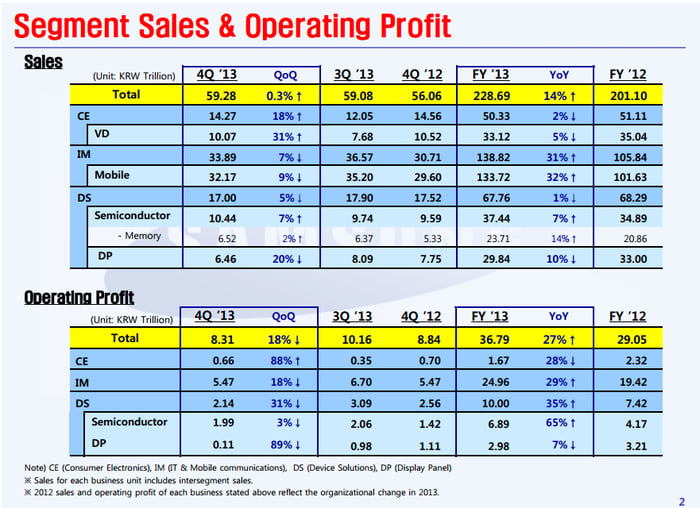 Indeed, operating margin in Samsung's consumer electronics division was a mere 4.6% in the most recent quarter -- a seasonally strong one, to boot -- and Samsung is the leading vendor in this space. Apple wouldn't really stand a chance at anywhere near the same price points as Samsung. It's also very unlikely that Apple could command a premium to Samsung's prices and achieve the kinds of volumes that it would need in order to call such a venture a success.

Apple likely can't replicate iPhone/iPad success with TVs
The key to Apple's success in phones and tablets is that it has been able to bring high-volume, relatively affordable products that are accessible to the vast majority of the middle/upper class. Further, Apple has relied on the fact that these items come at such an accessible price point that the upgrade cycles are relatively short, keeping sales robust. A TV is not the kind of product that Apple needs to drive revenue and profit growth in a manner similar to the way the iPhone and iPad did. It will take something different -- and that's what Apple's management and engineering teams need to figure out.

Just what could those items be? Well, the rumored iWatch seems like a good start, and if anybody could disrupt the watch market, Apple seems like a pretty solid contender. Some may point to the "failure" of the Galaxy Gear from Samsung as a reason to doubt the viability of the smart watch, but it's important to understand that there were "smartphones" before Apple's iPhone (think the LG Prada phone, for example), but none of them were done quite right.  If Apple does a "great" smart watch, then there's a chance that it could really take-off.

But what Apple needs to do is something that's accessible to the masses and something that can be improved/iterated upon quickly. A $299 watch makes a whole lot more sense than a $1000+ TV for this purpose, but only time will tell what Apple really has up its sleeve this year and beyond.