Pioneer Natural Resources is sitting on a massive amount of oil. Yet, 185 million barrels of its oil recently vanished. How can this be?

Pioneer Natural Resources (PXD -1.99%) looks to be sitting on an unbelievable amount of oil and gas. The company now controls about 845 million barrels of oil equivalent, or BOE, proved reserves and thinks that number is only the beginning. However, on paper, its reserves are actually slowly shrinking.

Recently, the company reported its latest reserve numbers, which showed a curious negative revision to its proved reserves. The company actually axed nearly 185 million barrels of oil from its books along with another 115 billion BOE of natural gas and natural gas liquids. With oil currently selling for about $100 per barrel, that's a lot of potential future revenue that just got wiped out. It also makes one wonder how over a hundred million barrels of oil can simply vanish?

The horizontal shift
Pioneer Natural Resources is one of the many energy companies in America that has made the switch from drilling vertical wells to horizontal wells. Because of this, the company isn't going to be drilling all of its planned vertical wells. It will instead eventually drill horizontal wells to tap the oil and gas located in these areas. However, because there isn't enough current data on the horizontal wells that Pioneer Natural Resources has drilled so far, it can't support the replacement of the previously booked vertical reserves with new horizontal reserves. This is how hundreds of millions of barrels of oil simply vanish, at least on paper.

This isn't an occurrence limited to Pioneer Natural Resources. Fellow Permian Basin driller Laredo Petroleum Inc (LPI 2.54%) also revised millions of barrels of oil off of its proved reserve estimate. Its latest proved reserve estimate shaved 18 million barrels of oil off its book. However, Laredo Petroleum had to do this because it also has removed vertical drilling locations in favor of adding higher return horizontal locations.

The great reappearing act
While these companies can't put these new reserves on the books just yet, that doesn't mean these reserves won't be added in the future. In fact, Pioneer Natural Resources expects it should be able to add more than 600 million BOE of new horizontal reserves by the end of 2016. That's on top of the 72 million BOE in new horizontal reserves the company already added this year from its horizontal development in the Permian Basin. That, however, is just the tip of the iceberg for Permian Basin drillers like Pioneer Natural Resources. 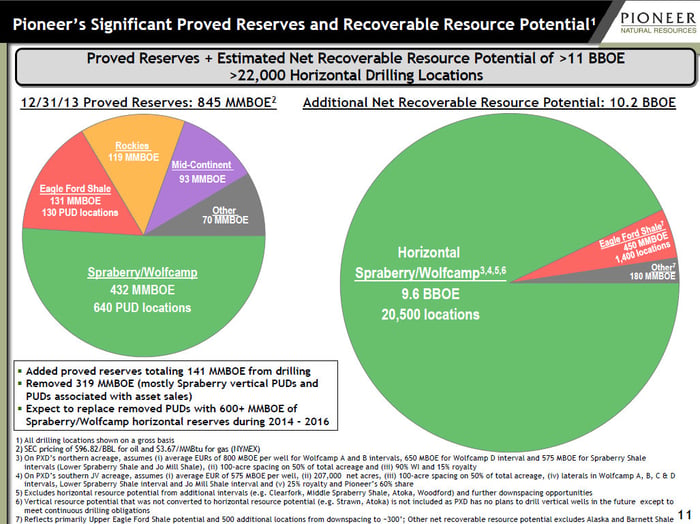 It's a similar story at other Permian focused drillers. Diamondback Energy Inc (FANG 0.87%), for example, has proved reserves of 63.6 million BOE. However, as it adds up the resource potential from new horizontal targets like the Wolfcamp, Spraberry, and Cline formation, it sees total horizontal resource potential of 393 million BOE. That's a pretty compelling upside for Diamondback Energy investors, and right in line with what others are seeing.

Investor takeaway
The switch from vertical to horizontal drilling in the Permian Basin is causing companies like Pioneer Natural Resources and Laredo Petroleum to shave off millions of barrels of oil reserves. However, the disappearance of those reserves is only temporary. Once these companies have more data, it's quite likely they will add back an even greater number of future reserves.