Please ensure Javascript is enabled for purposes of website accessibility
Log In Help Join The Motley Fool
Free Article Join Over 1 Million Premium Members And Get More In-Depth Stock Guidance and Research
By Daniel B. Kline – Feb 19, 2014 at 1:18PM

While Microsoft is showing it can claw its way into the smartphone market, BlackBerry is losing market share and nearing the end. 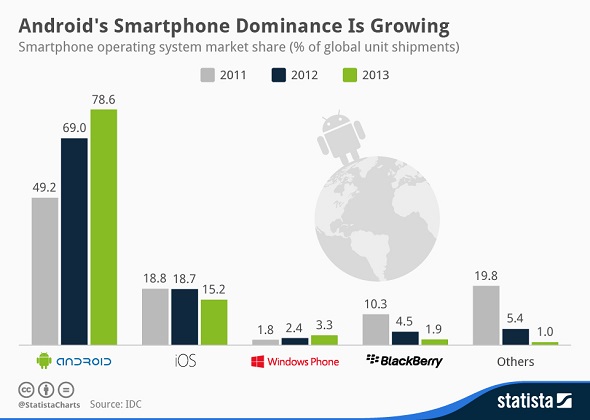 Smart phones are a growing market

While Apple's share of the market is slipping, the actual smartphone market is getting bigger. According to the International Data Corporation Worldwide Quarterly Mobile Phone Tracker, as reported by MacDailyNews, vendors shipped just over a billion smartphones worldwide in 2013, up 38.4% from the 725.3 million units in 2012.

Among the top trends driving smartphone growth are large-screen devices and low cost, said Ryan Reith, program director with IDC's Worldwide Quarterly Mobile Phone. "Of the two, I have to say that low cost is the key difference maker. Cheap devices are not the attractive segment that normally grabs headlines, but IDC shows this is the portion of the market that is driving volume."

An increase in demand for lower-cost devices certainly supports Android over Apple. With so many manufacturers making Android devices, there are phones all over the price spectrum, whereas Apple only makes high-cost phones.

While the chart above suggests that Microsoft should be at least optimistic about its phone's growth, where it's growing gives the company even further reason to be excited. The company sent a statement to Neowin.net that claimed Windows Phone is the #2 smartphone operating system in 14 markets, and shipped more units than iPhone in 24 markets in Q3.

The 14 markets where Microsoft claims to be #2 to Android are India, Mexico, Italy, Chile, Thailand, Vietnam, Malaysia, Poland, South Africa, Ukraine, Hungary, Finland, Czech Republic, and Greece. And while those markets certainly aren't the United States or Japan, they do bode well for the company.

"What's notable about the markets listed is that most of them are emerging markets where the high-priced iPhone has more limited appeal," wrote Brad Reed on BGR.com. " This jives well with what we've been reading about the very strong sales of the Nokia Lumia 520 and 521 models, which are budget smartphones that Microsoft has been pushing aggressively in emerging markets."

BlackBerry, meanwhile, has falling market share and its last major phone launch bombed. As recently as 2012, though, the company was still a major player in the developing world.

In December 2012, Canada's Globe and Mail newspaper reported that BlackBerry was still the top phone in Africa. "The story is much the same in Mexico, Indonesia, and many of the world's other booming emerging markets, where [BlackBerry] leads nascent smartphone sectors with as much as a 60% market share," according to the article.

The company, which in November 2013 ousted CEO Thorsten Heins, may be dead as a smartphone player, but it may have a future as a software provider. On Feb. 13, BlackBerry launched a version of its BBM instant message service for iPhones and Android phones. And while its too early to tell what impact opening up BBM to non-BlackBerry owners will have, the company still has about $2 billion in cash or cash equivalents to buy time to figure out a future.

$2 billion may not rival Apple or Microsoft for cash on hand, but after numerous rounds of layoffs and other cost-saving measures, the situation is not immediately dire. BlackBerry is no longer a smartphone player, but it may well still end up as a viable business.

How big is the smartphone market?

Apple has been unwilling to offer a cheap phone and if it stands firm on that, Android and Windows will continue to climb in market share. That, however, may not matter to Apple. Its phones, with their higher margins, will remain aspirational. As developing countries develop, perhaps their citizens schooled on cheaper Android and Windows phones will be willing to pay more to upgrade to a premium experience.