A negative temporary event often presents the best opportunity to invest in a growth company at a discount. Is this one of those opportunities for savvy investors?

Unlike Under Armour (UAA 1.60%) in its most recent quarter, the U.S. speedskating team has been unable to deliver despite high expectations. However, is Under Armour to blame? More importantly, does it matter for investors?

The drama
Under Armour and Lockheed Martin(LMT 2.59%) teamed up to form the "Mach 39", which was advertised as the fastest speedskating suit in history. Considering the U.S. speedskating team's failures up until this point, this isn't just an embarrassment for Under Armour, it's one for Lockheed Martin as well. It's possible that neither of them is to blame. That depends on who and what facts you believe. However, the perception is more important than the facts, and the perception is that the Mach 39 is a failure, which puts into question Under Armour's and Lockheed Martin's technological capabilities for improving the performance of professional athletes.

Of course, this will have absolutely no impact on Lockheed Martin's underlying business or stock price. Under Armour, on the other hand, has more to lose because these failures took place on its playing field. As far as the effectiveness of the suit, that's in question. Some skaters and coaches claim that the suits have nothing to do with the U.S. speedskating team's failures. However, U.S. speedskater Brian Hansen, while raving about all of the qualities of the suits, also dropped a hint by stating that the suits were so tight that they made it difficult to breathe.

The common conception is that the vents on the back of the suit -- designed to release heat -- create drag, which then prevents skaters from maintaining the correct form. Another possible cause of the poor performance is that the U.S. speedskating team never tested the suits out in competition prior to the Olympics. That could be a major factor. Additionally, the team trained at a high elevation in Italy, and on a different type of ice than what is found in Sochi.

The possibilities go on and on. While nobody knows the real reason why the U.S. speedskating team has faltered, it should be noted that the Dutch Olympic coach, Bert van der Tuuk, said that he tested a similar type of suit three years earlier and he abandoned it because it slowed skaters down by creating drag.

Under Armour's stock has suffered since this incident, but it's highly unlikely to have a long-term impact on the company and its stock price. If anything, this can be looked at as a potential entry point.

Under Armour vs. Nike
Under Armour and Nike (NKE 1.29%) will forever be tied together like Coca-Cola and PepsiCo. The difference in this competition is that Under Armour is still much smaller than Nike, which allows a lot more room for growth. For instance, in Under Armour's most recent quarter its revenue climbed by an astounding 35% year-over-year. Profit and direct-to-consumer sales increased by 28% and 36%, respectively.

In Nike's most recent quarter, its revenue increased by 8% year-over-year, its income from operations grew at a 3% clip, and its direct-to-consumer sales delivered 20% growth. These are impressive numbers, but they're still not as impressive as those of Under Armour.

If you're OK with accepting more risk, then consider the top-line and bottom-line growth of these companies over the past five years. The comparison pretty much tells the story of good and better: 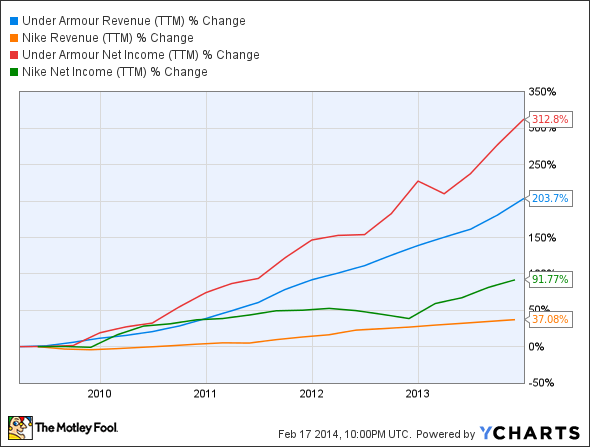 The Foolish takeaway
Under Armour is no doubt a long-term winner. Just look around the next time you leave the house. There's an excellent chance that you will see someone wearing Under Armour attire. The Olympic debacle is a temporary event that has hurt the company's stock price, which has given sideline investors an opportunity to invest in a high-growth company at a slight discount.

With Under Armour trading at a premium to Nike, not offering any dividends, and being more susceptible to economic setbacks due to its smaller size, some investors will feel safer investing in Nike.

These are both excellent companies. It comes down to moderate risk/high reward vs. low risk/moderate reward. Please do your own research prior to making any investment decisions.