In a previous article, I discussed three exciting ways that Google (NASDAQ:GOOGL) was revolutionizing the health care industry via new investments in biotech, medical devices, and electronic health records (EHRs). However, Google's (NASDAQ:GOOGL) chief rival in smartphones and tablets, Apple (NASDAQ:AAPL), also has some grand plans of its own for expanding into the health care industry.

Let's take a look at three ways Apple (NASDAQ:AAPL) could expand its footprint into health care, and how they could alter the path of a company mainly supported by sales of the iPhone and the iPad.

1. iOS 8: Apple's launchpad into consumer health care
According to a recent report at 9to5mac, Apple's (NASDAQ:AAPL) long-rumored iWatch will run on iOS 8, which will be designed with personal fitness in mind.

According to The New York Times, Apple also held a meeting with the FDA last December to discuss "mobile medical" and "health monitoring" applications, which strongly indicates that personal health care could take center stage in its upcoming release of iOS 8. Apple (NASDAQ:AAPL) also previously announced that the new M7 chip used in the iPhone 5S, which has built-in motion tracking capabilities, enables the development of a new generation of health and fitness apps.

The Galaxy Gear and Galaxy Gear 2 offer some fitness band features -- such as a calorie tracker, heart rate monitor, and a stress level meter -- but it's not much different from what Nike, Jawbone, and Fitbit already offer in their popular fitness bands.

2. An increased presence in hospitals
While iOS 8 won't arrive until September at the earliest, Apple already has a huge footprint in hospitals with its iPhone and iPad apps. A new generation of native EHR apps, which are tethered to the cloud rather than desktop applications, are quickly becoming a standard tool in documenting patient data in hospitals. 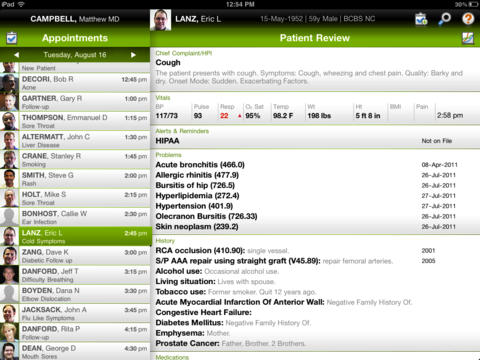 In my opinion, iPads are useful for EHRs and clinical documentation for four main reasons:

Therefore, the leading names in the EHR industry -- Allscripts, Cerner, Epic, and Greenway  -- now all offer native iPad EHR apps which eliminate the need for desktop software. Allscripts, in particular, even opened up a medical app store within its Allscripts Wand app last August.

3. Augmented reality and accessories
However, EHRs are only part of the story.

When an iPad's accelerometers and gyroscopes are used in tandem with its camera, doctors can use the device as an augmented reality viewfinder. In other words, doctors can hold up the iPad to a patient's body and see a real-time computerized model of the patient's bones, organs, and veins. Last August, doctors used the Fraunhofer MEVIS app to conduct a surgery using the iPad as a window to "see" the location of critical veins.

On February 19, the FDA cleared Carestream's VUE Motion, a mobile radiology viewing and reading app for iOS and Samsung Galaxy devices. The significance of the FDA clearance is that it allows radiologists to not only view but read images, which allows them to make clinical reports based on the images in the app.

Meanwhile, the iPhone has become a popular platform for portable medical device makers. Since the iPhone is essentially an ultraportable computer, various medical devices such as ultrasound wands, ECG monitors, and smart glucose monitors can be synchronized to it via wired or wireless connections. By using the iPhone as the brains of the device, these medical devices have become cheaper and more portable than ever, which allows them to reach patients in lower-income or remote areas.

The obstacles ahead
Although the use of iPads and iPhones as medical tools is rising, a partial reinvention of Apple (NASDAQ:AAPL) as a company increasingly focusing on health care could face some major headwinds. The health care industry is a slow moving, highly cautious one that is skeptical of new medical technologies, especially those that can be installed on millions of iPhones and iPads worldwide.

If Apple (NASDAQ: AAPL) truly intends to make personal health care a major part of the iOS 8 upgrade and the iWatch, it certainly has lots of regulatory hurdles to clear. If it is successful, however, it could be a revolutionary leap forward toward achieving the dream of constant, cloud-based health care, which will vastly improve the public's knowledge of their own health.

In hospitals, iPads and iPhones represent an impressive self-evolution of medical infrastructure. Physicians are increasingly bringing their own devices to work, and companies are delivering the necessary apps straight to these tablets and smartphones.

However, the unified nature of Apple's (NASDAQ:AAPL) software and hardware ecosystem -- which is easier to develop for than the fragmented Android universe -- will continue making iOS the preferred platform for new medical apps and devices.

Therefore, while many investors have been looking forward to Apple's(NASDAQ:AAPL) next big consumer product, Apple (NASDAQ:AAPL) could announce a much more ambitious expansion into the world of health care later this year.