Wal-Mart is blaming its weak performance on the economic environment, but competition from Amazon and Costco could be a more serious risk for the company.

Wal-Mart (WMT -1.93%) reported lackluster financial performance on Thursday, and management is blaming the company's problems on a variety of economic headwinds. On the other hand, competition from players like Amazon (AMZN -1.57%) and Costco (COST -1.40%) seems like a much more worrisome risk for investors in Wal-Mart over the long term. 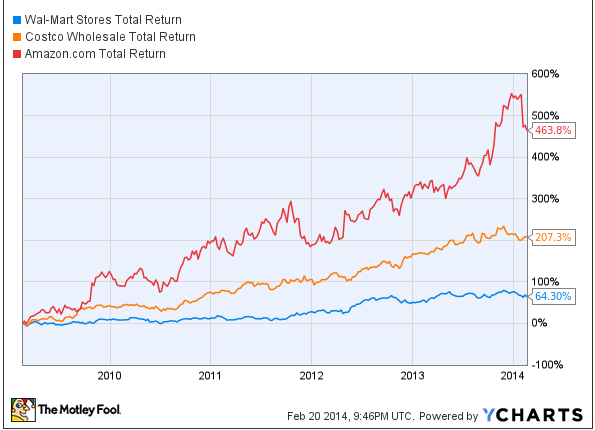 A stagnant giant
Wal-Mart reported net earnings of $1.6 per share for the three months ended on Jan. 31. This was marginally above analyst´s expectations of $1.59 per share, but 4% lower than the $1.67 per share the company earned in the same period last year.

Total revenues increased 1.5%, to $129.7 billion, in the quarter; however, the company delivered declining same-store sales in the U.S., both for the quarter and the full year. Comparable store sales in Wal-Mart U.S. declined 0.4% in the 14 weeks ended on Jan.31, and 0.6% during the 53-week period.

Even worse, guidance for fiscal 2015 was particularly weak. Management is expecting earnings per share in the range of $5.1 to $5.45, materially lower than the $5.54 per share estimated on average by Wall-Street analysts.

The company also announced a lackluster dividend increase of 2%, from $1.88 per share to $1.92. Wal-Mart has a long trajectory of recurrent dividend increases, which has now reached 41 consecutive years, so the company is understandably trying to stay on track and continue building its dividend growth track record.

However, a 2% increase cannot be interpreted a vote of confidence when it comes from a company that used to increase payments at a much more vigorous rate in recent years. As a reference, in February of 2013, Wal-Mart raised dividends by 18%; management seems to be taking a defensive position with the uninspiring dividend increase announced for this year.

Wal-Mart blamed its weak performance and lower-than-expected guidance on a variety of economic and cyclical headwinds:

Some of the factors affecting our consumers include reductions in government benefits, higher taxes and tighter credit. Further, we have higher group health care costs in the U.S. These concerns, combined with investments in e-commerce, will make it difficult to achieve the goal we have of growing operating income at the same or faster rate than sales. In October, we forecasted a 3% to 5% net sales increase for fiscal 2015. Given these factors and the ongoing headwind from currency exchange, we expect to be toward the low end of the net sales guidance.

A changing competitive landscape
Harsh weather, and weak consumer spending, have been a very real problem for different companies in the retail business lately. However, Costco is facing the same challenging environment as Wal-Mart, yet the company is reporting far better performance.

Costco announced an increase of 5% in comparable sales in the U.S. during the 22-week period ending on Feb. 2 when excluding foreign exchange fluctuations and the impact of gasoline prices. U.S same-store sales during January grew by the same amount versus January 2013.

Costco's performance compares quite favorably versus the 0.1% decline Wal-Mart reported in Sam's Club comparable-store sales, excluding fuel, for the 14 weeks ending Jan. 31. Costco is not only outgrowing Wal-Mart on a total sales basis, but also when it comes to its direct competitor in the warehouse business, Sam's Club.

Amazon is unquestioningly the most disruptive force that the retail industry has seen in decades, and the company continues gaining market share in different categories as time goes by. Total sales during the fourth quarter of 2013 increased by 20%, to $25.59 billion, and North America was even stronger with a 26% increase in sales, to $15.33 billion, during the period.

Amazon now has "tens of millions" of members in its Amazon Prime program. This increases the frequency of purchases and the average transaction amount, and it's also a powerful tool for Amazon to consolidate customer loyalty and strengthen its competitive position in the industry.

Online is a key area in the retail business, and Wal-Mart is showing considerable progress in that segment, with global e-commerce sales growing by 30%, and the company surpassing the $10 billion mark in e-commerce revenues during the year.

However, as online becomes an increasingly bigger part of the retail business, the changing battlefield will most likely benefit Amazon more than Wal-Mart in the retail war.

Bottom line
The economic environment has been quite challenging for different retailers lately, and Wal-Mart cannot be expected to be immune to industry headwinds. On the other hand, the company seems to be clearly losing market share versus competitors like Amazon and Costco, and this could be a far more serious and permanent problem for Wal-Mart, as opposed to transitory economic headwinds.