Verizon is the Dow's largest individual gainer by far today -- but did you know that two other Dow stocks added more points to the blue-chip index despite notching smaller overnight gains?

It all comes down to the Dow's price-weighted nature. Let's say you wanted to build a portfolio that copies the Dow as closely as possible. You wouldn't invest equal dollar amounts in each of the 30 Dow stocks, and you wouldn't weight the portfolio according to market caps, either -- for that, the cap-weighted S&P 500 would be more appropriate.

Instead, your Dow clone would have to buy an equal amount of shares of each stock from the index. That way, you'd mimic the average's price weighting by investing more money in high-priced stocks and less in stocks with lower share prices.

Today, you could build a portfolio like this for $2,515 (plus commissions for 30 trades). Building a total portfolio value that mirrors the current Dow score of 16,150 would require an awkward 6.42 shares per ticker.

And that's why Verizon's large jump was about as important to the Dow as the much smaller moves in Exxon, Chevron, and 3M. Here's how their weightings work out, with largest Dow component Visa (NYSE:V) thrown in for a sense of scale: 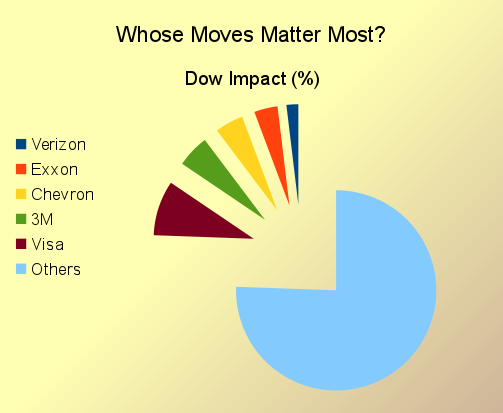 As you can see, Exxon and Chevron wield about twice the heft of Verizon thanks to their double-up share prices. 3M runs even further ahead, which is why a bit of random market noise can move 3M's Dow needle as far as a prestigious upgrade for Verizon. And Visa matters five times as much to the Dow's overall health as Verizon does.

If the Dow were reweighted along the market cap lines of the S&P 500, the picture above would look more like this: 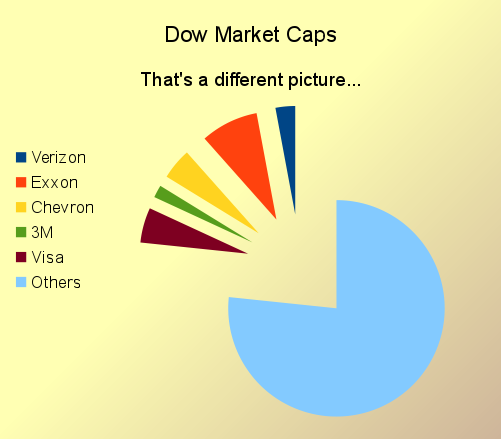 In this alternate universe, Verizon would outrank 3M, while Visa would fall far below Exxon and basically tie Chevron. And again, neither one of these approaches gives equal credence to each and every member stock. That's how most of us build our own stock portfolios, but not how the big market indexes work.