The world's largest athletic-wear company has changed the game in more ways than one over its five decades in existence.

The Dow Jones Industrial Average (^DJI 0.09%) is barely touching positive territory this Friday, as investors struggle to determine whether the latest economic news is bad enough to send them scurrying from their holdings. Many Dow components are essentially flat, but a few are helping the index hold onto a small gain. One of the strongest gainers this afternoon is also one of the Dow's newest stocks: Nike (NKE 0.11%), which has only been a component for five months, was up nearly 1% at 12:45 p.m. EST.

You probably know a few things about Nike. You've probably owned at least one Nike-branded article of clothing or footwear -- the company's $14.5 billion in global footwear sales last year would work out to roughly 290 million pairs of shoes if the average sale price were $50 -- but do you really know Nike? Here are a few interesting facts about the world's largest athletic-wear company:

Nike co-founder Phil Knight, came up with the idea for a company while working on his MBA at Stanford, drawing on his experience as a track athlete as a University of Oregon undergraduate. In 1964, he teamed up with his former track coach, Bill Bowerman, to produce competitive track shoes through a Japanese manufacturer.

Knight and Bowerman initially put in $500 each to form Blue Ribbon Sports, which changed its name to Nike in 1971 to evoke the Greek goddess of victory. Today, Knight's stake in Nike is worth roughly $10.2 billion, which works out to an annualized growth rate of 40% on his initial investment over the past 50 years. Knight's total net worth  was recently estimated at $16.3 billion, so he's clearly made some other savvy investments over the years as well.

Nike's iconic "Swoosh" logo was created by Carolyn Davidson, a graphic design student at nearby Portland State University, in 1971. Knight was teaching accounting to make ends meet and approached Davidson to ask for a design with "movement." She charged him $35 -- $2 per hour -- and Knight accepted with reservation, believing that the design would grow on him over time. Knight later rewarded Davidson with an unknown amount of Nike stock in 1983. If we assume that the initial gift was for 100 shares and Davidson reinvested her dividends and never sold, her reward for creating that world-famous Swoosh has now grown to roughly $375,000. 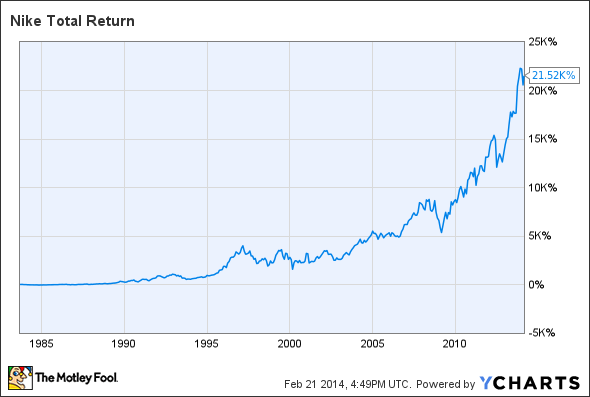 Nike has been paying dividends since 1984. The difference between reinvesting those dividends and not reinvesting them is worth a total gain of roughly 7,600% -- which would have cost you about $76,000 in gains on an initial $1,000 investment. 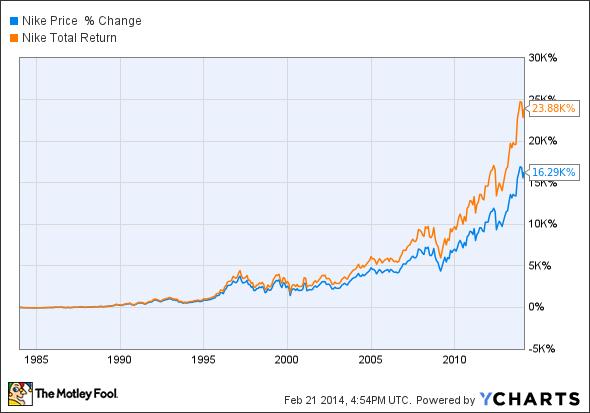 Nike was a pioneer in athlete sponsorships. Its first athlete endorser, Olympian track runner Steve Prefontaine, was recruited in 1972 after a successful track career under Bowerman's coaching at the University of Oregon. Prefontaine appeared on the cover of Sports Illustrated and other sports-centric magazines thanks to his unbeaten record at home on Oregon's Hayward Field.

Signing Michael Jordan before he even stepped onto the court for the Chicago Bulls proved to be a marketing masterstroke for Nike in 1984. The Air Jordans debuted on Jordan's feet in 1984 and in stores in 1985. The Air Jordan lineup is more than twice as popular today as it was during the peak of Jordan's career, and Jordan himself earns an estimated $60 million a year from his endorsement.

Nike will spend a whopping $909 million on endorsement deals with athletes and sports organizations during its 2014 fiscal year, which ends in May. That's $200 million more than Nike paid in dividends during the 2013 fiscal year!

Are there any interesting facts about Nike you think I've missed, but that the world should learn? Let us know by leaving a comment below.

The Motley Fool recommends Nike. The Motley Fool owns shares of Nike. Try any of our Foolish newsletter services free for 30 days. We Fools may not all hold the same opinions, but we all believe that considering a diverse range of insights makes us better investors. The Motley Fool has a disclosure policy.