Please ensure Javascript is enabled for purposes of website accessibility
Log In Help Join The Motley Fool
Free Article Join Over 1 Million Premium Members And Get More In-Depth Stock Guidance and Research
By Jeremy Bowman - Feb 22, 2014 at 7:30AM

Hello brand oral-care products have not even been on the market for a year, but based on the company's newest line of toothpaste, Procter & Gamble may already be feeling the heat.

In his new book David and Goliath, author Malcolm Gladwell explores a variety of underdog tales, seeking to show that "We have a definition in our heads of what an advantage is — and the definition isn't right." "It means that we underestimate how much freedom there can be in what looks like a disadvantage," he argues.

In business, it's easy to assume that bigger is better, but investors must also understand the advantages that small operators and niche players can have, especially at a time when the consumer brands that have dominated the market for so long seem to be faltering. Beverage giants Coca-Cola and Pepsi have seen declining soda sales at home for years, and both have had to acquire smaller players with unique offerings to get access to growth. McDonald's has faced flat comps for the past several quarters, even while sales have been surging for fast-casual stars like Chipotle. And consumer staples giants like Procter & Gamble (PG 0.26%) are struggling to eke out every point of growth, and searching just as desperately to cut costs at the same time.

Founded just three years ago, Hello began shipping its products to retail outlets last March, and the company's offerings are now available in more than 20,000 stores, including Walgreen and CVS. Founder/CEO Craig Dubitsky set out to create a "friendly" oral care brand, and believed that the mainstream advertising directed at "killing and fighting" things was misguided. Dubitsky said the staidness of the category bugged him, and he brought his experience turning commodities into personalized brands in areas like cleaning products and lip balm to the oral care segment. He hired BMW Designworks, instead of a standard packaged-goods designer, to design the products, and uses 99% natural ingredients, lending Hello a unique look, taste, and feel. Those choices are already having an impact, as Dubitsky says the response from customers has been overwhelmingly positive. Some of them have said to him, "Why wasn't it always like this before?" And they're speaking with their wallets, too, as Hello's breath spray has already grabbed 22% share at Walgreen's stores.

Dubitsky keeps his focus on product, saying he wants to be in the business of magic, not math, but the executives at Procter & Gamble seem to have already taken notice. Last month, the company's Crest brand introduced a new line of toothpastes called Crest Be, available in flavors such as Lime Spearmint Zest, Vanilla Mint Spark, and Mint Chocolate Trek. Hello's toothpaste, by comparison, comes in flavors including Supermint, Mojito Mint, and Sweet Cinnamint. P&G calls its new products "an innovative new line of toothpastes that combines unexpected flavors with refreshing cleansing benefits." 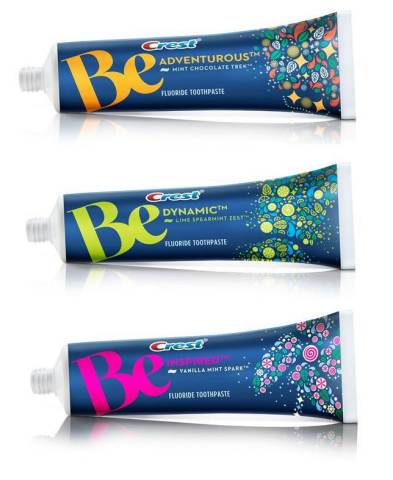 Dubitsky, however, does not see the copycat move as a threat, but rather a validation that his company was on the right track. Crest's imitation is turning an item -- alternative toothpaste -- into a category, similar to the way that energy drinks went from just Red Bull to whole coolers full of different flavors.

What it means for the big boys
Dubitsky seems to have his focus in the right place, noting that oral care is an incredibly stable category, which is one reason it's seen so little innovation over the past decades. His focus on design has made him look at the segment from a different angle, however. He says many products on drugstore shelves were designed for the '50s-style homemaker, but even though society has changed since then, personal care products have not always adapted. "There are no boring categories," he says, insisting that there should be no commoditized products. To assume something as simple as toothpaste is a commodity is a "tired approach."

Dubitsky says he dislikes focus groups, but he seems to have his finger on the pulse of changing consumer habits. In the age of social media and personalized everything, it makes sense for stale categories like oral care to get a reboot. Companies like Procter & Gamble will always have advantages in distribution and economies of scale, but a small start-up like Hello has the flexibility to try new things, and the freedom to be disruptive. Dubitsky doesn't see himself as a competitor, just a company offering a different product, but upstart innovators like Hello could spell trouble for the industry heavyweights down the road. P&G may want to heed a warning that Warren Buffett gave to Coca-Cola last year: "We want to see what has caused businesses to go bad, and the biggest thing that kills them is complacency," he said. "You want a restlessness -- a feeling that someone's always after you, but you're going to stay ahead."

Companies like P&G want to be leaders, not followers, but its latest move makes it seem like the tail is wagging the dog. And Hello may just be getting started. The company recently expanded into Canada, and Dubitsky said his company has new products planned for later this year. He would not identify anything in particular, but don't be surprised to see Hello items like dental floss or gum hit the shelves as the company tries to reintroduce some friendliness to those categories.

For heavyweights like P&G, the challenge now may be: How does a nearly 200-year-old multinational enterprise out-innovate the innovator?