Many billionaires have taken the side of Republicans in recent years, but one is putting his millions behind Democrats as he fights the Keystone Pipeline.

The ultra-rich are often perceived as having an unfavorable view of the planet, but one man is trying to change that. 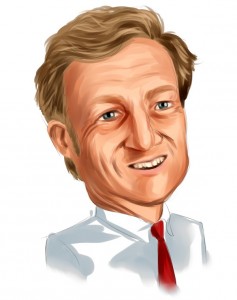 At last count, Thomas Steyer was ranked #352 on the Forbes 400 list, and Bloomberg estimates his fortune to stand at $2.6 billion through his work at his San Francisco-based hedge fund, Farallon Capital Management. Farallon manages money primarily for college endowments, pension plans, and charitable foundations, and while he has since retired, Fortune Magazine once called him, "California's hedge fund king."

Although Steyer is not a household name like Warren Buffett, George Soros, Carl Icahn, or other big name investors, his moves to bring about environmental reform and awareness may change that entirely.

What he's done
The Fortune article mentioned earlier noted Steyer has been very open in his political activism and philanthropy efforts, but "Steyer and his partners at Farallon were not open-minded when it came to discussing the firm's operations. They refused to be quoted about Farallon, its funds, and investments for this story," so understanding Farallon's favors is few and far between.

Yet he has been a major proponent of "absolute-return," which seeks to employ a variety of strategies and investments to ensure the return of a fund is positive, but does not seek to beat the market over the short term. Finding the results of Farallon are difficult, but in 2008, it had a 22 year compound return of 16%, versus 10% for the S&P.

What he's doing
In 2012, Tom Steyer stepped down from Farallon to turn his focus from investing to climate change. In 2010, he signed Warren Buffett and Bill Gates' collective philanthropy effort, the Giving Pledge, where the ultra-wealthy promised to give away half of their fortunes to charitable causes.

He was an ardent supporter of President Obama in 2008, and agreed with the proposals to raise taxes on the wealthy, saying; "[w]e have to get back to a sense of shared national purpose and that we are connected and responsible for each other. The taxes proposed by Obama seem completely consistent with the idea we would actually try to do something together as opposed to scratching out the most for ourselves as individuals."

Now Steyer's efforts have focused almost exclusively on climate change and fighting the establishment of the well-known and highly controversial Keystone XL pipeline. Bloomberg recently reported he has pledged more than $50 million of his own money, and is seeking $50 million from other wealthy individuals to, "support candidates who want to address climate change in ways that Steyer backs," through his NextGen Climate Action Committee, where the Laurene Powell Jobs, the wife of the late Steve Jobs, also sits on the board.

While he was once an energy investor, he now staunchly believes in the reality of climate change, and has also teamed with former Treasury Secretary Hank Paulson and New York Mayor Michael Bloomberg to start "Risky Business," which attempts to quantify the economic impact and risks of climate change. He said in the announcement of the partnership, "[i]f the business of the United States is business, we need to frame climate change in economic language; we need to set the business context."

Tom Steyer concluded his letter announcing his support of the Giving Pledge by saying; "we relish the opportunity to do our part and leave our collective campsite cleaner and better tended than we found it. It's our pleasure as much as our obligation." He is truly doing all in his power to fulfil that aim.