Coca-Cola is facing a slowdown in soda consumption, but a high-quality company selling for a discounted valuation is usually an opportunity for long-term investors.

Coca-Cola (KO -1.37%) is going through a rough patch as slowing soda consumption in the U.S. and currency headwinds in emerging markets are hurting the company lately. However, Coca-Cola is a business of utmost quality, and the stock is now trading at attractive valuation levels. If the company manages to accelerate growth, Coca-Cola could offer substantial upside potential for investors.

Losing effervescence
Global sales volume increased by an uninspiring 2% in 2013, and net revenues fell by 2% during the period. Sales excluding currency headwinds and structural changes -- mostly deconsolidation of bottling operations -- increased 3% during the year, so performance was not as dismal as the headline figures may indicate, but the company is not generating much growth.

Health concerns regarding the company's two biggest brands, Coca-Cola and Diet Coke, have been a considerable drag on growth over the last several years, but it's important to consider that this is an industrywide phenomenon hurting all the different players, not just Coca-Cola.

Rival PepsiCo (PEP -1.38%) reported a decline of 1% in organic beverage revenue in the Americas region for 2013 as rising average prices were not enough to compensate for the 3% decrease in volume. Things are not that bad for PepsiCo when it comes to food and snacks, though; the division delivered a 7% increase in North America sales due to a 3% growth in volume and a 4% increase in prices during 2013. The trend toward healthier nutrition seems to be affecting drinks more than food judging by company-specific figures.

Dr Pepper Snapple Group (DPS) is facing the same difficulties. Even worse, the company is at a disadvantage versus larger rivals like Coca-Cola and PepsiCo in terms of brand power, geographical reach, and financial resources. Dr Pepper reported a fall of 1% in sales during the fourth quarter of 2013. Even if product mix and prices were favorable during the period, volumes declined by 4%.

Management says that Coca-Cola has gained core sparkling value share over the last 17 consecutive quarters, so the issue with stagnant soda volume is not a competitive problem, but related to the fact that consumers are choosing healthier alternatives over traditional carbonated brands.

This is weighing on the stock price: Coca-Cola has fallen by 10% year to date, and the stock is now trading at attractive valuation levels when looking at ratios like P/E or price to cash flow from a historical perspective. 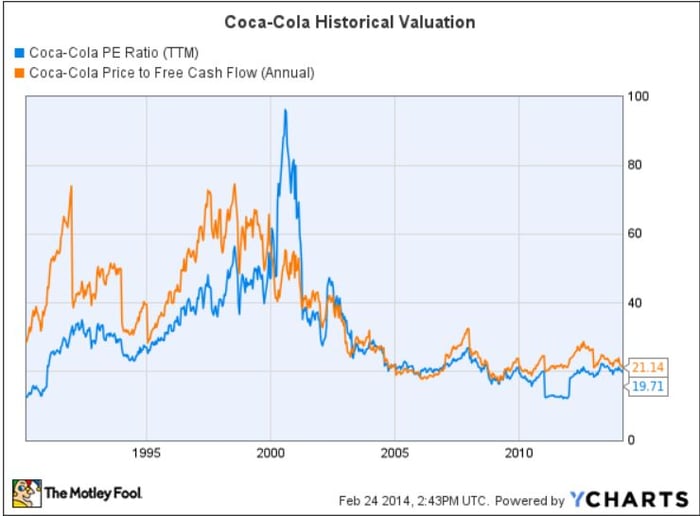 The glass half-full
Coca-Cola is well aware of the problem that stagnant soda consumption represents for the company, and management is planning to reinvigorate sales via increased marketing expenditures and product innovation in that segment. Coca-Cola has recently increased its marketing budget for 2014 by an additional $400 million, and the company is experimenting with alternatives like its naturally sweetened Coca-Cola Life in countries like Chile and Argentina.

Besides, Coca-Cola is also the global leader in still beverages, with $11 billion brands and a growing pipeline in the category. If consumers are going to replace sodas with other products, then Coca-Cola is stronger than any competitor when it comes to adapting to changing consumer demand and continuing to thrive over the years.

Coca-Cola estimates that 800 million new consumers will enter the middle class by the end of this decade, and the company believes personal per-capita expenditure will grow by 70% by 2020. Be it in carbonated or noncarbonated drinks, Coca-Cola is in a privileged position to leverage its brand recognition, global distribution network, and gigantic financial resources to serve growing demand from those customers around the planet.

Besides, Coca-Cola is a cash flow machine. Even in a challenging year like 2013, it returned $8.5 billion in capital to shareholders, and the company has recently announced a 9% dividend increase, which represents its 52nd consecutive year of uninterrupted dividend growth.

The dividend yield is currently 3.3%, so investors are being well rewarded for their patience while they wait for Coca-Cola to find a way to accelerate sales growth.

Bottom line
Coca-Cola is facing considerable challenges due to stagnant soda consumption in the medium term, but the company has remarkable competitive strengths to adapt to changing consumer habits, and it's already making considerable progress in growing segments like noncarbonated drinks. A high-quality company selling for a discounted valuation is usually an opportunity for investors, and Coca-Cola could fit that description quite well.

Andrés Cardenal has no position in any stocks mentioned. The Motley Fool recommends and owns shares of Coca-Cola and PepsiCo. We Fools may not all hold the same opinions, but we all believe that considering a diverse range of insights makes us better investors. The Motley Fool has a disclosure policy.