Consumers are trading down in the tobacco market and Altria is in a great position to benefit.

The tobacco industry is changing as consumers are shifting their buying habits to cheaper products in times of economic uncertainty, hardship, and rising excise taxes. Consumers are shifting toward value brands and shunning traditionally expensive brands such as Altria Group's (MO -0.92%) Marlboro and Reynolds American's (RAI) Camels in favor of value or mid-priced brands, such as Lorillard's (LO.DL) Newport.

Numbers reveal trends
Data supplied by Reynolds shows the scale of this 'down-trading.' Within a recent shareholder presentation by Reynolds, the company notes that since 2006, the number of premium cigarettes sold as a percentage of the overall volume of cigarettes sold within the United States has declined from slightly more than 70% to only 58.6%. Meanwhile, the value segment of the market has expanded to 41.4% of the total market, up from slightly less than 30%. 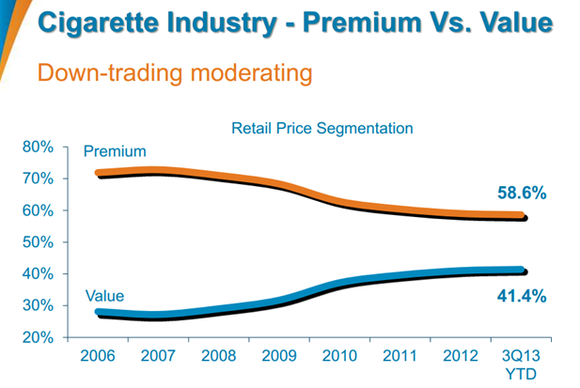 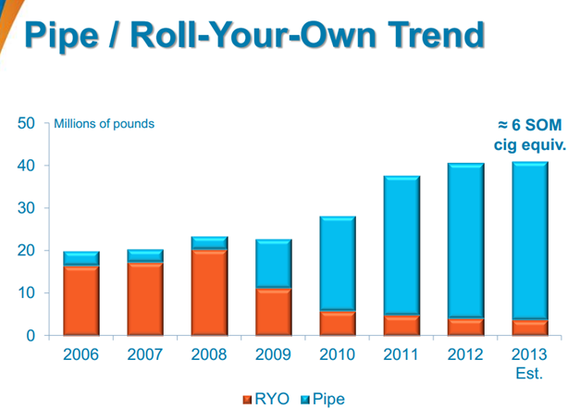 In comparison, the volume of L&M cigarettes shipped by Altria, which is the group's discount cigarette, actually increased by 3.1% for the period, which mitigated some of the declines in other product categories. With value-brand growth, Altria's retail share of the discount-cigarette market hit 4% in the fourth quarter of 2013, up from 3.7% at the end of 2012.

Overall, the volume of cigarettes shipped by Lorillard during 2013 actually expanded by 0.5% thanks to an increase in the number of Newport-branded cigarettes sold. Newport is by far Lorillard's best-selling brand with 33 billion units sold during 2013. The company's second best-selling brand Maverick only sold 5.2 billion units for the period. So, with sales of Newport ticking up 0.7% during 2013, the company's volume of cigarettes sold during the year remained relatively constant.

Still, with high double-digit sales declines across all but two of its brands, Lorillard's sales are slumping faster than the industry average. On average the volume of cigarettes shipped across the whole industry during 2013 declined 4.6%, this includes both the premium and value segments.

Foolish takeaway
The above information tells us how the tobacco industry is shifting toward a more value-oriented model and it would appear that Altria is in the best position to ride this trend. Altria has positioned itself well for the 'down-trading' currently occurring in the domestic tobacco market and the company is being rewarded with rising sales of its discount brands, which are helping to offset declining sales of its premium brands. Reynolds and Lorillard are not in the same position.

Rupert Hargreaves owns shares of Altria Group. The Motley Fool has no position in any of the stocks mentioned. We Fools may not all hold the same opinions, but we all believe that considering a diverse range of insights makes us better investors. The Motley Fool has a disclosure policy.