The consumer goods sector is down in 2014, but shares of Harman and Michael Kors are bucking the trend big time, as they're up 30% and 22%, respectively.

Harman International (HAR), an infotainment systems and audio equipment maker, and Michael Kors Holding (CPRI 0.65%), a retailer and wholesaler of upscale apparel and accessories, are bucking their sector's trend. While the consumer goods sector is down about 4% year to date in 2014, making it the worst-performing sector, these stocks have soared 30.1% and 21.6%, respectively, through late-afternoon trading today.

Harman and Kors have not only cruised past the performances of all their consumer goods brethren on the S&P 500, but also past most of the other stocks on the index. Their returns rank them No. 6 and No. 14, respectively, of the 500 top companies populating the index. (I'm excluding alcoholic beverage producer Beam, which holds the No. 10 spot, because it's being acquired.)

Before we look at what's driving the prices of these winning consumer products companies in 2014, let's get a better perspective on their performance by moving our time lens out to one year. As this chart shows, both have also significantly outperformed the market in the past year. 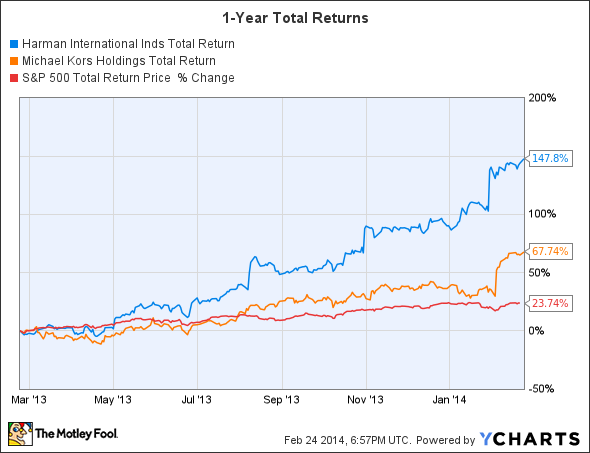 Harman International: up 30.1% YTD 2014
While Harman's stock price hasn't yet hit its peak level reached in the mid-2000s, it's come blaring back since being nearly silenced during the Great Recession, and is up 525% for the five-year period.

The company's strong performance in 2013 is continuing in 2014, thanks to crushing analysts' estimates and raising full-year guidance when it reported fiscal second-quarter 2014 results for the period ending Dec. 31, on Jan. 30. This makes the company four-for-four in earnings beats during the last year.

The company's much-better-than-expected results were driven by gains across all three of its business segments, due primarily to a rebounding auto market, as well as a strengthening of the economy, in general. Sales in Harman's infortainment segment, which provides premium infotainment systems to automakers for installation in new vehicles, increased 28%. This segment is Harman's largest, and accounted for 52% of revenue in the quarter.

Revenue in Harman's lifestyle business, which accounted for 32% of quarterly revenue, rose 16%, while sales in its professional business, accounting for 16% of revenue, leapt 45%. The lifestyle segment provides audio and electronic systems for vehicle, home, and mobile applications. Harman's professional segment provides audio systems for public places and to broadcasters, as well as lighting systems for commercial and entertainment occupancies.

With a price run up like Harman's stock experienced, the stock must have a high valuation, right? It's not cheap, but it's reasonably priced based upon its recent growth. And given its string of recent wins with automakers for its infortainment systems, there's reason to believe strong growth will continue. The stock has a forward P/E of 19.40, and a five-year price-to-earnings-to-growth, or PEG, of 1.0.

Harman's stock sports a 2.5 beta, meaning it's two and half times as volatile as the overall market; so it's not for all investors. However, investors who can stomach volatility might want to further explore Harman. Competition in the hot auto infotainment space is intensifying, so investors should closely monitor Harman's profit margin.

Michael Kors Holdings: up 21.6% YTD 2014
While Michael Kors describes itself as a "lifestyle brand for aspiring jet-setters," there's been nothing aspiring about the company's stock, as it's jetted 259% since its IPO in Dec. 2011.

Kors spectacular performance since going public shows no sign of letting up, as it once again zoomed by analysts' quarterly estimates when it reported its fiscal third-quarter results on Feb. 4. This marks the third consecutive quarter Kors has topped estimates.

Kors experienced significant growth across all three of its segments, as well as both its North American and international markets. According to CEO John Idol:

Revenue in North America grew 51% and comparable store sales increased 24%, with performance driven primarily by accessories and watch offerings. In addition, our North America wholesale segment generated another quarter of strong sales growth, particularly in our accessories and footwear categories, and we continued to benefit from shop-in-shop conversions in department stores. In Europe, revenue grew 144% in the third quarter, with exceptional comparable store sales growth of 73%, which we believe was driven by growing brand awareness and demand across regions. Lastly, in our licensing segment, revenue increased 59%, with continued demand in watches and eyewear.

Kors handbags have been especially hot sellers in its accessories category, and have largely been responsible for delegating rival Coach's stock to coach class in recent years.

Michael Kors remains a very attractive stock. Kors status as the "it" brand is showing no signs of slowing down, as the company continues to expand, particularly internationally. Investors can also play the Kors-mania card by investing in Fossil, as Fossil has been the exclusive licensee of Kors-branded watches since 2004, and the jewelry licensee for a few years.