While Facebook and Twitter receive a lot of attention from investors and the media, it turns out LinkedIn may be the one worth watching.

There is one social network that has seen astounding growth over the last year and may be poised for even more growth in 2014 and beyond.

Press wires have been abuzz lately over the Facebook (META -0.86%) acquisition of WhatsApp for $19 billion. While many have questioned the underlying financials behind the deal, the often-cited 450 million active WhatsApp users is one key point being used to justify the astounding price. Yet those questioning the deal point to the top line revenue of just $20 million to suggest the acquisition is destined to fail.

Many who are enthusiastic about Facebook point to the fact it has been able to churn profits -- $1.5 billion in 2013. The same can't be said of other social networking darling Twitter (TWTR), which lost a staggering $645 million in 2013 despite logging revenue of $665 million. Even its adjusted income -- which factors out stock-based compensation and other expenses -- still posted a net loss of $34 million.

While it may not be as glamorous as Facebook and Twitter, or draw the same enthusiasm from investors, three quotes from its management team show why LinkedIn (NYSE: LNKD) is a compelling investment consideration.

Last year we also made significant progress connecting the world's professionals and helping them build their networks. LinkedIn added nearly 75 million members in 2013, the largest single year gain in the Company's history. More than 70% of them came from outside the US, bolstering our status as a true global network.

Despite its common standing as the go-to and essentially only social network for professional purposes in the United States, the company has still been on an incredible streak of member-base growth over the last three years: 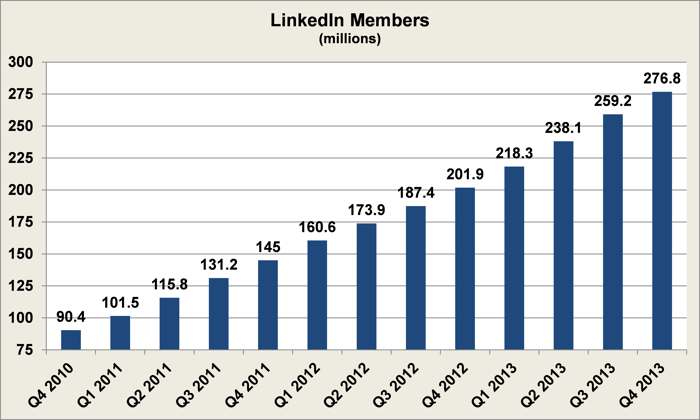 Another critical thing to note is the global expansion of LinkedIn's users, more than 66% of whom are now located outside of U.S. A key consideration in any investment in a richly valued company is its expansion and growth potential; that LinkedIn is both rapidly expanding and still has room for global growth is certainly worth noting.

The value we deliver to members remains consistent. We enable professionals to build and manage their identities, create and leverage their professional networks and gain the knowledge they need to be more successful in their careers across multiple screens and devices.

One of the unique things about LinkedIn is that it provides value to both individuals and institutions. It allows individuals to maintain professional networks and find jobs, while enabling institutions to successfully find the best people for open jobs. This is one key reason why both individual membership grew 37% year over year in 2013, but its corporate solutions customers rose by almost 50%.

All of this indicates LinkedIn is able to create and maintain value to its customers and clients, which ultimately translates to value for its shareholders.

We ended 2013 in a strong position across engagement and monetization, and we are investing aggressively in 2014 for both our member and customer platforms. We are making several key investments including China, jobs relevancy and scale and the publishing platform.

Certainly LinkedIn's performance over the last few years is distinctly admirable, but the company is clear in its understanding that more needs to be done to ensure its lasting value, and is prepared to make the necessary investments to ensure growth continues.

Weiner noted that 2014 was an "inflection point," for the company, and all signs are pointing to it being a year in which LinkedIn is poised to continue its torrid growth. While it is undeniably expensive -- trading at almost 80 times expected 2015 earnings -- LinkedIn certainly appears to have a bright future.

Patrick Morris has no position in any stocks mentioned. The Motley Fool recommends Facebook, LinkedIn, and Twitter. The Motley Fool owns shares of Facebook and LinkedIn. We Fools may not all hold the same opinions, but we all believe that considering a diverse range of insights makes us better investors. The Motley Fool has a disclosure policy.