Dillard's, Inc. ended the third quarter with too much inventory, so its weak Q4 results should be no surprise to investors.

In November, department store operator Dillard's, Inc. (DDS -4.33%) reported a surprisingly large year-over-year increase in inventory. At the time, Dillard's executives did not seem very concerned by this issue and projected that gross profit would increase for the full year. However, I warned investors the inventory increase was a significant risk that could force Dillard's to take margin-killing markdowns.

This is exactly what happened last quarter. Holiday sales did not quite live up to management's expectations, and as a result, Dillard's had to take higher markdowns to clear merchandise. The resulting drop in gross margin caused Dillard's fourth-quarter EPS to fall 10% short of the average analyst estimate.

The inventory risk
As a general rule, retailers' inventories should grow no faster than the rate of sales growth. During the Great Recession, retailers learned the tough lesson that having too much inventory leads almost inevitably to margin erosion. As "aging" inventory goes out of season, retailers have to take increasingly high clearance markdowns to sell it.

Through the first three quarters of its 2013 fiscal year, Dillard's sales rose just 1%. However, the company ended Q3 with inventory up 6% year over year.

Part of that increase could be attributed to a calendar shift, as the third quarter ended in early November last year, as opposed to late October in 2012. Still, the discrepancy between sales growth and inventory growth was larger at Dillard's than for other major department stores.

For example, Nordstrom's inventory was up 8.8% year over year at the end of Q3, but it had grown sales at a much stronger 4.7% rate in the first three quarters.

For Dillard's, which came into the holiday season with a bigger disconnect between sales growth and inventory growth, the gross margin problems were that much worse. The company's revenue momentum actually improved last quarter, with comparable-store sales up 2%. Still, retail gross margin fell by 180 basis points, more than offsetting good expense control.

The net result was a double-digit decline in Q4 net income compared to fiscal year 2012. This was partially offset by heavy share repurchases, which reduced the number of shares outstanding. Nevertheless, adjusted EPS fell from $2.87 to $2.69 for the quarter. 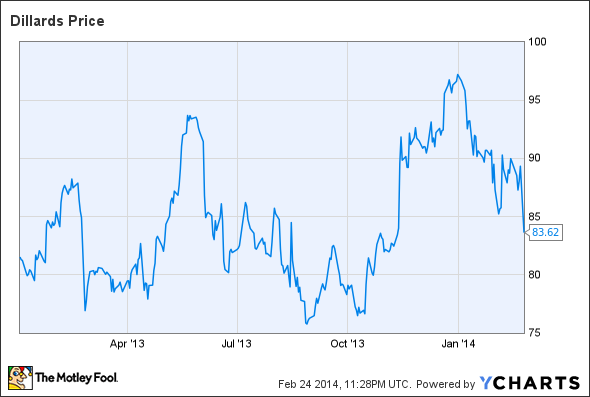 Dillard's ended Q4 with inventory up 4% year over year, which is still outpacing sales growth. Furthermore, there is no longer a significant calendar shift to explain the extra inventory: Q4 ended on Feb. 1 this year and on Feb. 2 last year.

Dillard's executives are notoriously tight-lipped, giving investors hardly any information aside from what is required by the SEC. The Q4 earnings report didn't provide any detail about the quality of the company's inventory or sales trends in the first few weeks of the new fiscal year. As a result, there's no reason to believe Dillard's margin troubles are over yet. Investors would be wise to stay away until the company proves otherwise.

Adam Levine-Weinberg has no position in any stocks mentioned. The Motley Fool owns shares of Dillard's. We Fools may not all hold the same opinions, but we all believe that considering a diverse range of insights makes us better investors. The Motley Fool has a disclosure policy.